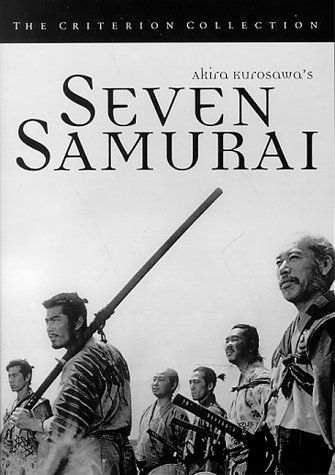 It’s time to look at a classic film that came out all the way back in 1954. People will remember that year as the Godzilla debut but this film also made some waves as well. It would later inspire other big films like The Magnificent Seven which grabbed this formula and improved upon it. Seven Samurai is a film with a decent premise but one that drags on quite a lot with padding being thrown in for most scenes. This film would have benefited from cutting out around 90-120 minutes and would have resulted in a movie with tighter pacing and a more engaging story. As it stands, it’s a reasonable movie if you really like the old samurai setting but otherwise I would highly advise checking out The Magnificent Seven instead.

The movie starts off with the villagers wondering what they should do. A group of bandits show up every year and steal all of their food and crops. If they strike again these guys probably won’t be able to survive. Some of them think they should just roll over and die while others think they should fight. They reach out to the village elder and he tells them to recruit some Samurai. It’ll be tough because they have no money and almost no food but it’s their best option. They manage to reach out to one samurai named Kambei for help. He tells them that they will need 7 Samurai in able to pull this off. Gradually they locate the rest of the samurai and head to the village to get ready to fight the Bandits. Will this group of fighters really be enough to take down the villains or are they all marching towards their graves?

So the main problem with this film is really the length. It’s well over 3 hours and you need to have a pretty good excuse to make your film that long. Very few films have gone for such a length because it’s so difficult. A lot of big blockbusters nowadays could easily stretch themselves out to 3 hours and you could see it working well like Mission Impossible, Avengers, Batman V Superman, etc but even those usually end up cutting content to stay under the 3. 3 hours is just a very long time and you have to have dynamite characters and a great story or it will inevitably drag out. So I always say that having a long runtime is not necessarily a good or a bad thing. All theatrical films should aim to at least be 2 hours but if they really know that they don’t have enough story for it than cutting it down to a shorter length is fine. That’s really what Seven Samurai should have done because the plot isn’t built for 3 hours.

What I described above is really the main plot. It’s very direct and you don’t need a lot of time for it. As a result we get a ton of what I’d call filler scenes. Characters just walking around, making faces, laughing with the locals, etc. There are so many scenes here that could have been cut entirely and other scenes that could have been trimmed down. You could definitely make this roughly a 90 minute film while keeping in all of the key scenes. It’s what the movie should have done because it’s not as if it does many things wrong. My negatives with the film are rather brief other than the length. It just made the film rather boring at times and you would often be waiting for the film to get to the next moment.

Another issue here is really that there wasn’t much of a villain. None of the bandits are given any real character development. They have absolutely no presence in the story and you would be hard pressed to remember any of their names if they even got any. This is a problem because that makes this a samurai film with no real fight scenes. There are general action scenes where the two forces collide, but there is no true battle scene where the heroes use their blades in battle. Every “fight” is just a one and done slice that ends the match in an instant. I would have liked to have seen some actual fights here as that would have made the film a whole lot more exciting.

Seven Samurai also goes out of its way to make the villagers really unlikable. You have one subplot where the father forces the daughter to cut off her hair and physically attacks her when she gets together with one of the samurai. Nobody does anything about this and it makes the samurai look pretty bad for just watching the whole time. I’d have liked at least one character to have stepped in and totally put a stop to it. At the end of the day they yell at the guy a bit but don’t do much more than that. That ties in a bit to the characters angle.

From the main characters the only real solid one was the quiet samurai who is really good at fighting. He murdered his first opponent after being forced into a fight and from there he took down a bunch of other enemies. He is definitely treated as the most powerful samurai in the film and that is pretty clear after his initial scenes. The others are strong enough I suppose as they all contribute. Kambei is also a reasonably solid lead and is good at making the plans. We don’t really get to see him fight much but you know that he is skilled.

How much you enjoy the film will probably also depend on how you enjoy the setting. This is taking place in very old times of course so don’t expect to see any sleek buildings or a modern Tokyo/NYC type environment. The characters are struggling to survive in a poor setting so everything can be pretty muddy and desolate. You definitely feel the desperation in all of the characters here since they’re about to fight in a life or death battle and the people they’re protecting don’t even trust them. It really puts the Samurai in a tough spot.

I’d say the best part of the film is the soundtrack. It can be a little overly dramatic for the scenes that are playing but I think a good soundtrack works even if it is misplaced. For example, a cool rock song will sound just as awesome whether it’s played during an emotional scene or a battle moment. So either way I liked the classic opera theme that would play when the characters were thinking. It was like a subtle darkness approaching kind of message. This theme shows up quite a lot and I was always happy to see it appear.

Overall, Seven Samurai is a decent film but one that is incredibly dragged out and is best to watch in short batches. The writing is okay and the film would have been greatly improved with some more action scenes and more interesting characters. With all the time we had I think you could have developed all of them with more personality. I’d like to see some in-fighting and that would have been a good way to accomplish both goals at once. Ultimately I don’t think you’ll remember most of the characters much after finishing this one but at long as you have one standout character that’ll help. So check this one out if you want to see a classic team up film but otherwise you can just jump ahead in time and check out a different title.