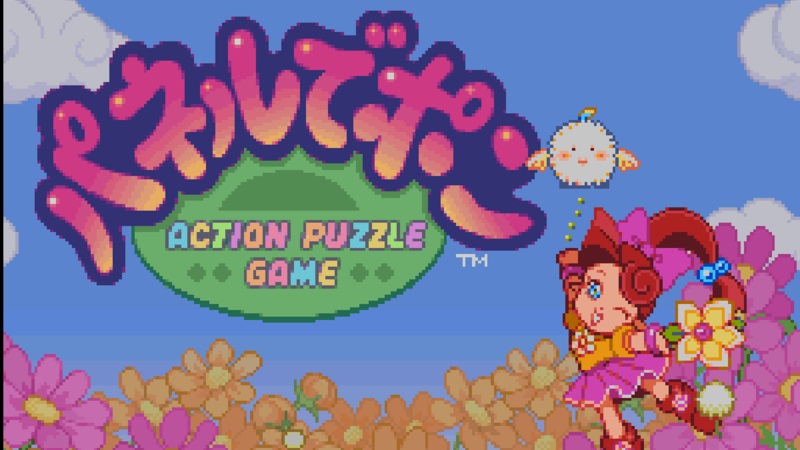 It’s time to look at a very obscure SNES game. I was pretty surprised they got this one for the latest update but it’s always nice to have more games to check out. The menus aren’t translated but it’s easy enough to figure out where you have to go. I started the equivalent of what arcade mode would likely be and ended up beating the first 3 chapters and a boss which was nice progress. The gameplay takes a little bit of getting used too after doing a lot of Tetris but I eventually got the hang of it. You certainly have to move fast or you’ll be buried in blocks.

There seems to be a bit of a plot. I assume that a demon lord is trying to invade the world and now the magical girls are asking you for help to stop this impending crisis. Along the way they’re teaching you how to play to see if you’re really worthy. I don’t know Japanese though so that’s my best interpretation of what’s going on. The game has blocks coming from the ground rather than the sky so think of it as a reverse Tetris. You have to match 3 blocks together in order to eliminate them. The key is to keep the blocks from reaching the top or you will lose. Once you have blown up enough blocks then the level will end and you’ll be safe. Boss battles work in a similar fashion except you keep matching blocks until the boss’ health goes all the way down. At that point you will have concluded the battle.

How you play is you move the icon over the blocks and then click to flip them. Your icon has 2 slots so you can leave one slot empty to move the block to it. Alternately you flip them horizontally so that you will be able to make more matches. It’ll take some trial and error at first but gradually you’ll start seeing patterns a lot quicker. That’s good because the levels get really difficult. I had quite a few deaths on the third level and a ton on the boss. It’s just hard to keep on matching when everything is going so fast.

One thing I’d recommend doing is to sometimes just randomly move pieces along in the bottom of the screen to get things moving. I found that I would make matches that I didn’t even know were there. I don’t think it’s the most efficient method in the longrun since you want to actually find the real pieces soon but if you’re in an absolute pinch then go for it. The worst thing to do in this game is hesitate or do nothing so just moving things around can really help you get a fresh perspective. It’s a pure desperation move but it did save me a few times. Well….that and the rewind feature of course.

The graphics are pretty solid here. The colors are very vibrant and it’s aged really well. This game could pass for being a bit newer than it actually is. At worst it may seem a little blurry at times but at best it’s all very smooth like an N64 title. The soundtrack is less memorable to me but it’s handled pretty well I’d say. It fits in with the game. It’s all pretty peaceful and serene.

Overall, Panel de Pon is a solid puzzle game so long as you really enjoy the gameplay. While I was starting to get used to it, it’s not quite as fun for me as traditional Tetris. There are less movements you can make due to the nature of the game so while the strategy isn’t any lower, it feels like there is less to do at times. The story probably could have also helped boost it up real quick if I knew what was going on. Still, it’s great that Nintendo is letting us play this game. I’m sure people probably thought the day may never arrive at this rate. If you like this style of gameplay then you should definitely check it out.