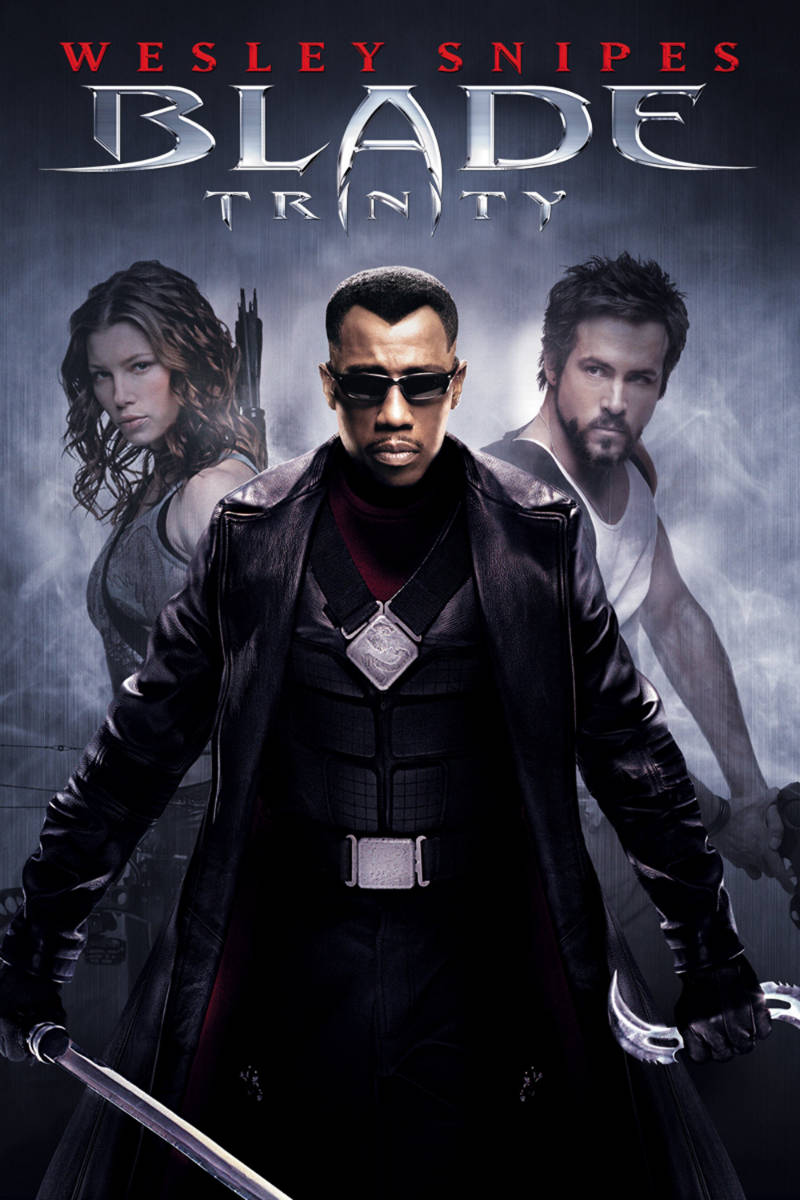 It’s time to look at the final Blade film. Does it end on a high note or end up disappointing? Well, it’s better than the first film but I wouldn’t say it’s as good as the second so it’s squarely in the middle. I liked that we got some more fighters this time around. It’s about time Blade had some backup. On the other hand, the plot feels pretty aimless the whole time and there isn’t much of a focus next to the first two. It feels like events just happen so Blade can go around beating people up. That’s not a bad story idea of course, but to me it felt like there wasn’t much of a plot beyond that.

So the movie starts with Blade murdering a bunch of vampires as normal. Unfortunately one of the guys he murders was just a human pretending to be a vampire. Unfortunately people see this so now the government is after him. The vampires have finally framed Blade. This lead to his capture but fortunately he is busted out by a pair of allies known as Abigail and Hannibal. They get him back to base and explain that Dracula has been resurrected. The 3 of them will need to take him out before the villains figure out the trick on how to be a day walker. This won’t exactly be the first time that Blade had to take down a powerful foe though so he’s ready for this. Blade isn’t the kind of guy who goes around losing fights after all.

I do have a bit of an issue with the opening. Blade is questioning why the guy didn’t die and is shocked to find out he wasn’t a vampire. We do have tons of familiars who are humans that Blade has been murdering throughout the films. Why is this guy any different? Seems to be like Blade is a little more surprised than he should be. Framing him would also be very easy for this same reason since he’s never cared who he murdered before. If they’re working with the villains then he ends them. End of story. That’s just how Blade works, he’s never been the kind of guy to even think about offering up some mercy. I’d be surprised if he were to stop now.

Unfortunately as part of the framing plot this does mean that Blade and Whistler spend a lot of time fighting off actual cops and government agents. You understand that they have to use some self defense, but this goes beyond that as they openly start shooting and bashing away at them. Whistler even uses a giant explosion that without a doubt murders a bunch of them. This is an ongoing trend that happens in numerous scenes. It feels like the heroes murder as many innocent people as villains in this film. It was a rather odd way to end off the trilogy. It does portray Blade as even more of a Punisher type of vigilante but I’m not sure if we needed that here. I think some of these scenes could have been cut or at least altered to show that they weren’t actually murdering anyone.

Beyond that Blade is still a solid lead though. He talks tough and is always ready to take the villains down. I like the new extended cable weapon he has since it’s very useful for taking down scores of enemies from a distance. If you ask me it’s easily one of his most useful weapons by a long shot. The Whistler gets his share of hits in as well. Without powers there isn’t a whole lot that he can do, but he’s always ready with background support. The two new characters are really the ones who are here to fight on the front lines.

First you have Hannibal who is mainly here to crack a lot of jokes. Apparently he used to be a vampire and got cured which is neat but it wouldn’t have made any difference if he wasn’t. This tidbit of knowledge doesn’t matter in the slightest. He manages to get a big win near the end although I can’t say it feels deserved since he should have lost that round. I found him to be a reasonably entertaining character although it would have been nice if he were a little stronger. Then you have Abigail who has an excellent opening scene and continues to look good throughout the film. She’s a solid hand to hand fighter and uses a crossbow that can even light up and burn opponents to death.

Blade finally has an ally who can really fight alongside him. She isn’t a vampire so she has no super abilities but her close quarter combat skills are enough for her to take multiple opponents down so that’s quite impressive in itself. She’s a big reason as to why the setup of Blade having allies worked. If both of them were comic relief it would have been a little pointless. As it stands, she can only continue to get better and better as she fights along with Blade and a fourth film with them would have been interesting.

As with the earlier films the fight scenes are really solid here. We get quite a few good battles and this time each character gets their own fight. This leads to a pretty wide variety of battles. Blade tends to have the best ones, but as mentioned Abigail’s was solid as well. Dracula’s battle with Blade is a highlight and we got a lot of back and forth there. Dracula’s character itself wasn’t amazing though. He spends his first fight scene running which is pretty odd for a guy who prides himself on being the King. You’d think that he would welcome a challenge right off the bat. I suppose vampires just can’t help but fear Blade.

As always the graphics are really solid here. The effects are on point and the soundtrack is also great. We get the classic rock themes that you always want to see. For the negatives, it’s really the same as always. The film’s pretty violent with everyone getting bumped off. There’s a lot of blood draining going on for sure. We also add a new wrinkle as we see dog vampires that end up getting bumped off. It was so completely unnecessary. The instant I saw the dog appear I knew the film was setting itself up for a fall. I’ll give the movie props for not having them die on screen but it’s of little comfort. The film would have lost at least a star if that had happened and if it lost 2 there wouldn’t have been any lower for it to go. The writing isn’t the best here, but it could be worse. At least the script tried being a little different from the previous ones.

Overall, Blade 3 had some good ideas but also faltered in others. On one hand it was nice to see Blade having some young allies who could actually fight alongside him and weren’t evil. The soundtrack continued to be really good too and amplify the fights. On the other hand, the film is as excessively violent as always and this time there were even animals. Additionally the plot itself felt the weakest. After Dracula resurrects and the heroes have their opening fights it feels like the film stagnates for a while until we get to the climax. It didn’t feel like the pacing was quite as tight as the last two films. I’ll give the 3 films this, they were all pretty consistent and roughly on the same level as each other. That may not have been a good thing for their score, but you can’t win em all.