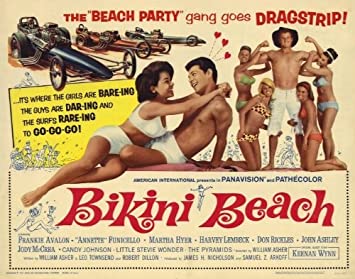 It’s time for another beach adventure. Unfortunately this one really doesn’t help the series. It’s basically the same as the last beach adventures and that’s an issue. There’s no real substance here and the movie basically brings in the same plot lines that it has been recycling over and over at this point. There’s not a lot of fresh content to be found and that’s a shame. I don’t think there’s a whole lot you could do with the premise anyway though. The beach just doesn’t make for a good backdrop in a film as it gets old pretty quick. It’s unfortunate but that’s just the way it goes.

The basic plot though is that a guy known as the Potato Bug has come into town. He wants to show everyone what true music is. Frankie still refuses to marry DeeDee so she decides to hang out with the Bug to make Frankie jealous. Meanwhile a local publisher known as Honeywagon has decided to prove that the teenagers are a menace to society. With his trained chimp he will make a monkey out of them yet. Much to the sadness of the main characters they are getting humiliated by this ape. He just seems to be smarter and faster than they are.

The film has a ton of weaknesses so let’s look at one of the few plots that actually was reasonably solid. That would be Honeywagon’s plot. He writes papers about how corrupt the teens are and you almost can’t help but root for him. The guy has a few legitimate points here because the teenagers aren’t really being all that productive. They’re just heading to the Beach and doing whatever they want for hours on end. They are always making jokes and messing with each other and they do this pretty loudly so it must be tough on the seniors. Honeywagon is proving that we have to get them off the beach and I had to agree. As the film goes on he naturally starts to weaken but even so I was rooting for the guy. I also thought he got a really good burn in when he explained that the teenagers weren’t even as smart as the monkey.

The rest of the plots aren’t very good though. For starters, the Potato Bug is portrayed to be pretty awful at just about everything. Even the singing seemed pretty bad and only half of the teenagers seemed to enjoy it. I don’t think he had much of a point in the film. He was only there to make Frankie jealous and either way that happens in pretty much every film. It’s not like it’s anything new at this point in the game. Frankie still won’t marry DeeDee no matter what tricks she pulls and she always goes back to him anyway. It’s not as tense since this always happens and Frankie has also proven that he doesn’t mind hanging out with someone while waiting for Deedee to come around.

In general I didn’t think the monkey scenes worked either. They tended to be rather boring most of the time. As always the film also suffers from a steady stream of fanservice as well. Pretty much no scene is safe from this and it ultimately takes away from the movie quite a lot. The movie starts off with a fanservice scene which sets the tone for the rest of the film. You can’t expect quality writing or pacing here either. This film feels quite long as it plays through and has virtually no replay value. There’s just not much good to be found in this film.

I guess I’ll give the climax some props here. At least we did get an extended fight scene with everyone. I could do without the chase scene but the fight itself was excellent. All of the characters got to contribute a bit with their haymaker and combos. Even Honeywagon got in on the action and seems to have some basic super strength which served him well here. Without Honeywagon the heroes may have been in trouble. The monkey also ended up helping even if that plot was always a bit cheesy. The whole film is meant to be cheesy though so that’s nothing new.

How much you enjoy the film just depends on how entertaining you find all of this. It’s got a lot of slapstick and is intentionally very over the top the whole time. The jokes are all recycled but meant to clearly still get their laughs. I like a good old fashioned comedy as much as the next guy but a film centered around the beach for laughs just idn’t going to work. What would have been interesting would have been if Honeywagon had taken the teens to court and we got some back and forth with the characters. Now that would have been pretty interesting and I dare say that it would have helped the film quite a bit. What we need is a winter version that takes place entirely in the courthouse. It would be a very different kind of film but that’s the point.

Overall. The main characters really prove Honeywagon right the whole time. All they can think about is hanging out and being at the beach. None of them are particularly serious or smart. Most of his burns land because the teens just can’t defend themselves. Some of them can’t even read because they’ve been at the beach too long fighting with gangs. If Honeywagon had ultimately won that would have been pretty cool and a great twist if you ask me. If you really love beach movies then I guess you can watch this. It’s pretty much the same as the rest of the beach films although with arguably a weaker plot than most. Really, that potato guy was just awful. Maybe that’s why the film has so many songs so you can try to forget about the story for a while. It doesn’t work though because the songs aren’t particularly good either. I’d definitely recommend taking a pass on this one.