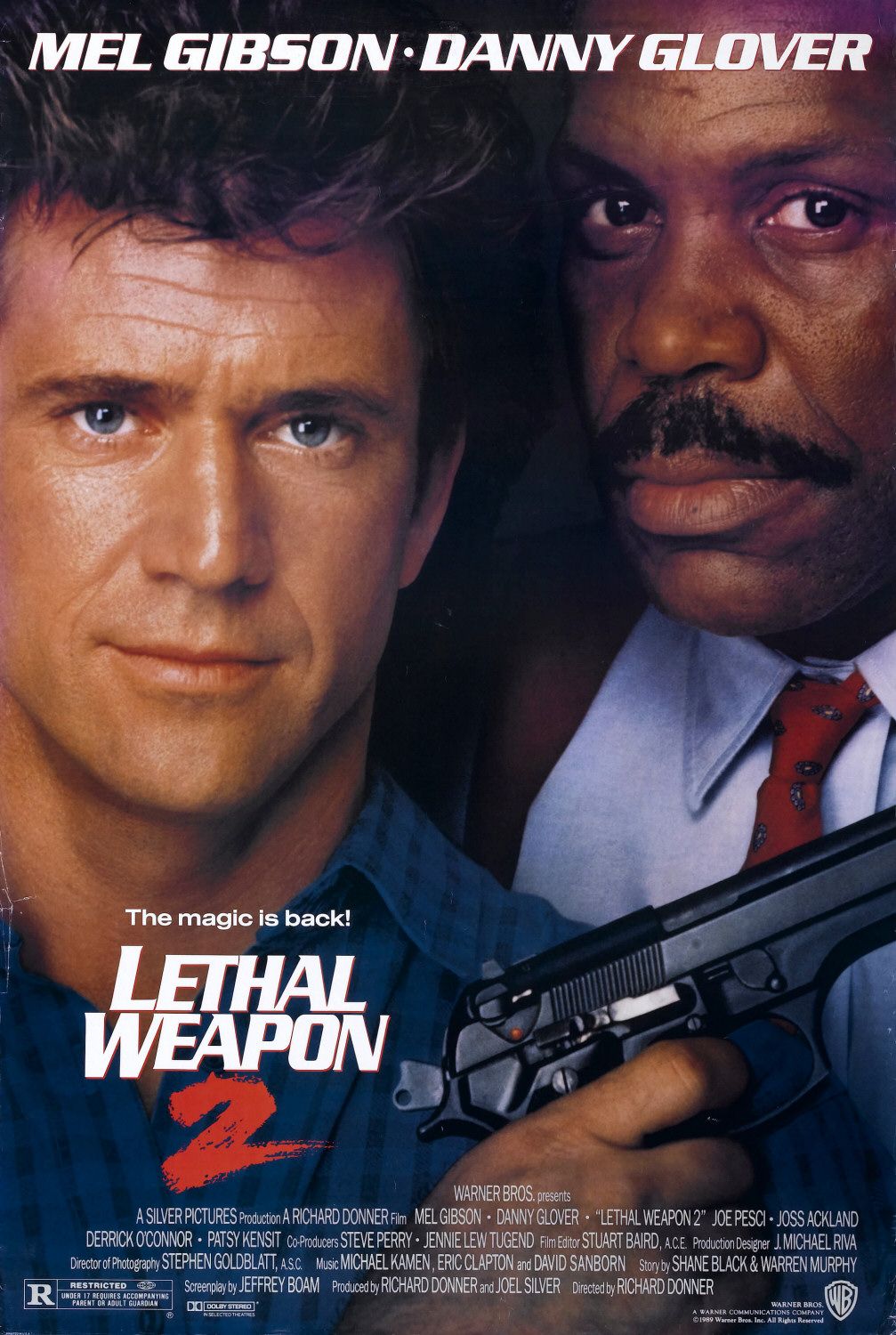 It’s time to look at the sequel to the original Lethal Weapon. Martin and Roger are back once again to mess with the villains and push themselves to their limits. It’s a pretty fun sequel although I wouldn’t say it’s as good as the first one. We get a solid amount of action and banter of course but it’s always tough to beat the initial team up between the characters. I’d definitely recommend giving this one a look. On the whole the only things holding it back are a rushed romance and a death that felt a bit gratuitous near the end. Having the character bumped off seemed unnecessary.

So the film starts with Martin getting into another high speed chase scene to stop some crooks. The case ends up spiraling out of control a bit and it turns out that these villains are part of a pretty big gang. Martin doesn’t leave it at that though and manages to track these guys down to an embassy. It turns out that these guys have diplomatic immunity. Their leader Rudd is quite smug about this since he can basically do whatever he wants with that card. While I think the film plays off the immunity a little too strongly (Openly being caught for a big crime would suspend it) the heroes are forced to back off and are officially told to drop the case. Martin is determined not to do so though and continues to hound Roger.

Most of the film is Martin basically tailing Rudd and making his life as miserable as possible. He breaks into the guy’s house multiple times, stalks him outside, etc. Some of these occurrences I think actually weren’t planned like passing him on the street since Martin seems surprised, but maybe he actually knew the guy would be driving that way. Either way Martin is definitely quite persistent and it’s what makes him a solid cop. He never backs down and intends to do whatever he has to in order to stop these guys. As with the first film he’s definitely a pretty enjoyable character.

Then you’ve got his partner Roger who’s always solid. He gives us a lot of good banter with Martin. The villains try to intimidate him several times as well but Roger never quits the case. He’s definitely made of sterner stuff and will take any risks needed. Now, he’s not quite as aggressive as Martin in this respect as he doesn’t mind hanging back. Roger goes more on the side of caution while Martin uses the YOLO method and does whatever he wants. It’s what makes them an effective team even if Martin does seem like he’s the one who does all of the work more of the time. Without Martin they would definitely be pretty doomed.

The heroes have a new partner in the form of Leo this time around. They’re supposed to be protecting him but he knows so much about the villains that Martin decides to use him instead. The film’s pretty tragic for Leo since he is trying his best to help the whole time but things don’t always go so well for him. The heroes letting him get kidnapped was just pretty iffy and Leo never really gets his proper respect. If you think about it, he gives them more leads than any other character. Without Leo they wouldn’t have made a whole lot of headway here.

Rudd is the main villain. He’s not really much of a fighter but he’s a strategist and you do need your leader to be intelligent so you can take the wins when needed. He’s fairly generic and I wouldn’t say that I’m a fan or anything but he’s not bad. He serves his purpose well enough and makes sure that the villains are a thread. His secretary Rika also gets a pretty big role. She definitely seems a lot nicer than the rest of his employees and really just needs the job. It’s more of a sympathetic background because it doesn’t sound like it would be easy for her to just find another job. She also doesn’t know all of the details of how corrupt they are.

As mentioned earlier, the romance in this film is pretty weak though. It basically comes out of nowhere and is extremely rushed. There’s no development or anything and they basically talk/meet for a few minutes before things heat up. It’s one of those classic Hollywood romances that just doesn’t work and really doesn’t contribute to the story. At most you can say it’s giving Martin some more motivation but with some other twists that come in later on he already had more than enough of this. These villains have definitely done quite a lot of stuff already as it is.

The film goes in a slightly darker corner by the end even if the overall tone of the film is fairly light. It shifts as needed for the scenes and these films definitely aren’t taking prisoners. It doesn’t move quite as quickly as the first film nor is the banter quite as prevalent. Still, this is a sequel that still does the franchise justice. It’s close enough to the first film where you can tell it’s a quality watch and I’ll definitely be ready with the review for the third film soon.

Overall, Lethal Weapon 2 brings in a lot of the fun dynamics and reasons which made the first film pretty good. Leo was a fun addition to the case as well. I’m not sure I bought the diplomatic immunity part for most of the film since they caught the villains red handed. I don’t think any kind of immunity would save you from that. The plot was definitely quite long and elaborate but that did keep the movie from having fun with mini cases and such. If you like a good action/thriller film then I recommend checking this one out. It’ll definitely keep you engaged as the film goes on.