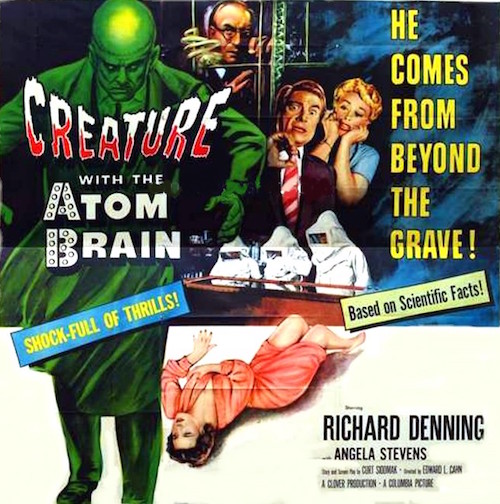 It’s time to look at a film that gets pretty emotional for a lot of characters because the body count is quite high. Characters are going down left and right before the heroes find a way to stop these guys. The Creature with the Atom Brain is a film that’s written pretty well and makes for a compelling movie. It’s one of those films you just don’t see nowadays. I say that a lot for these older films but that’s because it’s simply the case. You just don’t have writing like this anymore which is always a tragedy. The film is a lot of fun from start to finish.

The film starts with one guy swearing revenge on the gang that didn’t help him out when the going got tough. He gets a scientist over and they quickly use this sci-fi thunder formula to reanimate the dead. These bodies now have super strength and since they feel no pain they are bullet proof as well. They aim to take down all of these guys one by one until none remain. Pretty good plan eh? Things hit a snag when Chet shows up and figures out the plot. It’s hard to get people to believe him at first, but he does a good job of explaining and it’s hard to deny the facts after a while. Well, the cops and the army are ready now but can they really stop the zombies?

I always feel like the fighters are slow on the uptake here though. We’ve established that these guys are dead so why even bother shooting them in the chest? Realistically you should be aiming for the legs so they can’t stand well. Even if they can’t feel pain it’s not like they can block out the injuries entirely so if you ask me that would do a lot of good very quickly. Also, engaging in hand to hand with them seems like a bad idea as well. The climax is fun as we actually get a fairly big action scene but they didn’t play the matchup very well at all.

There’s also a higher body count than expected. The entire gang gets wasted and then you also have a ton of innocents taken out. The villains blow up trains, planes, and whole factories. It’s crazy how far it goes before the heroes are able to track them down. In fairness, there’s not much you can do once they’re right next to you with the bomb. People were always slow to figure out they were fake though. I guess they somehow don’t see that the head has been stitched back together? The only thing I can think of is that it’s for the viewer’s benefit and in the actual movie you can’t see any kind of stitching. Otherwise that would make the characters look really bad. In that case I can blame them a little less although the robotic movements + voice would still be a giveaway if you ask me. Hey, I can only cut them so much slack!

Chet makes for a pretty solid main character. He has a lot of good plans and does think things through more than most of the other characters. The only part of his character that doesn’t age well is how he wants to keep the family in the dark the whole time. Even when his wife tries to get in on the conversation he basically tells her to go away. She’s not handled particularly well in the film as we get a random scene where she chokes on a martini. Not sure how that helps anything. I think the writers were struggling with how to write a home scene at this point but not a whole lot of time is spent there anyway. For the most part Chet is always on the case with his partner.

It’s also nice to see everyone teaming up here. There’s no bickering or characters trying to one up each other. The community is in trouble so they all band together and get ready to face off against the villains. That’s exactly how this should go down so it ends up working quite well if you ask me. Part of the fun of the film is how things are always happening. There is quite a lot of action here as you might have guessed. Nobody is really safe and the film adds some tension when the villain breaks into Chet’s house as well.

While the main villain is pretty solid, the scientist is definitely very wishy washy. The guy’s creations have already murdered countless people and now he’s starting to want to back out of this? It’s far too late for this and he should have known that it wasn’t going to end well. Look, if you are going to betray the evil organization at least do so when you are holding the controls. The guy had the power over the zombies so he literally could have had them grab the other villain first and then surrender to the heroes. The problem is that the scientist still wanted to escape so he was probably hoping the other guy would have some ideas. Well, you can’t have it both ways and ultimately that’s why he was doomed from the start.

Overall, The Creature with the Atom Brain is a pretty interesting movie. Zombies can definitely be tricky to deal with, especially when the town was not ready for them in the slightest. It just goes to show that you’ve always got to expect the unexpected. Only by doing this can you really be prepared for the big villains that are to come. I’d be down with a sequel to this. So, if you are in the mood for a solid thriller with some sci-fi elements then this is definitely a movie that I would recommend checking out. While you may be hard pressed to remember any names by the end, the characters themselves are very solid. There is even a bit of a mystery factor here as the heroes try to figure out who is behind this.