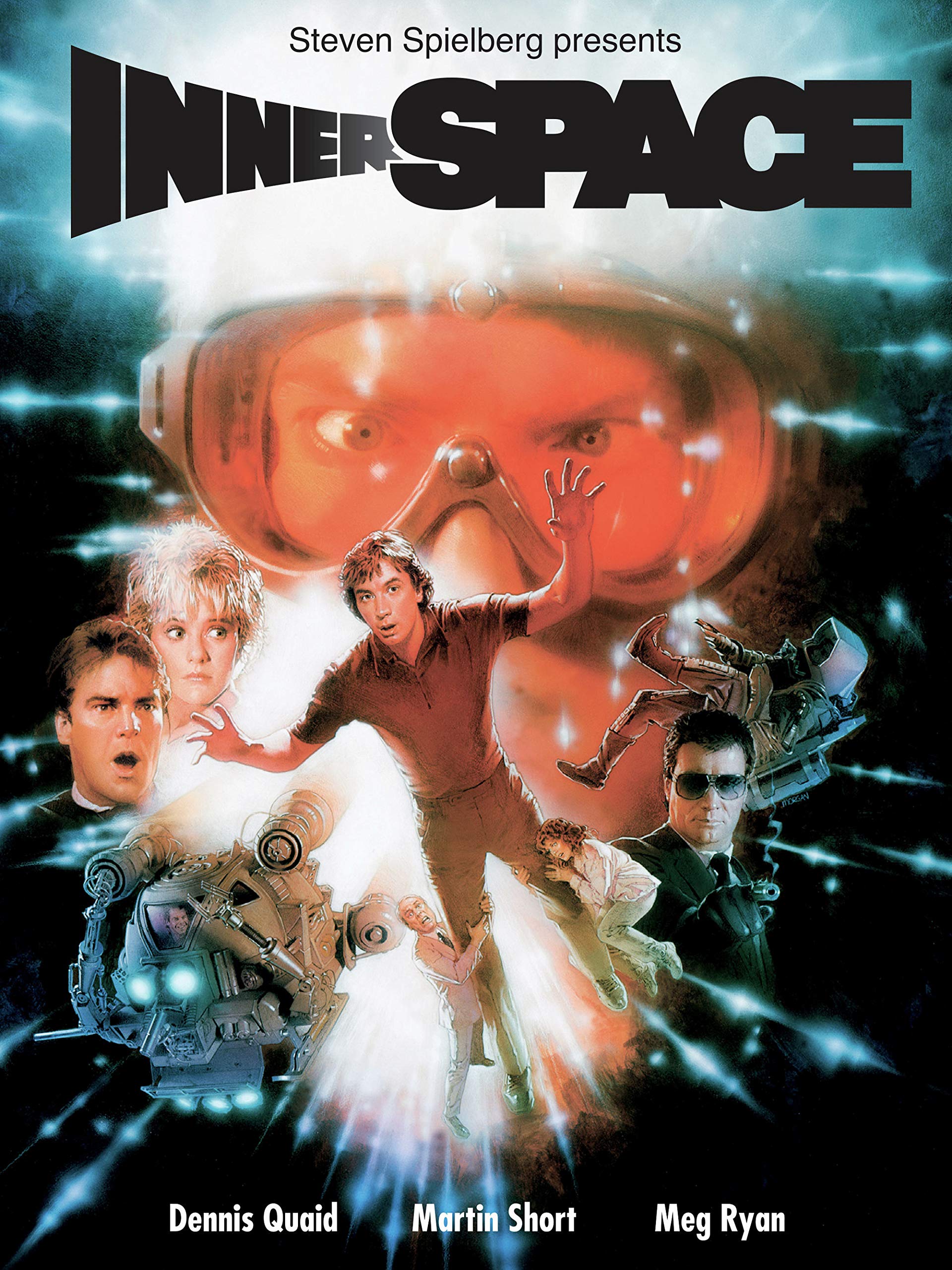 It’s time to look at a classic Sci-Fi film in Innerspace. This is not a film that I was familiar with back in the day so it comes across as a totally fresh experience. I’m not a huge fan of the premise of turning small in general as it’s not quite as exciting as going out into space but I’d say this film did a good job with it. Some of the opening scenes will feel especially painful like when something happens to Jack’s eye but for the most part the film is a blend of action and comedy so it balances those out pretty well. One of the villains in particular is a standout character here.

The movie starts off by establishing Tuck as a drunk guy who really threw his career down the tubes. He originally had a chance to do some great things with his life but that’s all over now. After Lydia left him for good, Tuck decided to volunteer for a life threatening experiment. The experiment is to turn him tiny and place him inside of a rabbit. Unfortunately a group of villains attack first so the doctor is forced to inject him inside a local grocery store owner named Jack. Tuck is able to establish contact with Jack so the guy can hear and see him. Tuck must now find a way to get this guy to take him back to the lab and restore his size. There is just one problem…Jack is an extremely nervous person who is afraid of just about everything.

One of the highlights of the film is definitely Igoe. He’s a villain who is meant to be like the Terminator. They even got an actor to look like Arnold which makes the role ideal. His hand also works as a gun and he’s part Cyborg. The guy goes around knocking people out like it’s nobody’s business. You just can’t mess with this guy. I’d say the best scene in the film is when he uses a guy as a baseball bat to knock someone else out and then jumps in the truck. Part of what makes Igoe’s scenes work is that he makes them all look effortless. He’s not sweating or anything like that. He just takes guys out like nothing. In a sense because of that it’s hard to have a satisfying climax for his character. Honestly I would have preferred that he went down fighting in a traditional fight or something with the characters using a rocket launcher or something. Still, you can’t deny that he elevated the film.

Then you have Tuck and the question is really if he can get past his initial scenes or not. The guy definitely destroyed his career and can’t really blame anyone for it. You can’t help but appreciate his gusto though. At least the guy is a good fighter and takes things in stride. I’d say he’s a little below average as far as main characters go but ultimately I would say he was entertaining. In a lot of ways he’s far better than Jack. I had quite a few issues with Jack to be honest. I’m cool with him being so scared of everything. It’s a decent character trait when handled well and I thought it was here. He has a delusion about getting shot while at the supermarket which is pretty crazy but certainly scary. You can definitely see why this would shake him up. He’s a very exaggerated character but much like Shaggy from Scooby Doo it can work as long as it’s not at the expense of putting everyone in danger.

No, my problem with Jack is the rushed romance plot with Lydia. Here’s the main issue with this, she was already with Tuck. Sure, they may not be actively together right now but when the ex is literally inside of you at the moment forced to watch everything…shouldn’t you just not make a move? Out of everyone you have to go for her right now? The romance was pretty terrible here. Lydia’s also to blame here as she seems to be okay with having an affair with both characters. It really doesn’t add anything to the film except for some extra drama which never really amounts to anything either. This should have just been skipped.

Early on I actually thought Lydia was a villain. She just looks a lot like one of the main villains for some reason. I also thought it made perfect sense with how quickly she left Tuck and it would explain why she wanted to put some depth between them. Ah well, that didn’t work out and so I can’t really give Lydia any extra props here. Ultimately she just wasn’t very good here and would have improved if the film had focused more on her being a reporter. She does have connections such as finding out when “The Cowboy” was going to show up. So I wouldn’t say the character cast was particularly strong here. In some films that could be deadly but this isn’t a movie that is particularly character driven. It’s really about enjoying the humor and the unique concept of having someone shrink and so you have to share a body temporarily.

Particularly back in the day I imagine it was a pretty new concept. It’s handled pretty well. I did like the humor most of the time and the film goes by pretty quickly. I’d say the writing was on point and you’ll have a good time here. Could the film have been better? Definitely, a better cast would certainly elevate the film somewhat. As it is, Igoe has to hold most of the film on his own. Jack’s character arc of finally getting tough just doesn’t work out nearly as well as you’d think. As long as no character ends up downright terrible it won’t crush the film so this one managed to survive throughout this.

The ending is also pretty solid here which is worth noting. It has one of those “cliffhangers” where it’ll likely never be resolved but ends things off on an epic note. Given how overconfident some of the characters can be I dare say that the villains may have a shot here. I also think a sequel could work out rather well. There’s always room for more secret agent films that have a touch of humor. Look at Kim Possible as an example of this. Comedy blends together with other genres rather well. Naturally execution is key as always, but I think a sequel could be quite fun.

Overall, Innerspace is a solid Sci-fi film. I definitely thought it was pretty funny at times and has a solid villain. It may feel like it overstays its welcome a tad bit in the second half with the romance plot between Jack and Lydia being rather pointless but for the most part this is a pretty solid concept that was executed well. (I wouldn’t have minded more scenes at the supermarket, I feel like that’s a setting that’s prime for a lot of jokes) I was also glad that Jack was fairly quick on the ball like when the first messenger showed up. When Tuck told him that the guy was fake Jack quickly sprang into action. A lot of times you see the heroes have a dazed look on their face as they wonder what is going on and that could be annoying. So Jack avoided that which I’d say was definitely a good thing. If you like comedy films with some danger then this is a good one to check out.