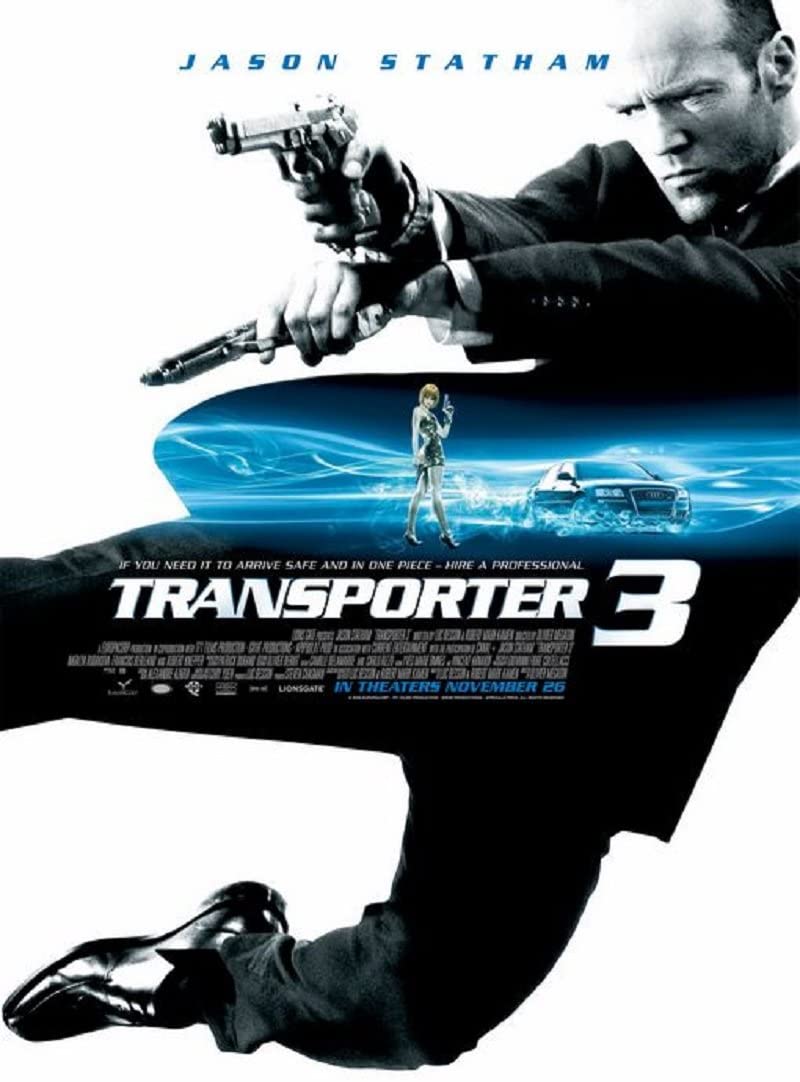 It’s time to look at the final film in the trilogy. The first two Transporter films were both pretty solid. I thought the second beat the first by a narrow margin. Unfortunately this one is quite a bit weaker than the first two. Essentially it’s going for similar themes and fights, but just ends up weaker in every area compared to the first two. While I wouldn’t say this is an inherently bad thing as losing to good films isn’t a problem, this film just isn’t that good. I’d say it does just enough to skate by on not being called a bad film but it’s a little too close to the line for comfort. It’s a shame because the film has quite a lot of potential with the premise alone.

So the film starts off with some scenes involving a giant boat trying to land but realizing that it can’t. The captain calls his Russian mafia friends and they confirm that they are close to finishing off the deal. They seem to have some kind of blackmail on the environmental minister. He’ll be signing their papers in a day so that they can offload all of their boats. The minister sends his men in to stop this but only a day is a pretty tough timeline. Meanwhile Frank is enjoying retirement. He turned down the latest assignment to transport and just relaxes with some fishing. Unfortunately his day is ruined when an old friend bursts through his window in a car along with a lady named Valentina. The guy dies since he goes too far from the car and then Frank gets mugged. He is forced by the villains to take the job of transporting a few packages along with Valentina to a far away destination. Now that Frank has the wrist device he also can’t go too far from the car or he will be blown up. The problem is that he and Valentina don’t get along at all. She’s quite antagonistic the whole time despite Frank’s best efforts. Looks like it’s up to him to get out of this situation.

I will say that the film’s beginning had a few warning bells. Nothing too serious to be honest so I don’t want to overstate it. The film’s problems would get worse as it went along. Still, the intro was rather dull. The scenes on the boat still feel pretty pointless to me. At the very least I don’t see why you would start with these scenes. Some guys break into the cargo area and die to the poison? I suppose this is to tip us off that the boat is related to criminal activity…but that was pretty obvious from the jump. The boat characters maybe appear for 2-3 minutes total for the rest of the film. We then cut away to fishing which also isn’t very exciting. The only good part here is the car chase while Frank narrates over it. It’s just a very slow beginning.

The other warning sign is that Frank doesn’t look very intelligent at all. He notices that his friend has a weird tech thing on his arm and the friend begs him not to let them take him to an ambulance. Frank ignores this and after they take him away finally realizes that it’s because the thing on his arm was a bomb. The friend dies of course. So….maybe we can cut Frank some slack because this might not be a common device. You see it all the time in movies but we could say it’s not normal. Still, you’d expect him to be a lot more on the ball with this. Getting knocked out shortly afterwards wasn’t a good look for him either although to be fair he gets quite a habit of getting beaten up when it’s a sneak attack.

I don’t mind the idea of having to stay close to the car though. It’s a good way to build up tension. You may have a hard time believing how he catches up to the car at times but it’s a solid plot gimmick nonetheless. Additionally, I still do like the fights in Transporter 3 even though they are a noticeable downgrade from the first two films. Gone are the days when Frank would win his fights with advanced martial art techniques. One thing I really liked about the first film was that he was shown to be an expert fighter. He was using crazy hand to hand techniques you’d never seen. I’d actually say as a pure fighter he is even better than Jason Bourne, Ethan Hunt, Dwayne Johnson, and James Bond. This guy is just an excellent fighter without a doubt. In this film he uses more basic moves. He still beats everyone up and looks generally impressive but the choreography isn’t at the same level. There are a ton of jump cuts. For that reason, the opening fight in the flashback is easily my favorite fight scene in the film. I thought a lot more effort was put into this one than the others that would come later on.

Where the film goes wrong is really with the main heroine and the inevitable romance that follows. Valentina is one of those characters who gives Frank quite an attitude the whole time. Typically I’m okay with characters having some attitude. She has no reason to trust this guy and it’s a stressful situation right? Well, the problem is that this isn’t totally true. We learn later on some interesting twists about her character but they completely contradict her actions. The film would have been so much easier and quicker if she had been upfront with him. Her reason for staying quiet at the end of the film is comically bad. It’s just hard to understand what’s going through her head. Not only is she unhelpful but she actively puts them in danger like with the whole scene in the grocery store.

This long scene which involves her getting drunk and really just undermining her character makes her look really bad. I can’t cut her any slack for these actions “because she was drunk” because she knowingly chose to get drunk and high during a situation when they need to stay sharp and not die. She also forces a romance between her and Frank by blackmailing him with a bomb. Seriously? That’s got to be one of the worst romance starters I’ve seen in a long time. Literally if he says no he blows up and he can’t walk away either…or he will blow up. Not a whole lot of options to him and she has fun humiliating him for a while. Naturally he ends up enjoying the romance so it’s not a problem for him but this was a really, really bad scene. This plotline was bad from start to finish.

Valentina’s character never rises above this. She tries to be supportive later on but it’s too little too late. I’d also mention that she does a poor job of trying to get the villain driver to slow the car when Frank is behind them. All right, that’s enough on her character. Frank is a decent lead but he looks far worse than in the last two installments. Putting aside the romance and his getting mugged at the beginning of the film in addition to him not realizing about the friend, he even endangers his friend. It’s a comedy scene but he heads to a mechanic he knows and asks the guy to look over the car. We then get a big fight scene where the film resists the urge to use oil for a third time straight although you know it was close since they were fighting with cannisters. The friend asks if it’ll be okay since all of these big villains will wake up soon and Frank just says to go home. They all saw the guy’s face and presumably know his name. Frank just didn’t seem to care. We also just generally get less scenes of Frank humiliating everyone with how good he is in a fight. The guy is an old pro at how this works so showing more of that like in the first two films would be a good idea.

I’d also argue that the final scene of using the bomb with the main villain put Valentina in danger needlessly. As it is the explosion threw her under some rubble. She was okay but it could have very easily gone sideways and her death would have been really pointless there. Frank just can’t help but show off I suppose. The Inspector returns as a supporting character but his scenes feel a little pointless at this point. It’s the same ole jokes from the first two films and he’s always far too late to really do anything. He seems like a nice enough guy I suppose but you get the feeling that he was squeezed in.

Man, this is sounding like a negative review right? I’d say it’s just because the negatives of the film are so noticeable. The positives are still there but just not as strong as they could be. The soundtrack is pretty solid for the fights. I’d say that the lyrical songs we get are pretty weak though. The film succeeds as a thriller in the sense that we do have a lot of nonstop action and fights when the characters are on the road. I enjoyed the chase scene where you have the two black cars on the highway. The cars looking almost identical works pretty well for solid visuals while they’re bumping back and forth. There was some nice strategy used here as well. In general the film always delivers with the chases. There are less jump cuts than with the hand to hand fights as well which is good.

Overall, Transporter 3 is a downgrade from the first 2. The heroine is no good and her actions just don’t make sense especially once we get her flashbacks. It’s a shame because her character had potential as a tough female lead who could keep up with Frank. Her father is certainly presented as a tough figure at least. He actually talks back to villains and doesn’t just roll over with the blackmail. The guy’s got a ton of pull for an environmental leader. I didn’t realize they were quite so tough. At the same time, Russia always has a rep for being very tough so it was nice to see this guy keep that persona as opposed to losing it just because he was a good guy here. If you liked the first two films then you should still check this one out since it completes the saga. It’ll still deliver on the usual action and fight scenes that you would expect. The writing and everything else just experience a bit of a decline here so it’s easy to see why they didn’t go forward with another one in this saga. I think someday they should do a nostalgia fourth film though. The film just needs to focus more on the Transporter angle and give us some solid fight scenes.