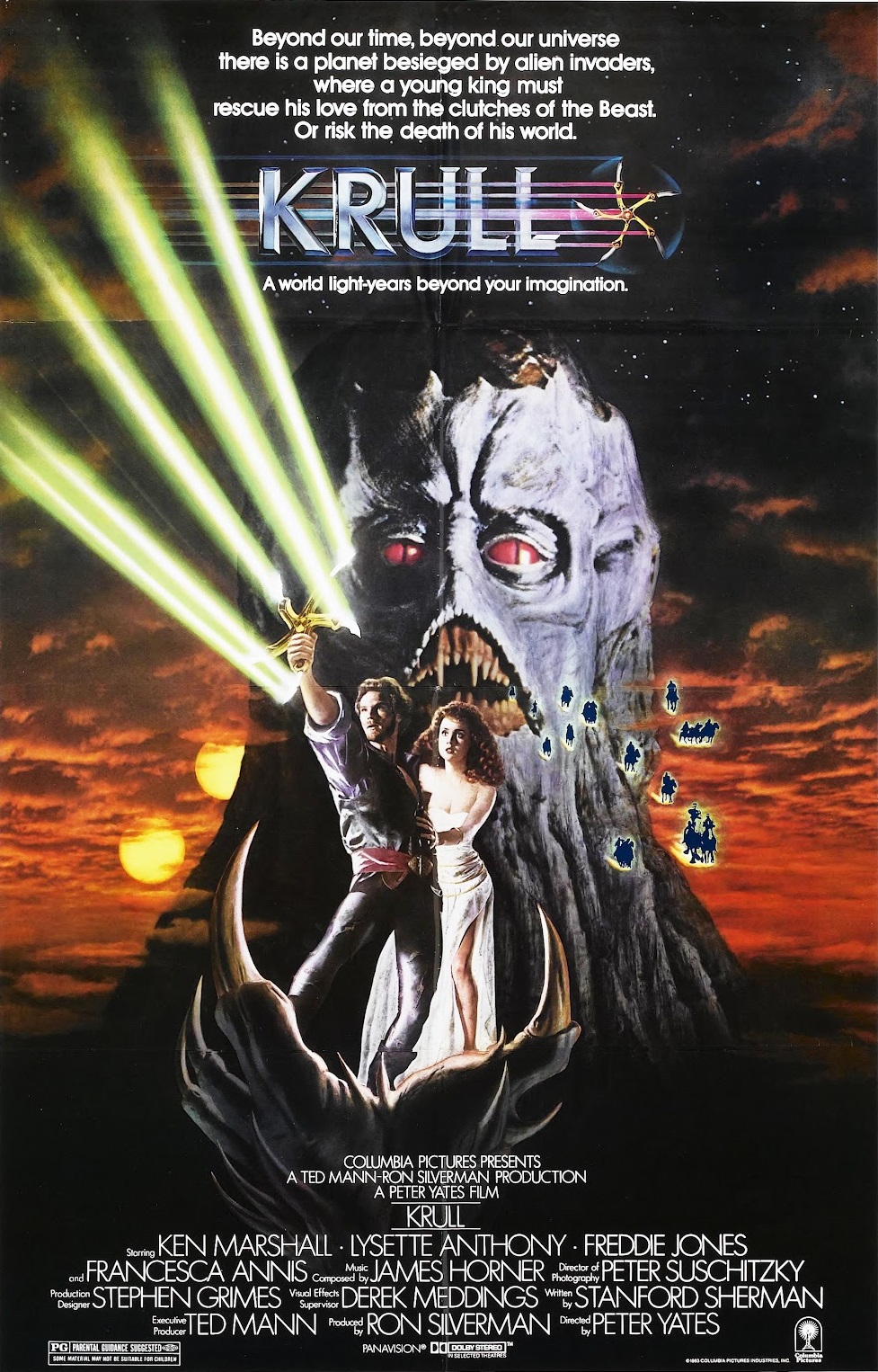 It’s time to look at a classic Sci-Fi film from a while back. This one is definitely going for that classic Lord of the Rings feel with a bit of Star Wars thrown in. That said, aside from the energy blasts and a quick scene at the beginning it’s harder to see that. LOTR is first and foremost the angle this one is going for. I wouldn’t say it did a poor job. It destroys the Lord of the Rings with ease of course. The film may be a tad slow at times but it’s an adventure that will keep your interest and the climax makes for some good action scenes.

The film starts by introducing us to the Slayers. A group of monsters that have taken over many planets over the years. There is seemingly no way to stop them and so they have quickly become one of the driving forces of the universe. They are led by the Beast. On one planet two kingdoms decide to unite so that they will be ready. Princess Lyssa marries Prince Colwyn so they can usher in a new era. Unfortunately the Slayers couldn’t care less so they break in and kidnap Lyssa anyway. Both kingdoms were burned to the ground and just about everyone was murdered. Colwyn swears to find Lyssa. Fortunately an old man named Ynyr agrees to help him. The two will find more allies along the way and Colwyn is given an ancient weapon to use to slay the Beast. Will this be enough to turn the odds?

It’s interesting that for the magical weapon they went for more of a Shruiken Star/Chakram disc as opposed to a sword. It’s certainly more original so I’ll give the film props there. It’s also just a handy weapon in general since you can throw it and then it will return to you like a boomerang. You can’t go wrong there right? He’s told not to use it until the end of the film though so you don’t get to see it in action for very long. It does look good at the end although I got nervous when it was stuck on the villain. That would have been rather anticlimactic but it’s just that Colwyn couldn’t draw out its full power.

The scenery and effects are fairly good. The forest and deserts here aren’t exactly my ideal setting but the film did a solid job with what it had. There was definitely a good amount of effort behind this one and that’s the important thing. The fight scenes are pretty solid and I like the energy blasts. The kingdom’s soldiers had solid armor but they all looked terrible so I guess it was just for show. The villains turning into mini xenomorphs when their masks break was definitely disturbing. It makes you wonder exactly how they are able to operate the larger bodies. Must be high tech. It can make for a bit of a violent look at times but that’s mainly just the color of the creatures themselves.

As a lead Colwyn is pretty good I’d say. For starters he easily resisted the charms of an enemy agent. Even entertaining the notion would have been a death cry to his character since the entire point of this journey is to arrive and save Lyssa. Messing that up would have had me shaking my head to be sure. You just can’t make that kind of mistake and he didn’t. Colwyn turned out to be a solid leader and he was resolute in his quest. He may not stand out a whole lot as someone you’ll think about in the future but he did everything he needed to do.

Then we have Lyssa. She certainly wasn’t very intimidated by the Beast with how she kept talking back to him so she gets points there. She doesn’t get a whole lot to do here as part of the fact that she is captured for most of the film. It’s regrettable but expected. If we ever get a sequel hopefully she could fight more. The Beast himself is definitely a lot like Sauron with the huge eye. I can’t say I was a fan. His whole goal is basically to marry Lyssa aside from ruling the universe. Why? It’s a goal that just seems pretty much out of the blue and it’s always hard for me to get on board with a villain like that. A villain’s motivation is a huge indicator of if I will like the character and this didn’t work out.

Then we have some supporting characters like the shape shifter Ergo. He’s a fun enough character. He’s going for Usopp vibes where he talks a really good game but at the end of the day he is scared of just about everything and isn’t all that strong. By the end he has his big moments of course but we’ll see if you can take it seriously by then. Then there’s Rell who is a peaceful Cyclops. I wasn’t a big fan of his character. He doesn’t really add much to the story beyond having another ally at the ready.

What fantasy epic would be complete without the old man who serves as a mentor to the lead right? Ynyr is here to provide guidance and even gets his own subplot where he has to infiltrate a spider lair. Unfortunately I can’t really give him a lot of props here. The subplot was one of the weakest parts of the film which is the first mistake. There didn’t seem to be much of a point to having this in at all. We learn that his son was murdered and it involves the master of the lair. The whole thing gets pretty intense but it has nothing to do with anything. Why not just have the first fortune teller find out the truth? I felt bad for that guy, left defenseless by the rest of the group and picked off with ease. The heroes aren’t always the best about staying together and often times that was Ynyr’s fault since he would ask to be left alone. Unity is when the heroes are strongest so they shouldn’t split up so easily.

The soundtrack has that Star Wars feel to be sure. There are a lot of happy themes that play throughout that should fill you with hope and energy. They’re all rather solid. Perhaps not the most original themes out there but they still do the job and give you the correct ambiance. At the end of the day this is a fairly light fantasy adventure even if by the end the body count is rather high. The climax itself is very serious and I got a Rogue One feel from it. When you go on a mission like this I suppose you never expect everyone to live through it. That’s just not going to happen when the villain is of this magnitude.

Overall, Krull works rather well. Old school fantasy adventures usually aren’t my thing so adding in the brief Sci-Fi bits definitely helped out. The Slayers have solid designs even if I would have preferred that they kept them and not turn into little lizard things when they blow up. At times the film may go through a few slow patches here and there but for the most part it’s pretty consistent. If someone tells you to watch LOTR or the Hobbit, tell them to watch this one instead. It’s not very well known but a lot of effort definitely went into it initially.