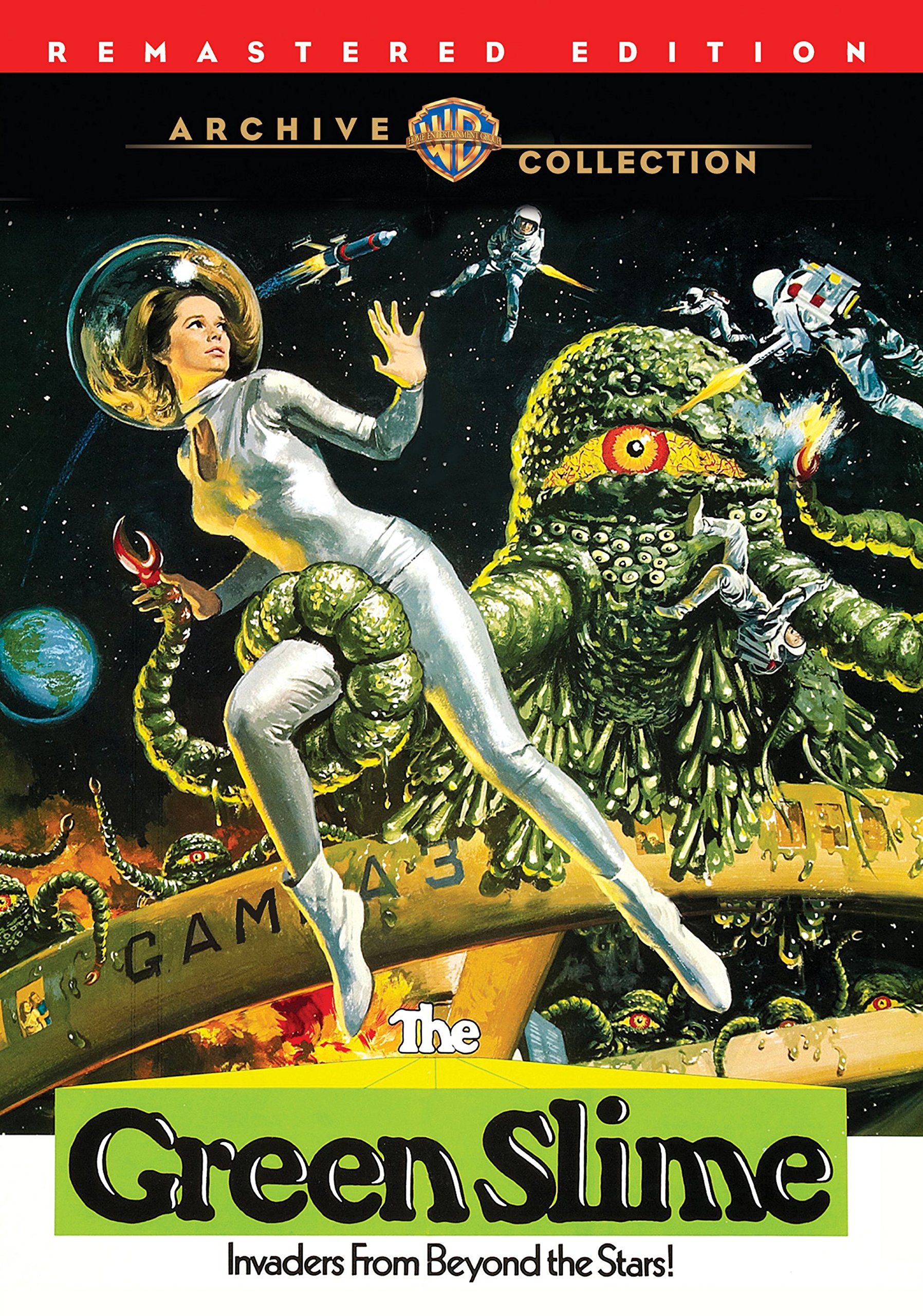 Now this is a pretty amazing film title right off the bat. Who doesn’t want to watch a film that sounds like it’s about a ton of slime? This is a gold mine and the best part is that we all know it. You can’t get around the fact that this just sounds incredibly hype. The Green Slime is not to be trifled with and it’s got a fairly decent monster design. It honestly looks more like a minion then the big bad for most of the film but I can respect it. It’s also got enough special abilities to make it a little more impressive than the average monster. Classic lasers won’t be enough to stop this guy.

So we’ve got another mission into outer space. The team is going to be led by expert astronaut Jack. The difficult part is that Vince wants to come as well because he’s always had an inferiority complex around Jack. This is for many reasons. Jack’s always been known as the best guy in town and he also used to date Lisa who is now with Vince. Vince may have become commander of the space station while Jack has been promoted to other duties but he can’t escape the man’s shadow. Perhaps if they both go on a space mission together Vince can prove that he’s better than Jack. Well, the mission goes decently well but they are forced to head home pretty quickly after some complications. The issue is that they brought the slime back with them and it turned out to be a semi sentient monster bent on eating all the electricity it can find. It absorbs energy like a sponge. Is there any way to take this guy down?

A good portion of the film is the rivalry between Jack and Vince so how much you enjoy the film will depend on how much you like that aspect. It’s pretty fun although I consider it to be incredibly one sided. For starters, Jack is actually a great astronaut. He’s not all talk and consistently makes better decisions than Vince during the film. Jack is all about following orders and doing things by the book while Vince wings it. He also never puts people in danger for no reason. Vince intentionally makes a risky decision just to mess with Jack and it ends up costing some lives. Vince knew it was the wrong decision but did it to spite Jack. That’s when I knew that he had absolutely no chance here.

Jack’s no saint though. While he and Lisa are over and done with he tries to reclaim her after arriving back on the spaceship. He knows that she is with Vince and does this anyway. Not very sporting of him. The guy’s massive confidence works against him in this instance. He’s a solid lead but that’s one part of the plot where you just can’t root for him. He’s made it clear time and time again that the job is most important to him so you can’t really get around that fact. Meanwhile I don’t care for Vince because of his lack of confidence and how he keeps messing everything up. Lisa’s a solid heroine although I think she could take a harder stance against Jack. As long as she maintains control of the conversation she can keep him at bay and that would be the best way to go about things if you ask me.

Still, while they may not be super likable as characters, it makes for a lot of fun scenes. I’ll tell you right now that the characters are a lot more memorable then you may expect for an ole sci-fi film like this. You aren’t likely to forget about them anytime soon. How about the monster? Well, he’s pretty much mindless if you ask me but he does land some good shots. Usually that’s because the heroes move very slow but he still gets his wins so I have to acknowledge that much. He has a Swamp Thing type design while in human form. Mix in the regeneration and accelerated growth and I maintain the stance that he is a little stronger than your average monster from this era. I’d like to see more of a wide scale invasion but the idea of having to deal with a monster while you’re isolated in space is a strong one. Who knows, maybe Alien got the idea from this film. I wouldn’t be too surprised.

As expected the writing here is definitely on point. The dialogue is pretty sharp and all of the characters try to sound very eloquent even when disagreeing with each other. The pacing is solid and the movie is just very enjoyable. I do question how the slime got past the sensors when Jack even insisted that they all get scanned twice. I think they need to invest in some new ones and quickly or this won’t be the last invasion that they have to fend off. The effects have aged pretty well and so this film has really executed on all points. There are a lot of ways you could do a sequel to this one even if by now the odds of a sequel are fairly slim.

Overall, The Green Slime is definitely a movie that I recommend watching. If you like the Sci-Fi genre or just want a tense film about dealing with a creature then this is the one for you. It’s got action to keep you entertained and a pretty good monster to work as an opponent. What he lacks in character he makes up for with pure ability. When you think of a Sci-Fi film you think of an adventure in outer space with an alien. This one really captures all of that and it’s part of what makes the film so good. It really embraces the Sci-Fi genre and I wouldn’t have it any other way. The body count does get a bit high though so you’ll definitely feel bad for the crew as the movie goes on.