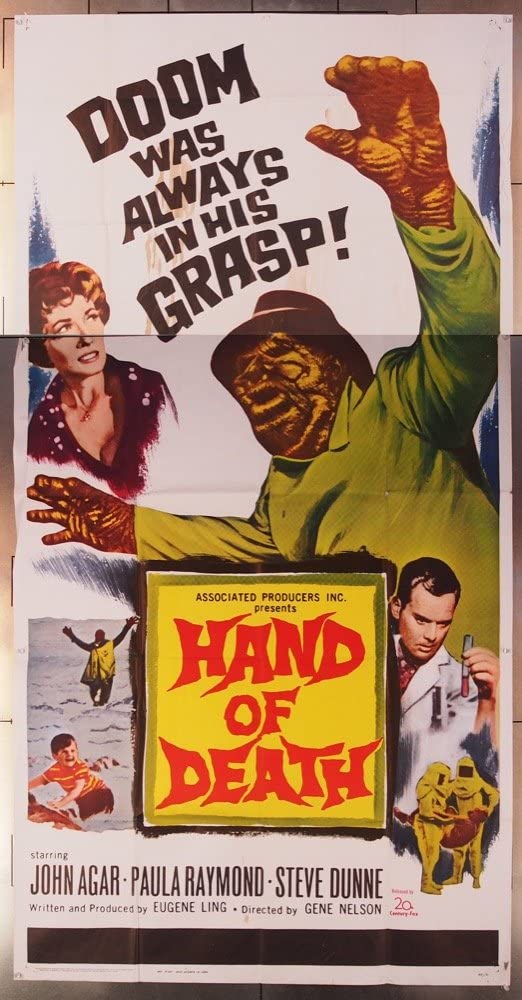 Sometimes when you turn a film on you know right away that things are going to get pretty deadly. The title itself can be a pretty good indicator of that after all. Well, this film’s definitely pretty solid and you’ll be glad to have checked it out. It can be a bit by the books at times of course, but at the end of the day it’s all executed well. The film’s pretty short though so it really breezes by. You really feel like they don’t make 1 hour movies like this anymore. Granted, I always think a movie should be as long as possible since it makes the experience even better but if you know ahead of time that the plot won’t hold then going short makes sense.

The movie starts with a driver noticing that something’s not right as there are a few sheep fast asleep inside of private property. He rushes inside and is promptly knocked out. When he wakes up a scientist named Alex lets the guy know that they’re running some secret experiments so he better not tell anyone. Alex is glad this happened though because it proves that the serum is safe on humans. He rushes home and explains to Ramsey that he has built the ultimate weapon for war. You can spray a whole country with this gas which will immobilizze them and also make them susceptible to hypnosis and all kinds of commands. Ramsey lets Alex know that their lab isn’t for war but Alex wants to proceed and Ramsey allows it. Alex is rather clumsy though and splashes himself with the mixture. He has now become a walking monster of death. Anyone he touches will surely perish. Alex threatens Ramsey that a cure must be made and soon or he’ll start murdering people. Can Ramsey make the cure in time or is the town already doomed?

One thing that was a bit surprising is how crazy Alex was. At first you expect that he’ll be your standard hero but the movie doesn’t really play out that way. Now, you can make the case that the mixture turned him crazy and he was actually a good guy otherwise. I have my doubts but it’s certainly a valid argument. The guy just dials it up to 11 though as he instantly threatens Ramsey and isn’t very reasonable about anything. I felt bad for the old guy because Ramsey did warn Alex that this was a risky endeavor. It’s hard to sympathize with Alex as much as you could have since he actively goes around murdering people. If it felt like he was a little more hesitant then that would help but I just did not get that vibe from him.

This does play into the interesting dynamic between him, Carol, and Tom. Technically Alex is with Carol but Tom seems to like her and she decides to mess with Alex to get him jealous. Mix that in with the fact that Alex is never around while Carol and Tom have to work together all the time and the whole thing already seemed dicey. It definitely put in some warning bells for Alex because the film had to do something to have one of them win. I think we know how that went now. Carol’s a reasonable character but I wouldn’t say she handles the situations all that well. She tends to panic quite a lot although at least she wasn’t really the fainting type. Then you have Tom who is pretty confident the whole time. I do feel like his sudden lunge at the end was all to bait Alex into charging to get shot. Maybe I’m reading too much into it but it seemed like it was all part of an elaborate plan.

Ramsey was the best character. It’s just a shame that there’s not a whole lot that he can do. The guy can’t really walk all that well as it is. His final scene was a bit odd though because it made no sense. It’s like he lunged at Alex which I’m sure was not the intention but it certainly came across that way. At least you hope that wasn’t what he was trying to do because it wouldn’t really make any sense. As the film goes on there is a pretty decent body count stockpiling up. Most of the characters were just trying to have a good day so it certainly didn’t work out for them.

The design for the monster isn’t bad but he definitely doesn’t look too intimidating. I’d say it’s sort of like a cross between the Thing and Swamp Thing. The fact that Alex can’t really talk all that well in this form doesn’t help matters for him. As expected the writing is pretty solid here. The characters are on point and it makes the whole experience pretty interesting. As I mentioned the film is pretty short so the pacing is also very fast. We even got to have the detectives and cops show up near the end which is always fun. Having the government get involved tends to bring any monster film to the next level and they looked pretty good here. They were definitely ready to deal with Alex and his super powers.

Overall, Hand of Death is a very accurate title. A single touch from this guy and that’s game over almost instantly. It’s a very lethal ability to the point where it could be very lethal in war as well. Of course you have to get close enough to touch someone so if you’re shot then I suppose this won’t be doing you a whole lot of good anyway. It’s a very basic movie with a small cast and a direct plot but I wouldn’t say that it has any weaknesses either. The fundamentals are very sound and that’s really all that you need. These retro horror films tend to be some of the best in the genre. They just don’t make them like they used to.