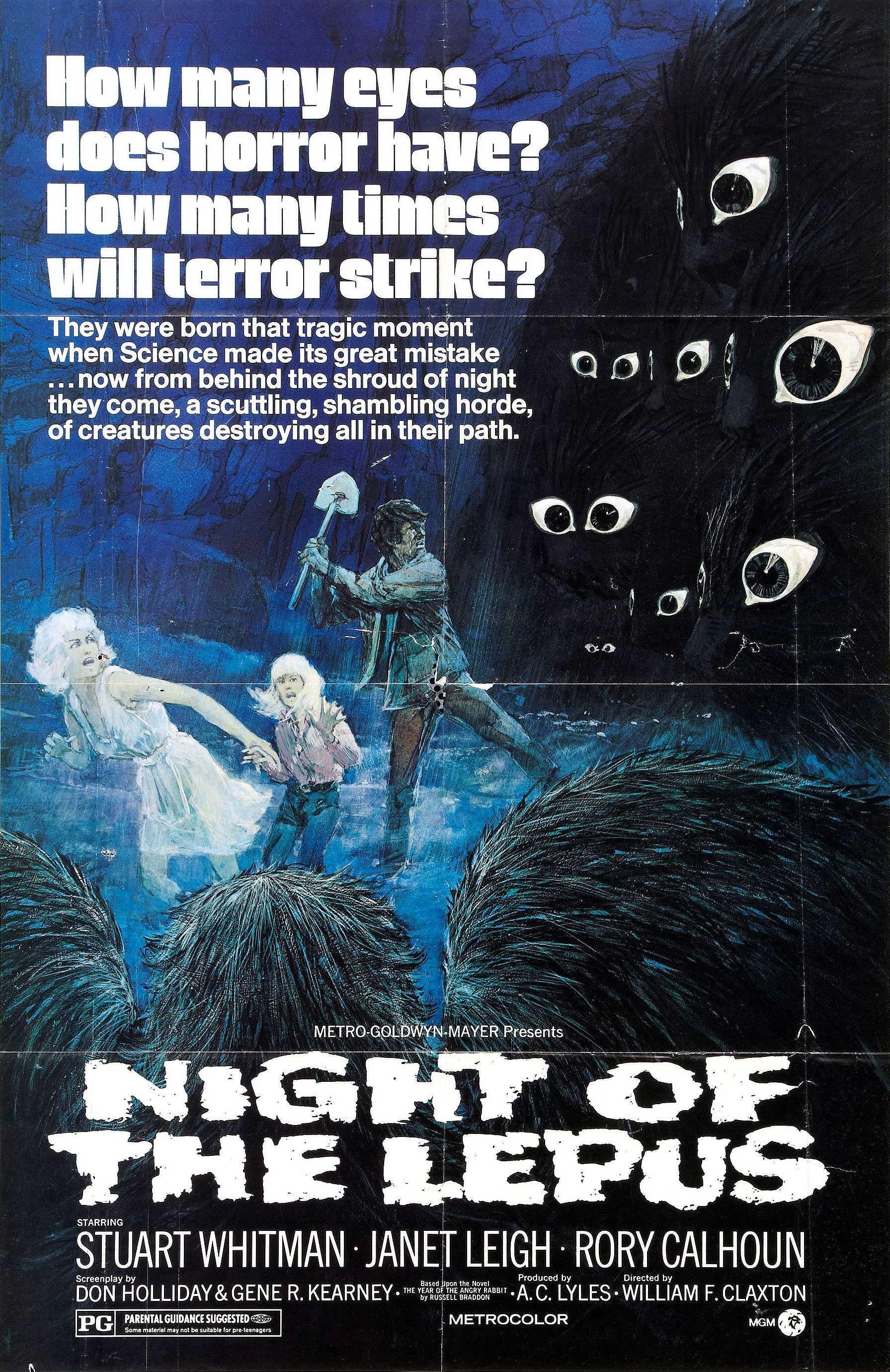 The instant you know what the plot of this film is you know that you haven’t exactly picked out a winner. Evil rabbits? Yeah I don’t see any way that could work out well for any of the parties involved. It’s a quick recipe for massive animal violence on all sides and the film doesn’t disappoint there. It’s pretty unique so I’ll give the film that. You don’t see a whole lot of movies about evil rabbits, it just isn’t done and I guess now we’ll see why. The main thing to remember here is that if you’re being chased by evil rabbits just calmly stay in your car and drive forward. One character did try this but unfortunately a ditch got in the way. Nothing much you can do in that case I suppose.

The film opens with a farm being completely overrun by Rabbits. While this may not sound like a huge issue it does upset the balance. The rabbits are eating all of the crops and wildlife so nothing can grow. One farmer suggests using poison but the ranchers are against this. If they do that then nothing will grow here for a long time so they will have effectively doomed themselves. The other farmers are worried since the rabbits will keep on spreading. Well, Roy and Gerry are called in to put a stop to this. Roy thinks of a solution which is to stop the rabbits from breeding but it doesn’t work and then his daughter decides to mess with the experiment. She frees one of the contaminated Rabbits and it quickly runs over to meet up with the rest. Now the heroes are dealing with an army of angry Rabbits who are not only larger than the average animals but also more vicious. Now it’s the Rabbits ensnaring the humans all around them. Will there be any escape from this menace?

I do have to mention right away that I was surprised at how Amanda (the daughter) never owns up to the fact that she is directly responsible for so many deaths. Nobody ever finds out that she is the one who let the Rabbit out and she doesn’t feel guilty about it either. She never apologizes about it and you’d be forgiven for forgetting that it was even a plot point. If not for her meddling then this film wouldn’t have lasted so long presumably. Of course she didn’t know any better but it’s why the kid characters tend to hold everyone back. Without her the farmers may not have been in great shape but they would have lived to tell their tale.

As for the actual main characters, Roy and Gerry are okay. I wouldn’t call them particularly memorable but they do their jobs of researching this predicament and trying to come up with a solution. Ultimately they basically fail but I suppose it was a worthy attempt. There’s just not much to say about them. They’re just reasonable people but don’t have much character beyond that although you could say the same for most of the characters here. Take the Sheriff. He’s a good character, a solid leader who does his best to end the threat. You really can’t say much about him beyond that though and that’s the underlining issue with some of these characters. I did like the train conductor though. At least that guy had a presence with how he could barely even be bothered to get up and help with a Rabbit army on the way. He clearly couldn’t care less about most of this.

The film’s final plan of having a bunch of cars turn on the lights and get in a row was interesting but I wonder how effective that would really be. It’s good the people didn’t panic. I was shocked at just how eager they were to get in and help. You certainly wouldn’t expect to see that nowadays. There’d be panic and people running every which way instead of just following the orders. The Rabbits did their best to disperse but ultimately it’s not like they’re bullet proof so when up against the whole army they were doomed.

We don’t get to see the Rabbits during the day much at all but design wise they’re effectively just a lot bigger and have sharper claws. Beyond that they’re effectively normal Rabbits. I wouldn’t have minded adding on spikes or something to make them look extra dangerous. It’s not like it would save the film though. It almost goes without saying but I still need to say it. What holds this film back a whole lot is the fact that there is a lot of animal violence. The heroes shoot the rabbits, stab them, etc. Of course it’s every man for himself in this film but even so you never want to see the Rabbits get injured. It’s the reason why making a film with the Rabbits being super evil is basically impossible. Either you win without injuring any of them in which case the film would likely get a lot of shots for not having any tension or you do fight back against the Rabbits and get yourself in a whole mess. Either way it doesn’t exactly bode well for the movie.

You’ll also feel bad for some of the characters who get bumped off. For example there’s a nice old lady just minding her business at the store. The instant she is introduced you know that she is doomed and minutes later her fate is sealed. Her character only existed to get bumped off and everyone watching the film knows this. The sad part is she would have possibly lived if she had made the wrong choice and not pestered the Sheriff to go and see if anything was wrong. So effectively she got punished for doing the right thing. It’s a pretty sad moment for her character to be sure.

You’d expect a horror movie like this to have a big twist ending but it’s pretty low key. Basically it sort of hints at a sequel as you can assume that the one left has powers so it should start to spread them again. It may take a little while though and it’s just not as spooky as it could have been. How I would have ended the film would be to have the characters drive home only to have the trunk pop open and a giant Rabbit jumps out. It then slowly walks towards the leads as the music swells up and then lunges at them along with a gunshot sound and then fade to black. Now that’s how you get a suspenseful end scene. Perhaps a bit cliche, but effective nonetheless.

Overall, Night of the Lepus is a pretty bad film. It’s not very surprising though. That’s what you get when you have evil rabbits running around. None of the characters are particularly memorable. If anything they can be annoying. Amanda put everyone’s safety at risk and her friend was willing to keep the secret. He didn’t put the pieces together but forcing her to ditch her pet was a pretty bad first impression. The heroes are just lucky that the townsfolk were so cooperative this time. It’s rare that you see everyone band together to fight such a common foe without any real resistance. If you want to check out a horror film then I definitely advise skipping this one.