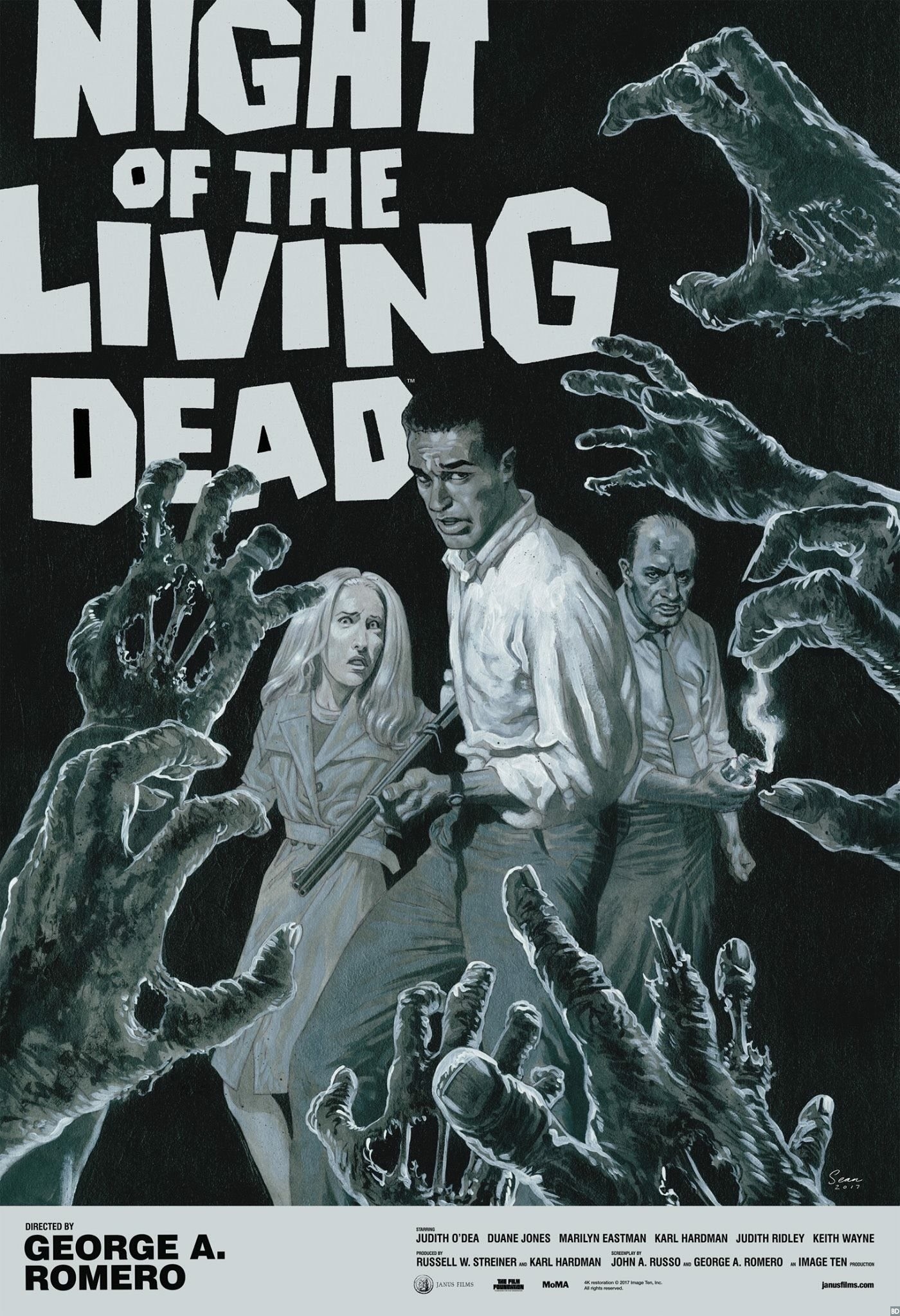 Night of the Living Dead is quite the title right? I imagine that just about everyone has to have heard of this film. The zombies owe a whole lot to this one. It’s a pretty interesting look at the classic horror feeling of knowing that you’re surrounded and there’s no way out. The film does start to go into edgy territory towards the end though trying to be more gritty than necessary. It definitely fumbles the landing and while it will keep your attention, I wouldn’t say this is a good movie. One character in particular also gets pretty annoying very quickly.

The movie starts with Barbra and her brother visiting a grave. He’s trolling her as usual when a guy starts walking towards them. He jokes that the guy is here to murder Barbra and unfortunately he’s right. The brother is able to distract the guy long enough for Barbra to get away but is murdered in the process. She escapes to a house but unfortunately there are a lot of these zombies running around. A man named Ben shows up and he’s also been on the run from these guys. He tells her that they have to make a stand in the house for as long as possible and boards things up. They’re not along though as it turns out that you’ve got Harry, his wife Helen, Tom, and his wife Judy along with an injured kid who got bit by one of the zombies. If you’re familiar with your films on contagions and stuff, being bit is never a good sign. Can the heroes really make a stand here or are there just too many zombies?

The toughest part about these kind of scenarios is that you don’t know how many zombies there are or how long you have to hold out. These questions nag in the back of your mind the whole time. It’s part of what makes titles like The Walking Dead or Resident Evil so popular. It’s easy to get behind a survival story as you try your best to stay alive as long as possible. I’d argue that it’s part of the appeal of Fortnite as well. It’s just fun to test your limits. Where the film goes wrong is in the more shock value type scenes. We actually see the zombies eating people which can be pretty graphic. There are quite a few scenes where you see them chomping on limbs and such. It definitely makes you shake your head because it really wasn’t needed. The atmosphere is enough to really make you feel the fear of the zombies and why they are so intense. You don’t need to throw the violence on top of that, it’s just not necessary.

As for the characters, well Barbra definitely stands out in a bad way. After the opening scene where she does a good job of running for safety and doing what needs to be done, she freezes. Now, the adrenaline has run out by now so I do expect a little crash. The worst part is that the crash lasts for pretty much the entirety of the movie though. She never gets to a point where she is a fighter after that and has no good ideas. It’s a shame but she definitely doesn’t help matters as the main heroine. Then you’ve got Harry who just likes to argue about everything. His idea to stay in the shelter is pretty terrible.

Here’s why it’s an awful decision. When you go down there you have absolutely no exits. It’s blocked by a locked door..and that’s about it. The zombies will eventually punch through and you don’t have a lot of options after that. Ultimately you would have to go back into the house anyway but this way you don’t have any protections and the zombies can be anywhere. It’s obviously a smarter idea to lock up the house and do what you gotta do. If you do have to escape it’s much easier to do when you’re already up and about as opposed to hiding in the basement. So it’s no secret that I was completely against Harry’s plan. It just makes no sense. Then you’ve got Tom who was at least willing to help. It takes Tom a little while to actually pick a side but he ultimately does which is the important thing. He never goes traitor the way that Harry does. Then you have Helen and Judy although their roles aren’t huge. Judy sort of cracks while Helen does well although it takes her a while to make a move.

That leaves us with Ben who’s certainly the most experienced member of the group. He’s been taking down zombies for a while not and knows how to fight them. He’s definitely fed up with everyone right now though and feels like they’re holding him back. They definitely do slow him down quite a bit between Barbra freezing and Harry actively trying to murder Ben. Ben handles the zombies pretty well for most of the film although at the end I’d say that he got a bit sloppy. I suppose there’s not a whole lot he could have known about the situation though so I’ll give him some slack there. It made for a pretty intense ending that’s for sure.

I was glad that we actually got to see the government get involved. It feels like a lot of the time you don’t get to see a whole lot from them here. It makes sense that they would be gearing up to stop the zombies though. The scenes of the professionals discussing things and making plans was nice. It’s always good to see everyone banding together to stop a threat like this and humanity is united rather well. I do feel like they would be able to defeat the zombies rather easily when you think about it. A head shot is all you need and the zombies are incredibly slow. As it stands I feel like the main characters should have been a little less nervous about things at times as you could pick them off pretty easily. Honestly if Ben had one more fighter with him then they probably could have just taken them all down. With two people it’s a lot safer to actually go in and start bashing the opponents. With 1 you gotta be careful since they do have a little super strength so any good hit could turn the tables.

Overall, This is probably still a better film than most zombie titles. It’s not exactly one of the better horror genres if you ask me so for the most part this one was rather decent. If they would just tone down the cannabalism and the violence then this could even be a winner. You even have the horror twist type ending which is always classic. Throw in the brief Sci-Fi angle and the government part and there is definitely a whole lot to enjoy here. I get the feeling that this will end up beating the sequels as well. If you want a suspenseful film about trying to survive in the middle of nowhere then this is probably an appropriate one to check out. Otherwise there’s always the original Home Alone about defending yourself against powerful forces while all on your own.