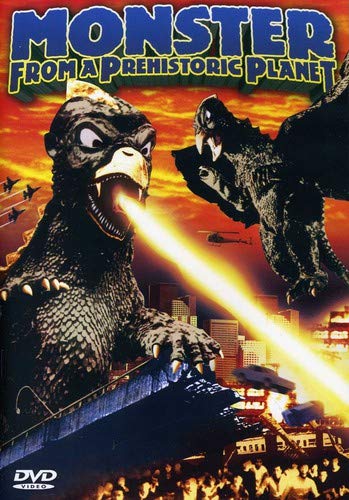 It’s time to look at a pretty retro Kaiju film. I wasn’t familiar with this title before watching it so it was pretty cool to jump into this world. It’s a pretty standard creature feature. I wouldn’t say it’s particularly great but avoids making any key mistakes. The Kaiju have cool designs and do a thorough job of stomping on all of the buildings. One thing’s for sure, these monsters are definitely playing for keeps!

A group scientists head to a nearby island to try and get some research for a magazine. Ultimately their head wants to open a resort and he’s not the kind of guy that you want to let down. That being said, the heroes end up with more than they bargained for when they run into the monster known as Gappa. The islanders warn the heroes not to take him away or he’ll get upset. Hiroshi and the others laugh this off as they bring him back. The President has decided that this monster will put their magazine on the map and could even be a star attraction once he’s tamed. The monster’s parents aren’t particularly thrilled about this though and head off to save him. They don’t intend to let anything get in their way. Will the government be able to stop these monsters or is it all over for them?

This is one of those films where you won’t find yourself rooting for the heroes at all. Put it this way, they’re kidnapping an animal from its natural habitat just to get rich and famous. Sure, only the President is after the money but the rest are going along with it since they want to keep their jobs so it’s not like they’re really standing up for the monster at all. If I was Gappa I would definitely be upset as well and I can see why his parents had to step in. This is one of those cases where the humans just seem really corrupt and could not be trusted. The creatures don’t know any better and were just trying to live in peace. It’s why it’s always hard to root against the monsters in these instances.

The first half of the film can be a bit slow. The Kaiju attacks feel like they don’t really start until well into the second half of the movie. The first bit has the heroes explore the island for a while and messing with each other. We get a lot of banter between Hiroshi and Itoka but you can make the case they would come out of that more as enemies than friends. Hiroshi certainly took a lot of shots at her the whole time that you can’t just wave away. If I were her I would definitely still have some issues about that. The rest of the characters aren’t all that memorable outside of the President. He’s about as antagonistic as you can get without being a downright villain. He only cares about himself and getting rich. At least he’s pretty honest and direct about this.

So what about the monsters? Well, I’d say the best way to think of them is Godzilla if he were part bird. They have the classic Atomic Breath and I would make the case that their design is rather similar as well. They just have more of an aerial base than the King of the Monsters. They also look pretty impressive as none of the government weapons is really able to do much against them. They won’t go as high tier as most of the G monsters simply due to a lack of opposition. It’s not like they had to deal with the same armaments that Godzilla has endured over the years. They’ll definitely be remembered though.

The main Gappa is still pretty young so he doesn’t get to do as much. If this film ever gets a sequel then I’m sure he’ll go around dishing out the pain to the humans. The film’s ending is pretty happy when you think about it so things end off on the right foot. The film’s only real weakness as I mentioned is that it can be a bit slow. The pacing isn’t amazing but you don’t always expect that here anyway. Kaiju films are typically meant to be slow burners. The first half is rather standard but then once the Kaiju shows up things then things get interesting. The film definitely doesn’t try to make any waves here and just goes through the motions. It does everything you would expect it to and that’s why I’d say it’s pretty standard.

Overall, If you like monster films then you should definitely check out this one. You can never have too many creature features right? I wonder if anyone still remembers Gappa at this point. Also, how come every big monster likes to start with a G? Godzilla, Gamera, Ghidorah, Gyaos, Gabera, Gigan, Gappa, etc. I guess that’s just how it goes. It does make for a pretty solid starting letter I would say. You’re going to have a really hard time rooting for the humans at all though. If anything I wouldn’t be surprised if you’re actively rooting against them. This is one of those films where the monsters are portrayed as the absolute heroes through and through. The body count is probably still pretty high when you think about it though so if you see these monsters it’s still good to get out of there as soon as possible.