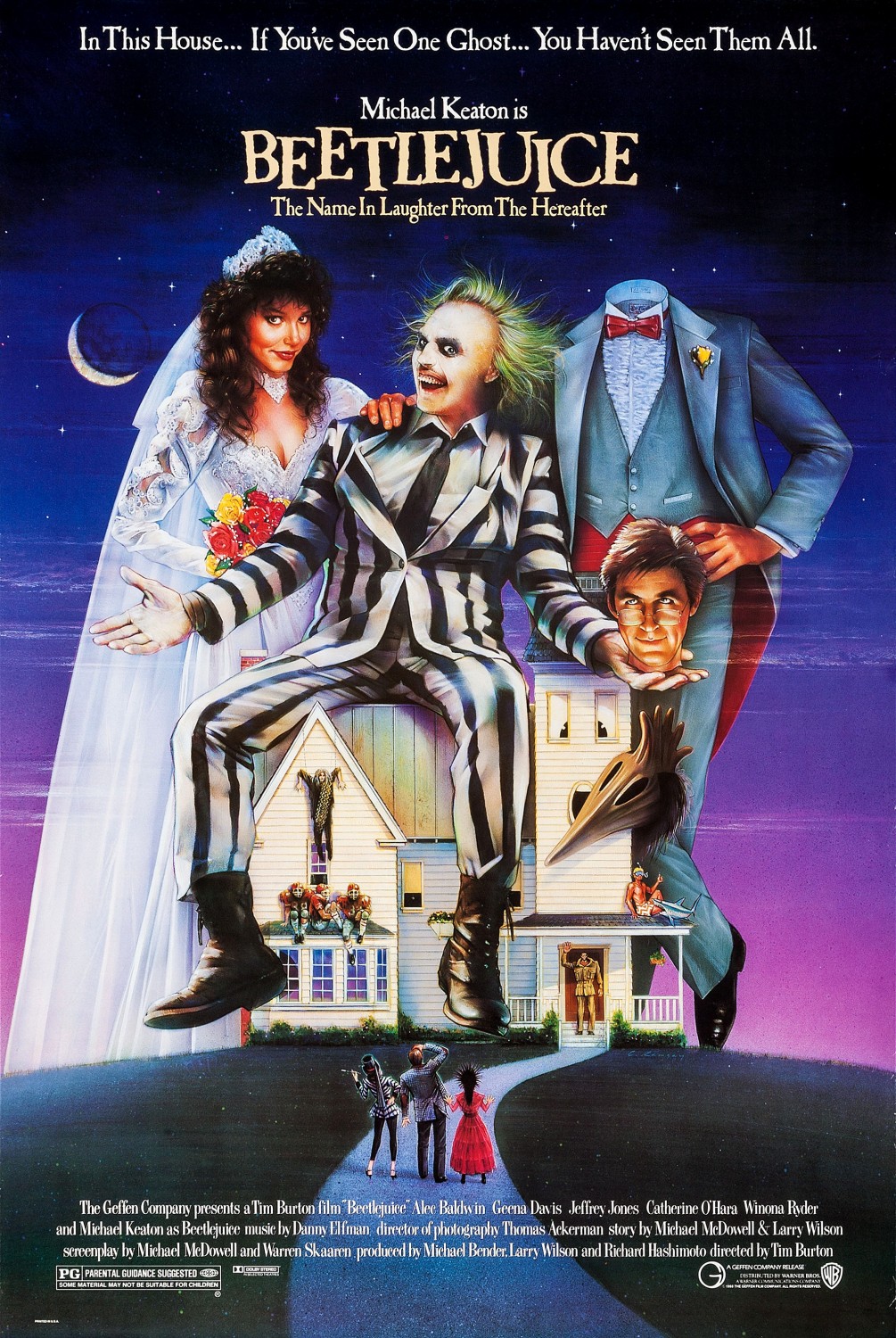 Beetlejuice is definitely a very popular horror film so you’re bound to have run across it at some point or another. The theater play certainly ran for a while as well. It’s a pretty interesting story and it can be a fun blend of humor and supernatural like Ghostbusters or something like that. Unfortunately it is held back by the main villain Betelgeuse who just isn’t able to hold the film here. His screen time actually isn’t all that long which is good but he still tries to drag down the scenes that he is in.

The movie starts with Adam and Barbara settling into their new house. Unfortunately they end up dying in a car accident. They are now ghosts who are stuck inside their own house and cannot leave. They are now forced to watch a new family show up to live there. They need a way to chase these people out so the house will remain theirs but their various scare tactics aren’t working. There is one person who can help, a ghost known as Betelgeuse. However the guy has a rather shady reputation and all the experts are telling the leads not to summon him. Should they listen?

The main characters aren’t the greatest leads so it’s good that we got the next family to come in. Adam is way too passive the whole time and just lets everything go on around him. The first thing Betelgeuse does when he shows up is attack Barbara and Adam literally does nothing about it. I think I may have heard him utter a half hearted “hey” when he did it but that was it. He certainly means well but at the end of the day he just doesn’t do much. He looks really bad in the final scenes of the film as well. Seriously you’d think the guy would have been able to do more. Barbara is a little better. She still isn’t very active at times but at least she’s a bit tougher than Adam. I feel like she also should have been against summoning Betelgeuse after the initial scene though.

No, the real characters show up when Charles and Delia along with their daughter Lydia appear. This family is ready to have a swell time in the new place. From all of the characters Charles is definitely putting in the most effort in order to relax. He’s a glass half full kind of guy where nothing can really keep him down. He’s just got a nice way of spinning everything into a positive around here. It’s part of why the ghosts can’t really mess with him. You can’t mess with a guy who’s having a lot of fun right? Then you have Delia who’s a bit more eccentric and certainly very particular about interior design. She’s eager to have the ghosts around later on even though she was super skeptical beforehand.

Lydia isn’t quite as fun as her parents. She’s going through that goth phase where she is pretty depressed all of the time and even writes a foreboding letter at one point in the film. The characters definitely need to keep a very close eye on her that’s for sure. The family also has a friend/uncle named Otho who’s a lot of fun. That guy has some pretty solid tricks at his disposal. He was easily able to take down the two nearest ghosts which is impressive and in general he doesn’t scare easily. So we’ve got a pretty strong cast here. It would help if Betelgeuse was better but it just wasn’t meant to be. You can tell what kind of character portrayal they’re going for here but instead of funny he just came across as annoying instead.

One of the best scenes in the film helped to highlight how solid most of the cast was though. There’s a scene where the ghosts force the characters to dance to a crazy song for a while. Instead of running away they’re all pretty pleased with themselves for being able to keep up with the choreography. I thought this scene was handled really well with the humor and is an example of a moment that was written very well. The movie definitely had some fun lines here and there as well but this was the standout moment. As you would expect the film goes all in with some of the creepy visuals here and there. The scenes of Adam and Barbara destroying themselves to show the new tenants how scary they were was definitely something else that’s for sure.

Beetlejuice has a good blend of humor going for the most part but it’s movie where the flaws definitely do show more than in others. It’s hard to really put this one above the breakeven point as a result. One thing I would have done to take this to the next level would either have been more scenes of the new family hanging out since they were a lot of fun or maybe exploring the fantasy land outside. Those giant worms were pretty impressive and it raises a lot of questions about what the world of death is really like. I guess every ghost is sorta trapped in their domain aside from visiting the spirit world? I’d also question how much a spirit can influence. On one hand they seem to be able to interact with objects but not directly with people. Of course Betelgeuse can, but I suppose he’s a unique case. Maybe it’s one of those things where you have to build up your power.

Overall, Beetlejuice is definitely a classic. I don’t think it’s aged as well as some of the all stars like Ghostbusters or Men in Black but I can see why a lot of people find this to be a pretty fun watch. There’s a lot going on and the movie tends to move at a quick pace. Throw in some fun visuals like the outside world and you’ve got enough elements to keep you interested. I’d also say that there’s definitely a whole lot you could do for a sequel as well. I feel like this movie is primed for a sequel at some point. By now it’s definitely old enough for the nostalgia to work. Halloween may be over but if you want one last trip down memory lane then this could be a good one to check out.