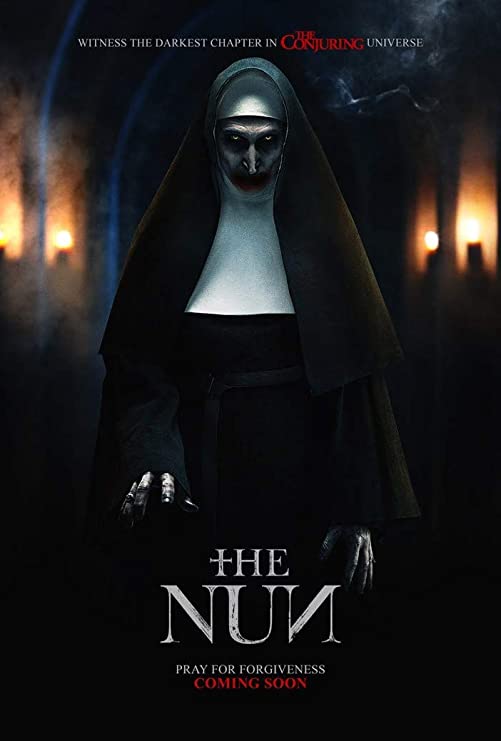 I definitely remember this film making the rounds when it came out. After all there’s definitely a novelty to having a film about an evil Nun. Of course the villain isn’t literally a Nun but that’s what the imagery is going for. This one plays out a lot more like a classic horror film than the other installments in the Conjuring franchise. I wouldn’t give this one a thumbs up but I will say that it definitely ends up being one of the most intense installments. Get ready for a creepy trip through their Church.

The movie starts with two Nuns unsealing a door and taking something away from it. This turned out to be a critical mistake as a demon destroys one and the other Nun destroys herself. The poor delivery guy Frenchie comes across the body and lets the town know. This news makes it all the way to the Vatican where the higher ups instruct Burke to go and check it out. They tell him to bring along trainee Irene for this quest. She has not yet taken her vows and wonders if she can really be of help. Still, one simply does not refuse an order from the Vatican so they head to the manor. The place feels quite ominous and the townsfolk are too afraid to even go near the place. Burke and Irene prepare to spend the night over there but surviving to the dawn may prove to be trickier than they thought.

While this may seem like a minor element, I really liked the backdrop of the film. The Church made for a very interesting layout and reminded me a lot of the first Resident Evil film. It’s a great location that’s quite atmospheric and since the Church is rather dark from the start there are plenty of areas for jump scares. Be prepared to see a whole onslaught of them with the demon peeking around every corner. The opening scene of the shady Nun talking to the heroes and then revealing her true form to Irene was pretty fun. The whole adventure is really a setup from the villain after all so she did a good job of setting that up.

Now, I do have to question the Nun (Gonna just call the demon “The Nun” so there’s no spoilers here) in what her real plan was though. It seems like there is just enough holy energy here to prevent her from leaving the premises or doing anything drastic. That’s good I suppose, but at the same time she can clearly destroy everyone in the castle at any time. Is there really a point to toying with them? She probably could have broken the seals and escaped already if she were really trying. Perhaps she has stopped because even without the Nuns she wouldn’t be able to escape. Were the two Nuns from the opening scene the final ones and the rest were dead from the jump or were they all only murdered while Irene closed her eyes leading to the fake out?

The film leaves some things up to interpretation which is nice but I do feel like a little more detail on what the Nun was thinking would be nice. Most of these vengeful demons and spirits just want revenge but put it pretty plainly to the heroes. Others just don’t want you watching their DVD so if you put it in then that’s game over. The Nun was definitely a fun villain though. If you take away the plot armor of the heroes then they were completely outmatched. Probably should have destroyed Burke while he was buried or pushed Irene in as well tbh and that would have ended the movie in an instant.

Usually in horror films you don’t get to have the explosive moment where the hero arrives in the nick of time but this one actually managed to include that in which was pretty neat. Frenchie comes in handy and the fact that he has a gun at the ready was pretty wise. The Nun feels like it actually has an action packed climax which is pretty interesting. The way the Nun is taken on gets a little on the gross side by the end but I suppose that’s what happens when you lower your guard. Getting overconfident has taken down a whole lot of villains over the years.

Frenchie would have to be the most interesting character but in this case all 3 of the main characters were solid. Irene may have been taken by surprise at everything going on but she was quickly able to gather her bearings and contribute a whole lot here. She’s a lot more proactive compared to many horror leads and is also pretty fearless. You have to have a lot of guts to keep on fighting against these demons or walk around the place at night when any wrong step can lead to your doom. Burke is not quite as bold and falls for every single one of the mind games though. Seriously the demon has a field day with him. He has a tragic origin story of course which allows the Nun to get a foothold there. He seems reasonably skilled at least and did bring some holy weapons. Whether they work or not tends to vary on film to film but they can usually at least stall for time. Given Burke’s high rank though I would have liked for his abilities to have been a little more impressive. Show us something he can do that the average person cannot. That would have been pretty neat.

The Nun naturally ends up being ultra powerful to the point where the chants and usual techniques don’t really work. Only the ultimate weapon is able to do anything here. These demons sure do tend to be quite strong, it makes you wonder how the characters would deal with them originally. We get a flashback where the army was called in but I can only assume that their abilities worked because the Nun was a lot weaker back then or because they were just stronger at the time. Either way I suppose the whole war through a wrench into the eternal banishment thing. It’s why whenever possible you need to finish these demons off rather than capturing them. Otherwise they start making zombies and the whole situation becomes even more unwinnable as time goes on.

Overall, The Nun is not really trying to be a very unique experience this time around. It’s really more about the classic jump scares as the heroes try to survive in the haunted Church. It’s definitely got a whole lot of action and a lot of fun visuals. On the other hand it can get pretty gruesome with the Nun shredding through everyone. I wasn’t a fan of how the Nun got taken down in the end, but she was a much better villain than a lot of the recent ones I’ve seen. If you’re up for a pretty intense horror film then the Nun should be right up your alley. If you’re looking for more of an atmospheric horror then you’re better off checking Annabelle instead.