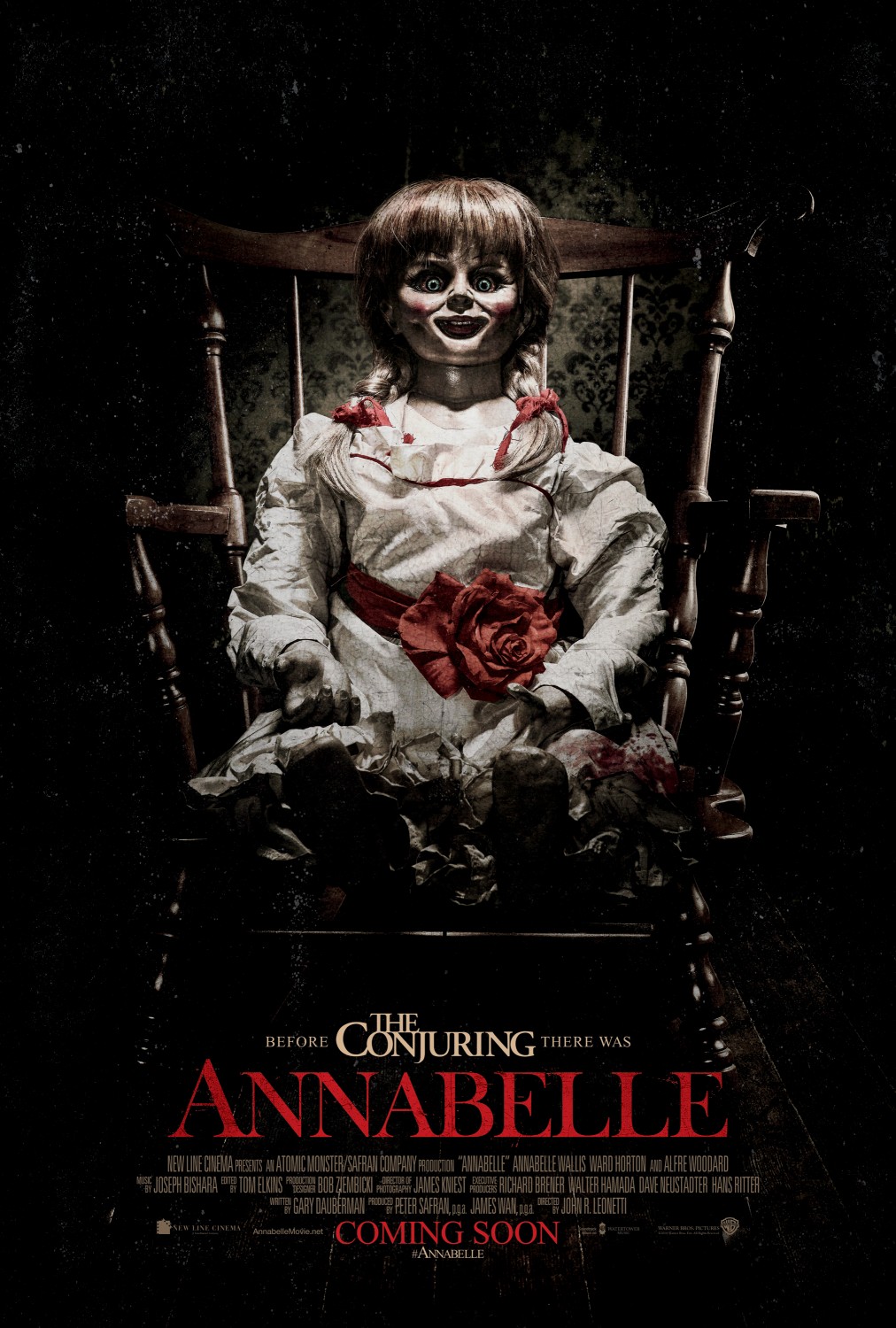 The Conjuring verse has definitely gotten pretty big at this point. With the main titles plus two different spinoff series I dare say that it’s easily the biggest horror universe in cinema. It may not have as many installments as some others but I’d like to see any other one have two spinoffs. Then maybe we could have a time travel story at some point that brings them all together at once at their peak and maybe even bring some of the human characters from all of the films along. This one’s pretty solid for a horror film. I wouldn’t say that it’s without fault but I wouldn’t call it a bad movie either.

The movie starts with Mia and John getting ready to finally have a kid. John has the bright idea to give Mia a doll that looks like it was run over several times as a gift. She likes it so I guess maybe this is just the style she’s into but I dunno, I get bad vibes from it right away. That night they are attacked by a bunch of lunatics and Mia ends up getting stabbed. Fortunately they all live including the baby. Now the three of them should be okay but Mia keeps seeing ghosts like the evil lady showing up or Annabelle herself giving her the evil eye. Is Mia going crazy or does the doll actually want to take her down?

The first scene with the home invaders caught me off guard because I was so sure that they were apparitions and weren’t really there. I mean that’s just horror 101 that the heroine thinks she sees something but it’s all fake right? The fact that they were actually here was pretty interesting. It also made for an intense fight scene as John had to try and take both of them down on his own. He handled himself pretty well until the cops were able to show up and fortunately put an end to things. It definitely helped to establish the world as being a pretty dangerous one and also showed us why Mia would be on edge for the rest of the film. She just can’t feel safe anywhere.

It doesn’t help that Annabelle is causing a lot of mischief. She turns the toaster on by itself, loves to turn on music over and over again, and doing other things like that. She rarely ever moves to do anything on her own though. She likes to scare Mia but never presses the issue more than that. In fact when going on the offensive she seems to prefer to summon a ghost of an older lady or even uses a kid form to take names. Seeing her try to fight as a doll would have been a little more entertaining but I guess she didn’t want to chance it. Like the Nun she is technically a demon inhabiting the doll or using it as a medium but I guess she has freedom to do other things as well.

She’s at least strong enough to mess with Perez even when he’s literally in front of the Church and has his full gear on. He definitely should not have looked back though. Why even look back when you could do a Football dive into the Church and be safe? That’s definitely what he should have done if you ask me and then he would have been in good shape. At least he wanted to help the heroes though so I’ll give him props for the attempt. He was definitely a nice guy. Then you have Evelyn who also did her best to help the main characters out. She may have been a little out of her league with these supernatural forces but who isn’t right? At least this way Mia had some support.

John made for a good supporting character here. He was supportive of Mia the whole time and really did everything he could to help her out in the end. Taking the night shift was a bit dicey but I suppose there’s not a whole lot he could have done to stay home. If anything losing his job would probably make things worse for both of them. In the end he also helps prevent her from making the ultimate mistake which would have been really unfortunate. Mia does her best to stay sane the whole time and escape Annabelle’s attacks but they do start to get her on the edge. The most intense trial she probably had to go through here was heading to the basement. The elevator definitely was not in her favor but it makes sense. If anything I feel like it should happen more often in horror films. I don’t know about the elevators they use here but if you’re being chased by someone and jump into an elevator the odds of it shutting instantly are slim to none. At my elevator at least if you click to go up or down it’ll open up the elevator right away before you can move to a new floor. It always has top priority.

Mia does her best to look into the whole Annabelle situation but ultimately it’s one of those things where there isn’t a whole lot to dig up. There isn’t a way out and she’s basically unbeatable. When you think about it that’s the moral of the story. I can’t say that the ending was particularly satisfying either. We don’t really get a twist ending so instead Annabelle gets a lot of props in the normal one. My real issue here is that one of the characters basically plays Annabelle’s game thinking that this will balance the scales but it has no real effect. Perhaps at most it slows Annabelle down but based on the grin at the end and everything it’s definitely not something that will be a permanent win. Thing is, you can’t trust demons so why even play their games in the first place? Annabelle certainly isn’t one of the stronger demons but she is still a demon nonetheless.

Overall, Annabelle is definitely more of an atmospheric kind of horror title. The demon isn’t going around murdering everyone for the most part. Usually she just causes a lot of dangerous pranks and tries to mess with Mia’s psyche. I’m glad that the film actually incorporated this into the plot though. There are a few deaths but really not all that much when you think about it and close to half the body count here was unrelated to Annabelle herself. I didn’t care for the ending which was a bit sour but I wouldn’t say this film was bad. It didn’t rely on much or any shock value which was pretty nice. We didn’t have to hear some super long and tragic origin story either. Annabelle is just a crazy demon that wants your soul and doesn’t need much more of a background than that. The crazy murderers from the origin got a bit of an origin story which I thought was pretty pointless but I suppose it tied into Annabelle’s origin so we needed it to an extent. I wouldn’t call this film super strong but it’s a decent horror film if you want to check out out. I would sooner recommend Ghostbusters though.