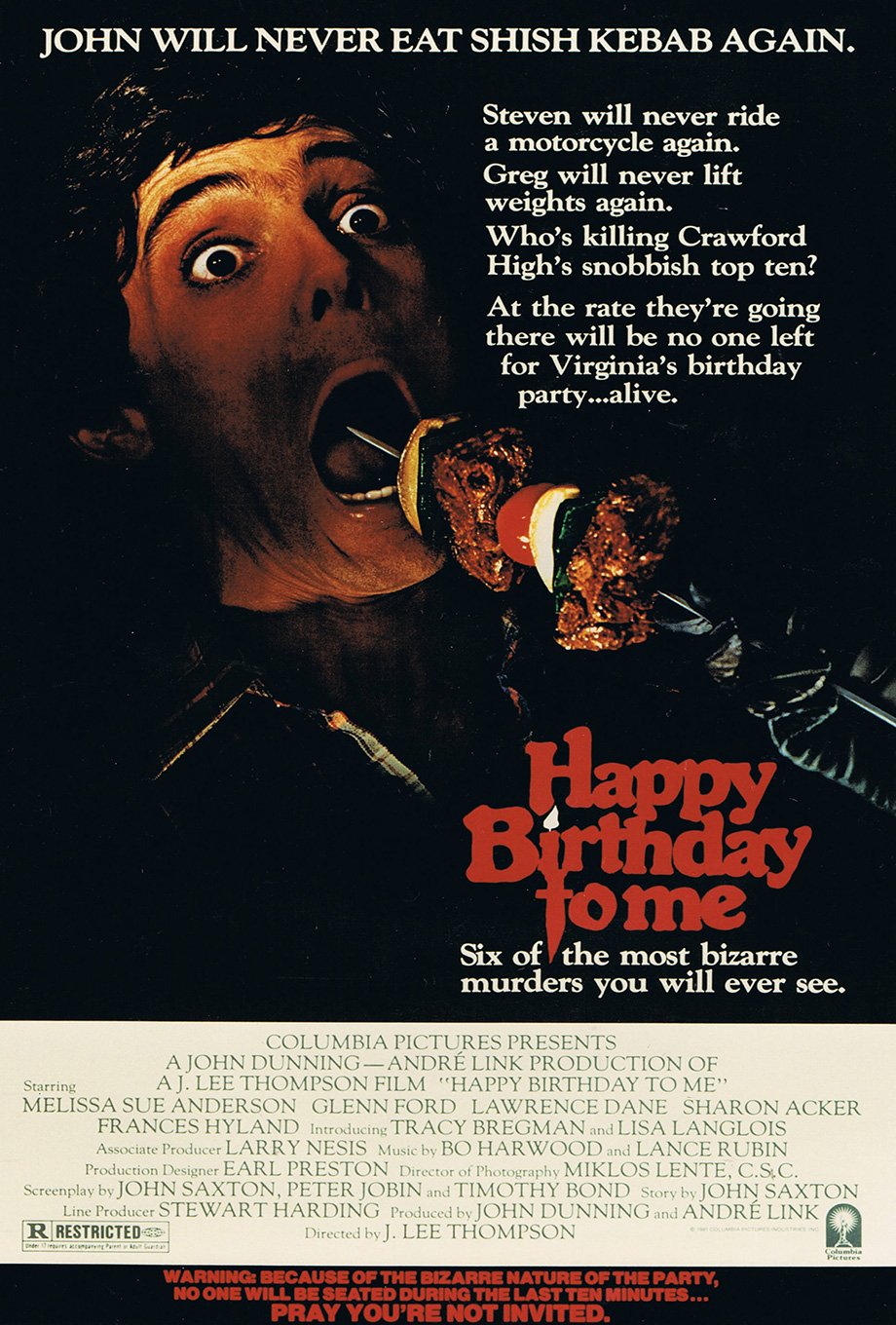 This movie definitely has one of the more disturbing posters you’re likely to see around that’s for sure. Right away you can probably tell that this film is not going to end well and you’d be right. It’s your classic slasher title as the villain takes everyone out one by one. The main draw here is figuring out who the murderer is as there are plenty of suspects. All of these guys feel like people who may be guilty so no character is innocent here. We’ll see if you can figure out who did it.

So the movie starts by introducing us to a nice little town. In this town there’s a school with the Big 10, the students who are destined for greatness. Some of them got this status through money…well just about all of them to be honest and a few with good ole fashioned hard work. They like to mess with people as a clique by harassing people and showing a general disregard for public safety. Someone clearly doesn’t like this because members of the Big 10 keep getting murdered one after another. Some of them start suspecting foul play while others treat it all like an elaborate joke. There’s a whole lot of plot convenience here as well I should add.

The main character here is Ginny. She’s a member of the group but is fairly new to the town and is still getting used to being a rebellious person. She has just recovered from a traumatic event involving the death of her Mother but is finally ready for society again. Unfortunately these murders are having a pretty bad effect on her psyche. In fact, Ginny believes that she may be the one doing these murders but can’t find a way to prove it. The whole thing is driving her insane and her “friends” only seem to care about how they can use this momentary weakness to get together with her as a rebound. With nobody to turn to and her father away on another business trip Ginny is definitely in a pretty bad spot here.

One of the big problems with the film is just how unlikable everyone is. Part of this is the film going out of its way to make everyone suspicious but because of that there is nobody to root for. One of the big 10 for example has a creepy fascination with wax modes as he even creates some based on the girl who just went missing and did it in a violent fashion. Not exactly the kind of guy you want as a friend right? Another guy is a player who gets together with everyone all the time. Everyone is constantly trying to manipulate the others or just hooking up with everyone one after another. Ginny isn’t exactly removed from that either and doesn’t look much better. These are all deeply flawed characters to the point where none of them are even remotely likable. It’s just unfortunate.

Ginny also doesn’t put herself in a great position to try and keep some distance from the murders. She keeps on meeting up with different guys by herself. Not exactly the best plan. Of course it’s not hard since all the guys seem to like her but she should be the one avoiding these scenarios. It’s one of those films where you feel like it may not have made a difference to be honest but it still would have been nice to see her trying. Even the scene where she runs into the graveyard by herself is kind of suspect. Why distance yourself from the group like that when it’s so late at night? The fact that she lives in the middle of the forest is also pretty crazy. I suppose it’s one of those things where it probably looks better when you’re not watching a horror film but it doesn’t help here.

It goes without saying that the movie is definitely very violent. Each of the characters are murdered in very violent ways. Nobody gets what you’d call a simple death here, they all have to really go through the wringer so you can tell that the murderer really doesn’t like these guys either. They just can’t catch a break. It does raise some questions later on when you actually know what’s going on though. It also reminds you why you need to keep your guard up at times. In the very first murder, I don’t care who it is but you were just being choked by someone with black gloves and then someone with the same pair appears to help you…..suspicious right? This character didn’t think so until it was too late unfortunately. Not every murder was careless like that but another one involving weights was pretty suspect. This character is literally not saying a word the entire time you’re talking. Isn’t that kind of odd?

So of course the writing is going for the classic moments like this. I’d have to give it a thumbs down though in large part to how bad the cast was. I think you can definitely try to make this kind of film without making the characters that unlikable. It was a bit excessive at times. The only good characters were some of the supporting characters like the headmaster. At least she was trying to get a handle on things and keep people out of trouble. She may not have been very successful but at least she tried.

The movie’s big reveal at the end will either be a genius move for you or you’ll roll your eyes. As I said, there are a lot of plot conveniences for this to work that’s for sure. The actual reveal I’m cool with because it’s a lot more interesting than the other routes but you do feel like the writing doesn’t hold up. One character looks pretty terrible the whole time though as he just panics and doesn’t do anything the whole time until it’s too late. It’s too bad because in the present he seemed good even if the flashbacks got tricky. Ultimately at least you don’t get the feeling that he was a bad person, it’s just that things would come up suddenly. The villain just took things way too intensely and ultimately there’s no excuse there. Villains will be villains I suppose.

Overall, I definitely wouldn’t recommend this. Happy Birthday to Me is really just your classic teen slasher. If I had to compare it to a film it’s probably most like I Know What You Did Last Summer in terms of how bad the main cast is. Whenever you have a film with no likable characters you know that things are not going to end well. You need some good characters or your film’s going to fall through just like this one did. No amount of shock value is really going to help to cover that up. As soon as members of the Big 10 were all getting bumped off though I would have moved away if I were the rest of the kids. We’ve already established that they’re rich so that’s the best thing to do. Just jet out of there! I’d also ask for Police Protection, the last thing I’ll do is head to the graveyard by myself again in the dead of night…..