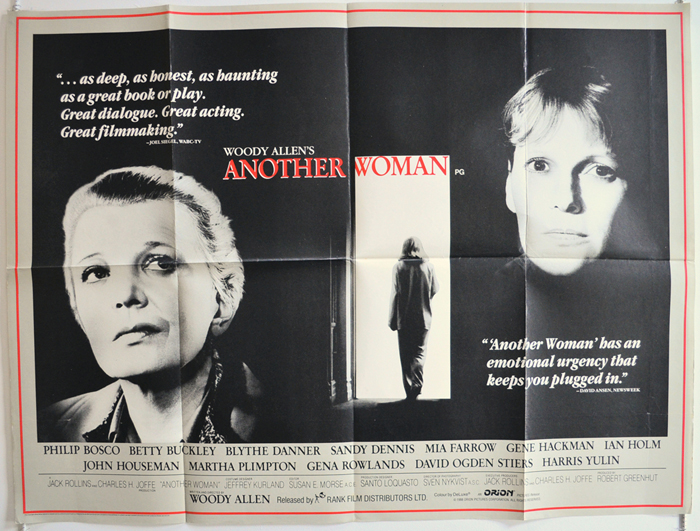 Time for another Woody Allen film where unsurprisingly the writing is one of the weakest aspects here. The film has a decent premise I guess but one that the film drags on as long as possible. The longer the movie goes, the weaker it gets and that’s the problem. I didn’t actually think it was all that bad at first but we gradually got more and more drama with each character sinking further and further. By the end of the film there are no characters to root for and you’ll wonder what the point of the whole thing was.

The movie starts out by introducing us to Marion. She is a lady who has achieved great success academically and is happily married. One day though she begins to eavesdrop on a counseling session being held next door and realizes that maybe her life is rather empty. She never noticed it before but the grass just seems greener on the other side. It turns out that Marion’s friends don’t like her as much as she thought they did and her marriage also seems rather lifeless now. She begins to reminisce about the good ole days and wonders if she should be taking a different path for her future. Is this all on the level or is she just taking herself down a dangerous path?

One thing about life is that you’ve always got to take the path of no regrets. Have fun while you’re young. You can still have fun once you’re older of course but why wait until then? If you put all of your dreams on hold in the present with the idea that you’ll do them all someday, then you may end up feeling like you have missed out somewhere along the way. That’s what happens to Marion here but the thing is that she has nobody to blame but herself. We learn in the film that she can be quite judgmental at times. She is very quick to point the finger at others or overthink things. Then you’ve got the fact that she had an affair with someone who was already married. In fact, she got him to divorce his current wife and marry her.

That’s not some slight inconvenience like taking the last can of pasta at the supermarket. She just wrecked an entire relationship for her own gain without a single doubt. At least she did not accept the advances of another married man who wanted to be with her but it’s hard to give her much credit at this point. When she learns that her husband is cheating on her as well it’s also hard to feel as bad for her. If you gain someone by cheating then you already know that your partner isn’t the trustworthy type. There’s no reason to believe that you’ll be the exception and that nobody would dare cheat on you.

Marion is definitely a very flawed character here which is part of the point of her character arc but it’s definitely not in even remotely an interesting way. She feels more like a villain than a protagonist most of the time. Her supporting cast are all just as suspect though. First you’ve got her husband Ken who loves hanging out at parties and having a good time but isn’t really the trust worthy type. He’s very much a man of habit who just goes through the motions of life. He does whatever gives him the most pleasure and doesn’t care about the rest. Then you’ve got Larry who has no problems trying to get together with someone who’s already married. The film tries to get you to think that she would have had a better life with him and perhaps that would be the case but she was already married during these advances so there’s no way that getting together with him would have been the “right” move at that point. She had already boxed herself in with a pretty bad set of choices.

As mentioned though, the writing is just really bad. Pretty much all of the characters are as crude as can be. The dialogue is all pretty crazy most of the time but not in a cool surreal way. Just in a boring sense where everyone just seems to care about talking on matters relating to relationships, scandals, and cheating. It’s rare to find any conversation in the film that is actually upbeat and interesting. All of the characters just feel really bad for themselves the whole time. It’s easy to see why none of them are happy. You’ve got to make the best with what you’ve got in order to be really content. Constantly comparing yourself to everyone else is a surefire way to do the absolute opposite.

If I had to name one decent scene I suppose it would be the trippy dream where everything turns into a stage play and Marion learns that her father is one of the people seeing the counselor next door. She also finds out that she is responsible for her first husband destroying himself. Did I mention that she had a first husband? Marion moves very quickly and rebounded from the guy with someone else shortly afterwards. Just in case you thought we didn’t already have too many romance plots going around. He died off screen prior to the film starting but this extra detail was clearly just added for kicks to show that the cycle keeps going on. I wouldn’t be surprised if he was already married before she met him just like the other affairs in the film.

Overall, Another Woman is an appropriate title here as nobody in the film seems content with the person they already have. You can also look at it in another way as there’s always another woman blaming Marion for their troubles. You’ve got the “best friend” who gets drunk all the time and blames Marion for a relationship that never actually happened. You have the Ex who blamed Marion for stealing her husband which is actually true but if he could be stolen so easily then he clearly wasn’t worth anything from the start. Etc. There’s a whole lot of the blame game going on around here with a ton of twisted relationships. Nobody trusts each other here and for good reason but it also means that none of these relationships would have stood much of a chance if you ask me. Either way something would have come along to mess things up for them. I would definitely recommend watching just about anything else instead of this film. If you want a good drama title then watch To Each His Own instead for a much higher standard of quality.