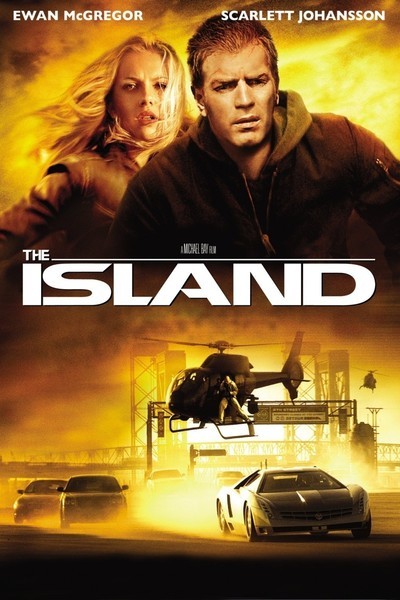 With a title like the Island you may be guessing that this is some kind of slice of life film or maybe even a romance film. Well, this one’s a little different from that. This one’s a thriller and deals with some pretty interesting themes. I wouldn’t say it lives up to its full potential but ends up being a pretty entertaining film I’d say. A lot happens here for sure and I like the general premise once you start getting into the twists.

The movie starts by introducing us to Lincoln who is the main character. He has grown up on an island where things are pretty strict. You’re not allowed to really go close to anyone or you’ll trigger proximity alerts to the authorities. Nobody is allowed off of the island because the rest of the world is completely poisoned after some kind of nuclear attack. Occasionally the authorities will find more survivors outside and bring them onto the island. Lincoln finds the whole thing to be pretty empty. He just feels like life isn’t fulfilling and has so many questions about why they have to be stuck on this island. Nobody is interested in really giving him any answers though. In fact, people aren’t even allowed to do so or they’ll be in trouble. Well, Lincoln is determined to find answers no matter what it takes.

The whole idea of the island will likely have you feeling a strong sense of skepticism. Has there ever been a chance where this actually was the truth in a film? The instant you find out that nobody is allowed to answer any questions you’ll know that something clearly isn’t right here. Then you’ve got the people who “win” the lottery and get to leave the island to another one on the outside world. Let me back up a bit, the title is referring to the island you make it to for winning the lottery. The home base is technically called something else but you’re living underground in case you were getting mixed up by all the island talk. Basically this is the only way to get back outside so people are always thrilled to get out there. It’s very suspect of course and lets just say that things don’t go well for the people who win.

The movie goes into a lot of other plot lines from there and it does all feel like a big adventure. Due to how the society is set up the main characters don’t know a whole lot though. They are intentionally kept in an environment like kids with not a whole lot of experience outside of their immediate environment. So in some ways they all act a bit like kids even though they’re technically older. The cast isn’t all that big as most of the focus is on Lincoln and Jordan. They are decent main characters although the romance seems to happen awful fast. This is definitely one of those films where I wouldn’t exactly give the romance a thumbs up. Feels like it’s more one of those things that has to happen but didn’t really need to.

Lincoln is very inquisitive about everything that’s going on which is good. Most of the characters are content to just wait and see what happens here so he’s got a leg up there. He’s good at rolling with the situation and adapting well. He looks good throughout the second half of the film and really makes a lot of the right decisions. Meanwhile Jordan is also solid and I like her competitive spirit. She is quite ready to jump into action. She may not have suspected what was going on the same way Lincoln did but she was quick to join his side.

Albert is one of the villains in the film and he definitely does a good job in his role. The guy is a dangerous opponent that you really don’t want to go up against. He’s got a plan for everything and clearly has a lot of experience. He’s the standout character of the movie. Then you’ve got Merrick who is a pretty solid character as well. He has a big role in the film and is pretty smart so he’s always got a lot of ideas as well. Merrick tends to notice things that nobody else does and that’s why he gets the big bucks. Meanwhile Lincoln also has a few friends who pop in every now and again. They’re pretty decent but none of them get a whole lot to do.

If there’s anything holding this film back I suppose it would be that at times the plot can move a bit slowly. Until you get to the main plot twists the characters spend a whole lot of time just at the base not really doing anything. I’m thinking the purpose here is to show just how repetitive life can be while at the base. Still, I think it could have been sped up a bit as well. Once we enter the second half of the movie and get a different backdrop then it really allows for a lot of new circumstances. Some people definitely look really bad for not figuring out that something was up though.

I don’t blame any of the people in the base because there’s no real way for them to have figured anything out but the other people separate from the project? I don’t see how none of them were able to find out about this. The film hints of course that most of these people would rather not know so they don’t search too hard but I’m still not quite able to buy that. Certainly not an operation this big, I don’t care quite how in the middle of nowhere it is located. Additionally, you’d think there would be more guards on the outskirts to stop people from getting away. I guess when you have bounty hunters at the ready though there is less pressure.

Overall, The Island is a good film. I think it could have been better especially with the great plots it has at the ready but it did well enough where I could recommend it. The writing’s decent and the main characters were good. It’s an ambitious title and has a solid climax. The less you know about the film the more you can have fun piecing together the different twists coming up since at the very least from the beginning you’ll definitely know that something isn’t quite adding up here. Of course the true twist would be if a film has this premise but actually plays it straight where the world is covered in radiation. When the main characters bust out they realize this and the film ends on that somber note. It would be extremely unexpected but a really interesting way to play around with the audience expectations.