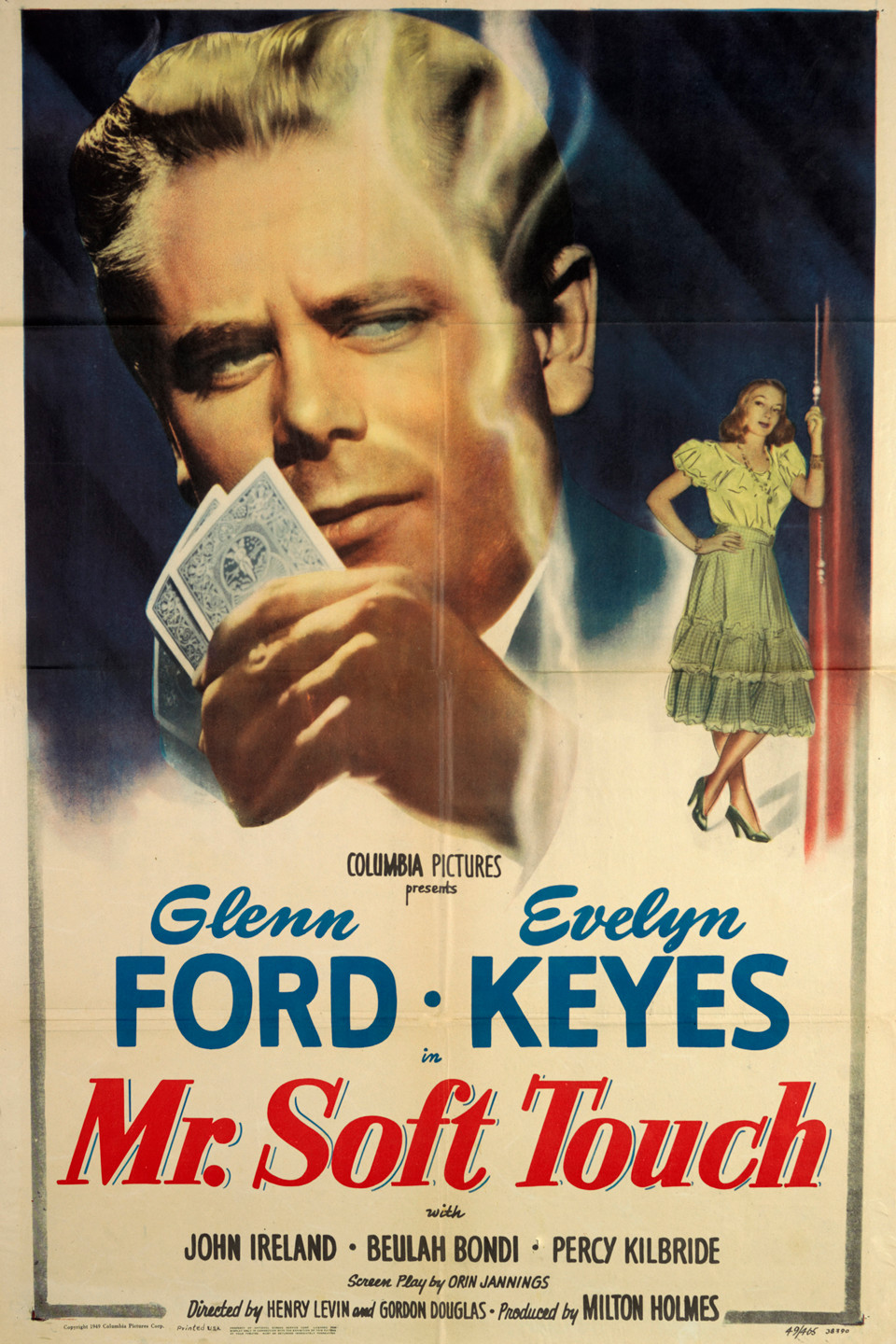 Mr. Soft Touch is a film about a guy deciding to get revenge on some gangsters for taking over his shop. It’s a different spin than usual though as he just wants his money back and isn’t going around shooting them all down. While the film has some pretty good writing humor, I ultimately wouldn’t give it a thumbs up because of some suspect characters and the main character just not being all that likable even by the end.

The movie starts by introducing us to Joe. He has stolen a ton of money and is trying to escape the country but unfortunately his friends were unable to find a boat that leaves before Christmas. He needs to survive for a night somewhere but that won’t be easy since the Mob is everywhere. Joe is able to masquerade as a criminal and get taken to a settlement home where a social worker named Jenny will look after him. Joe figures this will be a decent safehouse as a last resort since there is literally no alternative but when he sees how much help these people need, will he really be able to leave? Some tough choices will have to be made.

Soft Touch has some fun moments and good bits of humor throughout. One nice moment was when the tough guys at the home try to scam Joe out of some money with the dice. He takes them down and clearly has some kind of experience with these games from a while back. He knows a scam when he sees one but does a good job of playing dumb the whole time. This lets him claim the upper hand. It was a nice subversion where usually the main character would have gotten suckered. The main tough guy also reminded me a lot of Spider-Man from the recent movies so it was interesting to see him in more of a villainous role.

You can tell that the people at tis place all meant well. It was a nice cast of characters here. At first they weren’t all happy to see Joe and it was hard to blame them since he wasn’t playing ball but eventually they all formed a pretty good group. In particular I liked Rickle. He had a tendency to go off on long rants about everything but that’s the kind of character who is always good to add levity to the equation. It’ll help keep everyone’s spirits up there which is really important.

Then you have Jenny who is a solid heroine. She does a whole lot for her community and really tried to help Joe out when she thought he was someone else. I would make the case that she is far too lenient though. Her job is about mercy and it’s an important function but since the guy who was charged was an abusive drunk then it seems like he was already too far gone for any of this to help. Jenny also had a traumatic backstory as a kid which makes it all the more impressive that she is putting herself out on the front lines and helping out a bit. She may be a little extreme but I would definitely say that she is a good person.

Then we get to Joe. I just couldn’t find myself being able to root for him. I understand him taking the money back after the mobsters stole it. That makes perfect sense since it was his and the whole thing seems unfair. Why does he not help Clara get away from Victor though? That seems like a pretty toxic relationship that he just looks the other way with. The film would have been a lot better without those two characters since they just hurt Joe a whole lot by extension. Then you’ve got the fact that Joe doesn’t do anything to help out the people in the settlement house before it’s too late. Byrd offered him a rather decent deal at the time but Joe wouldn’t hear of it.

Joe tries to make things right by the end but it is far too late for that. Even the scene where he gives his jacket and the money to the little girl comes off as rather suspect. At first it seems like a nice gesture but then Jenny points out that it was also a way to take the risk off and it’s hard to see it any other way at that point. The girl’s life was in serious jeopardy with the mobsters finding that kind of cash on her. Joe just puts too many people in harm’s way. He has some good plans but they all end up putting people in more danger while he escapes. It’s not a very heroic approach at all.

As for Byrd, I thought he was a pretty solid reporter. The guy put the pieces together a lot quicker than you would have initially expected. He clearly has some bad history with Joe but the guy did make a good offer to call the cops in. He just wanted some intel. I wasn’t really sure why Joe wouldn’t tell him at this point since his partner is dead and the mobsters are everywhere. Maybe it was a pride thing or just because Byrd was partially responsible for his partner dying since he didn’t do anything. Byrd did save Joe’s life a few scenes earlier though which is hard to forget. Byrd surprisingly doesn’t take this all that personal later on when they meet up again.

At times the movie seems to move really fast with characters sort of going through a character arc off screen. One example is the romance between Jenny and Joe. It goes from nowhere to suddenly she’s begging him to stay and some of the big speeches you would expect if they had been together for a long time. It doesn’t always flow as organically as you would expect. I suppose the film just wanted to move straight on ahead to the next moment but some scenes would just happen really suddenly like that.

Overall, Mr. Soft Touch would have been better with a better main character. Someone who was actually standing up for justice to stop the mobsters, not just because they crossed him. I would have liked better reasons for why he didn’t accept Byrd’s help or also a scene of him helping Clara out of just confirming Victor’s innocence. From what we saw of Victor he just seems like a very bad guy and Joe not doing anything about it doesn’t help in the slightest. The film’s pretty light hearted for the most part I’d say and has a nice Christmas theme going. It mainly just gets serious at the end with the ending being a little surprising. Definitely not the smartest move on both Joe and Jenny’s part. I think they could have handled the whole thing a lot better. Either way you can do better than this if you’re looking for a good Christmas film to watch this year.