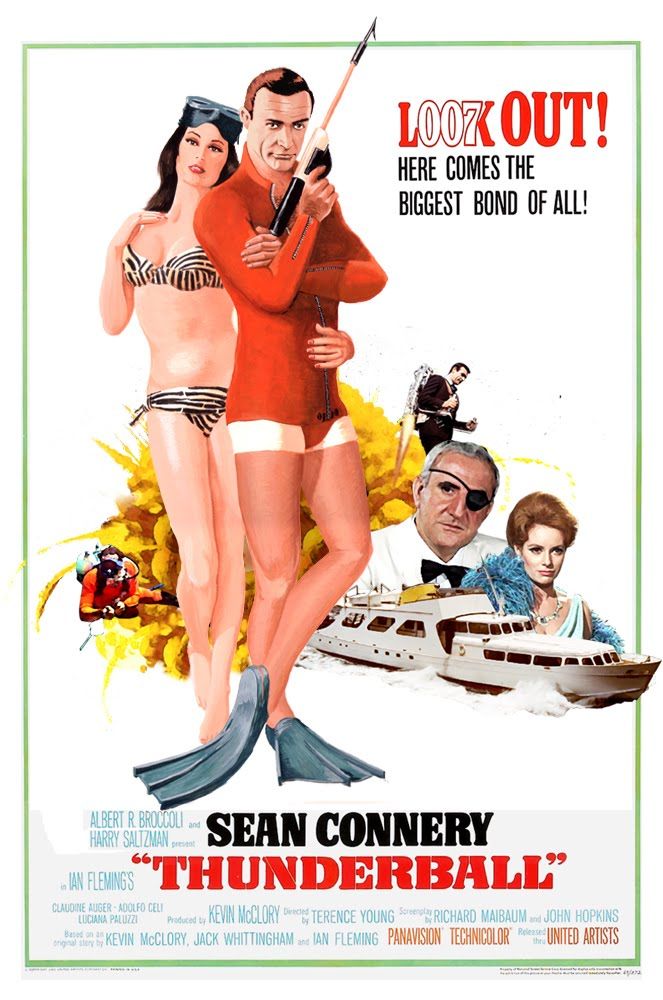 Agent 007 returns in this next caper and SPECTRE has a very active role here. Right from the start they’re holding whole countries hostage which is pretty impressive. I suppose when you’ve stolen a nuke this is just the kind of thing you can quickly get away with. Thunderball decides to have a whole lot of ocean scenes which unfortunately don’t work nearly as well as land ones. At the end of the day you just need solid ground to get that crispy choreography you want for the battles. Thunderball’s a pretty standard Bond film I would say, it brings in about what you would expect from the series.

After SPECTRE issues their demands we cut away to Bond enjoying a nice vacation as usual. The guy seems to have an awful lot of vacations if you think about it, but he is in the business of saving the world so I suppose it makes sense. Well, the resort is awful shady and his life gets threatened multiple times before he is pulled out. M tasks him with finding a lead and Bond remembers the murder event at the hotel and quickly gets on the case. He doesn’t have a whole lot of time to find out where the bombs are as well as the villain base before the government will ultimately have to meet SPECTRE’s demands.

I have to say that right from the start Bond doesn’t look amazing here though. For starters, while he is at the resort he notices numerous times that shady things are going on. People skulking about, going into his room, etc. Yet when it’s hit time for the stretcher exercise he eagerly gets into the machine that has his arms and legs bound. Naturally a villain shows up but instead of murdering Bond he just puts the machine on high intensity so the nurse arrives later and saves him. Keep in mind that we were barely 10 minutes into the film and Bond should have already been murdered. It’s not really a great look for the guy. My idea here is that Bond’s continued success continues to raise his ego higher and higher to the point where he no longer bothers with being cautious. Why be cautious if you always end up winning right?

Well, either way the main chunk of the film takes place in the Bahamas as Bond very quickly figures out that the big villain behind this plan is a man named Largo. The guy isn’t exactly subtle about it though so Bond enjoys humiliating the guy by beating him at cards and dancing with his girl Domino. Bond loves to troll the villains like this but it always ends up with his friends being murdered so was it really worth it? For example, in this case Bond is accompanied by a few other agents. I forget their names, but naturally the girl gets kidnapped and it doesn’t end well while things don’t go very well for the guys either.

You can always expect Bond to be the last man standing in these things but then maybe he shouldn’t be so obvious about his trolling attempts. As always he has a ton of affairs in this film. He throws himself at everyone the whole time so even when you get the emotional ending scenes it’s hard to actually buy into it because you know Bond will be going to the next girl as soon as possible. As always we do have some fun scenes with M and Moneypenny as they both try to keep him on the straight and narrow. M always tends to get the best lines in these things as he reminds Bond of who is in charge here. I’d like to see him get a bigger role one of these days although in a way the small roles help portray him as being fairly invincible as he never gets into the line of fire.

I wasn’t a big fan of Domino here so between her and Bond that means that both of the main characters weren’t great. I feel like it took a while for her to put the pieces together of what happened to her brother. It’s also an example of her not really caring that she was on the wrong side until things got personal so you couldn’t really call her a hero either. She was just content doing her own thing. She does have a good moment at the end of the film though which was a solid conclusion to her subplot. She should definitely be upset with Bond though for giving her such a loud radiation sensor. He had to have known that he was basically selling her life away by giving her that but still gave it to her anyway.

This film is pretty long. I wouldn’t say it really drags on though. The Bond films are pretty good at making sure something is always happening. As mentioned though, I’m not a big fan of the underwater scenes though. The water hampers all of the movements so it’s like the characters are fighting in slow motion most of the time so not much gets done. I much prefer the quick land moments like Bond taking people out at the resort or when he tried to rescue one of the hostages. The scenes on land are just a lot more tense and make for good fights.

As always the film has its issues with the poorly developed romances and tons of fanservice. The beach setting doesn’t really help its case either since you know the film was very intentional about the selection. As long as the movies continue to focus on this I feel like there’s only so far the movies can go. They won’t be able to catch up to the rival franchises either. At least we still have the classic Bond theme so that helps with the soundtrack but you can already tell that it is appearing less and less. Once it stops altogether that will definitely be a pretty sad day. You really need that to complete the experience.

Overall, Thunderball is a pretty standard Bond film. From the early ones I’ve seen so far I would say it is one of the better ones even if it’s almost a by default kind of thing. I do have to say that the opening henchmen who tried to defy SPECTRE is probably one of the least intelligent villains I’ve ever seen. Why would you try to swindle money out of an organization with thousands of members involved in over 100 countries that can murder you in any which way? He was literally a part of the plan where they murdered a bunch of people and assumed their identities. He can blackmail them but they can always just pretend to give him what he wants and murder him the next day. There’s no possible way this would have ended well for the guy so you’re almost rolling your eyes when he asks for the money and confidently starts to walk away. It’s humorous in a sense though. So if you like the Bond films then I’d recommend this one even if just to see how Bond’s lucky streak gets him out of jams this time. Otherwise you’re better off giving it a skip.