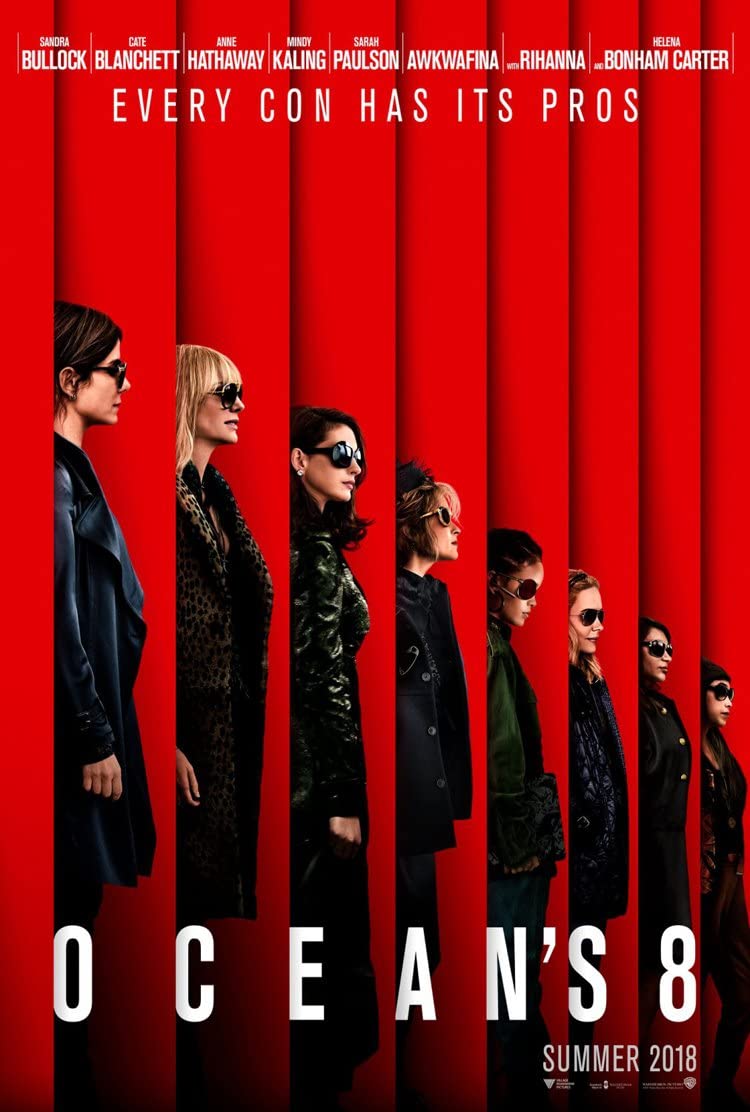 It’s been a while since I saw the original Ocean films so it was time to check out the spinoff. I do enjoy a good heist film like this where it’s not about breaking in with guns and taking everyone out but using a lot of trickery and deception to get to the bottom of things. It’s certainly weaker than the main installments but makes for a good film overall. You shouldn’t have too many issues with the execution.

The movie introduces us to Debbie who has finally gotten out of jail after 10 years. She has promised not to commit any more crimes but can’t help herself. She wants revenge on the guy who got her into jail and wants to make some money on the side. Her objective is to steal a super fancy necklace. To do this she’s going to need to form a whole team. Her main partner Lou is ready for this but they still need 6 more people. It’s time to go recruiting and then the game is on. Can they really outwit the insurance team as well as the people who are in charge of keeping the necklace safe? It’ll take all they got.

As with most ensemble films like this the movie’s first act is mainly about getting the team together. Each character is good at a different task so once they have the team assembled then they’re ready to move out. It’s a tried and true formula which works out pretty well. The characters are decent although there are few standout characters. Then we move to the actual heist which is always a lot of fun because of how much planning goes into that. The real question is always, do you buy into it?

Well, I think most of it works out rather well. Mainly due to the twist of the heroes covering their bases by the end of the film. Without that final twist the whole thing would have blown up and been completely unbelievable. With it, there’s only a few parts that break the case I would say. One is that the necklace was secured so that it could not be removed so easily. Because of this, I don’t see how anyone would believe for a second that it just fell to the floor during the party. It actually would have been easier to just slip the replacement necklace on at that point. Initially I thought the plan was going in a different direction but the whole “I found it in the water” excuse didn’t really fly. I also doubt it would have had the same kind of lock installed so the company would have realized something was wrong from the start.

The other issue here is when the heroes get greedy at the end and start stealing everything. Really guys? That last move would sabotage everything. Put it this way, they now all had to drive off in a big getaway vehicle that was caught on camera. What if the detectives decided to search the vehicle? When you add that onto the fact that Debbie is already a wanted criminal then you’ve definitely got a big issue here. Fortunately they got a certain inspector on the case but things could have easily gotten dicey there.

Those are the two reasons why I don’t think the whole heist would have gone over very smoothly but otherwise I thought the adventure worked out well enough. The film’s pacing is pretty decent. The writing is okay but it does have a tough balance to fill with the humor and heist aspects at times. For example, some of the characters here really aren’t very well prepared to handle a heist so what happens is there will be a lot of gags for the audience like the characters being obvious about what they’re doing but then in universe is raises quite a lot of questions. Again, the film’s final twist does help with this a bit though. The dialogue itself is also decent for the most part but you feel like it could have been a lot better. One thing I would have liked to see was more discussion on planning the heist rather than Debbie setting everything up off screen. The heist itself is a lot of fun though which is always the main goal here.

Debbie is the leader of the crew and the main character so she is the one coming up with all of the plans. She does pretty well at making sure everything is thought through and you do understand why she wants to squeeze the revenge in there as well even if it does ultimately put the whole thing into jeopardy. She could have easily destroyed all of their hopes and dreams with this. After all, the guy could have turned the tables had he not fallen for every trap so obviously. There’s no real excusing the second scene where he receives a call at a very convenient time and still goes to her house to have an affair even though he should know that he’s being framed. He was literally given all kinds of information and Debbie even revealed herself just to rub his nose in the situation. Any halfway decent intelligent character would have figured something was out so Debbie’s risk was pretty huge here. She’s a solid character but not a good leader.

Lou was Debbie’s main ally and certainly the one who got the biggest role here. She was solid and helped to keep the lead grounded most of the time. She’s also got a lot of talents which helps her blend into the role really well. Amita came in handy for the jewel cutting which was one of the most crucial parts. Tammy was fun as one of the more down to earth characters who had a pretty content life before getting mixed up in all of this. If anything she should have said no since the risks heavily outweighed the rewards here.

Constance was one of the standout characters here since her sleight of hand is quite impressive. Without those abilities the plan would have to be dramatically altered. Nine Ball gives the team the tech advantage they would need for this case. She’s not as solid as the other characters but does well when needed. The weakest link is definitely Rose though. She’s the old art dealer who helps out with getting the necklace but she is not good at the criminal game and really puts everyone at risk. Then you have Daphne who is a main focus here since the heroines are trying to manipulate her into being in the right place at the right time. She’s much more self absorbed than most of the other characters but does come off as one of the more likable ones. I was also glad she was shown to be a little more intelligent than she would let on.

Overall, Ocean’s 8 is a good movie. It has more positives than negatives. It may ultimately feel a lot weaker than the main one so if you compare them directly then this will lose out but on its own I would still say it’s worth a watch. I’d certainly be down with a sequel as well. That said, the movie should be a little more careful with its title. If you’re paying attention to that then you’ll know more about the film than you’re supposed to. All while it’s playing you’ll be counting to 8 and so if the numbers don’t match up….well it’s something to think about. I was surprised the ending didn’t have some kind of big reveal or plot twist for the climax but I suppose they didn’t want to tip their hand in case we don’t get another film. Perhaps that is for the best but I have to say it would have been a hype way to end things off and an improvement on the ending. The ending was satisfactory though.