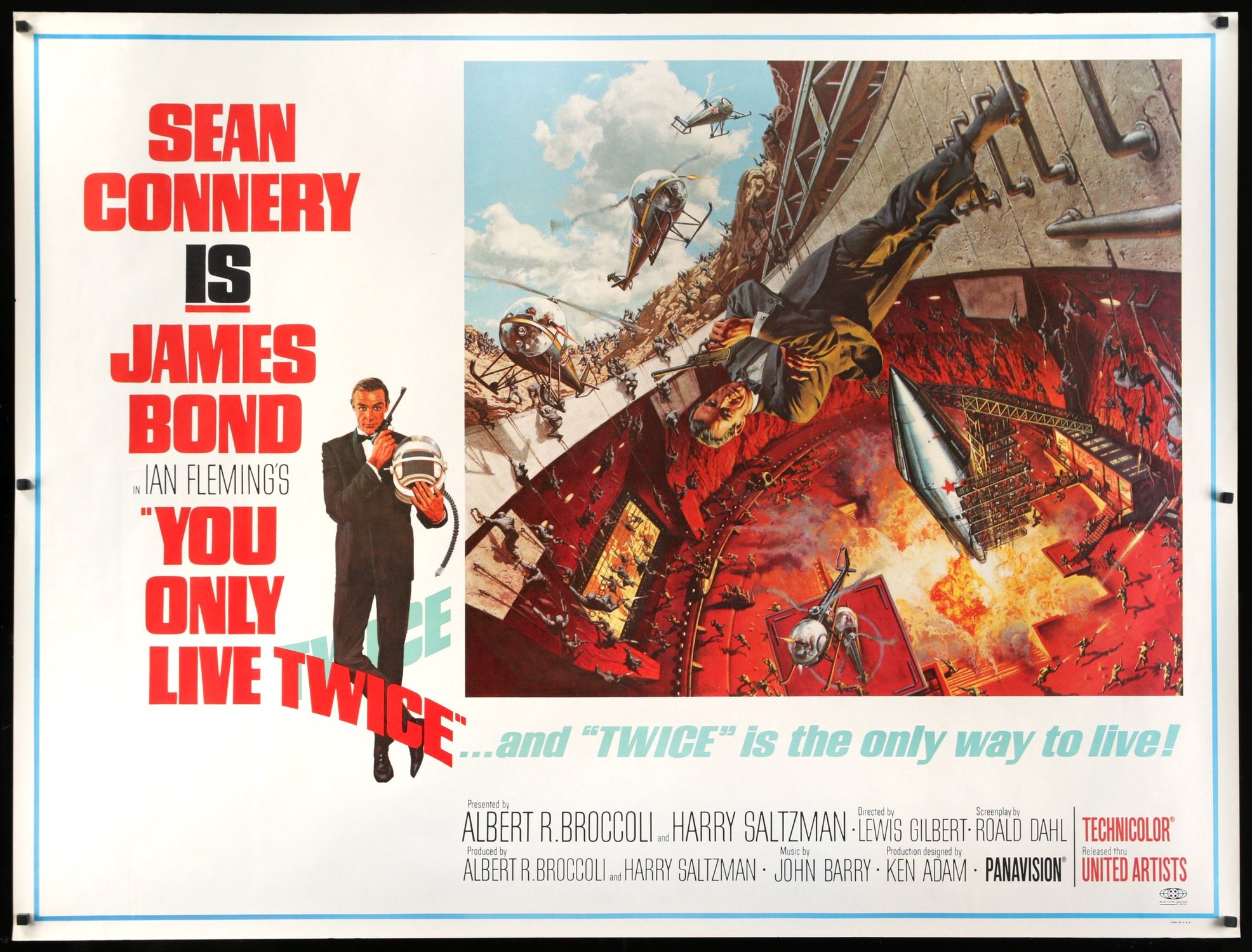 Bond’s adventures continue with some more espionage and thriller elements. Here’s the thing for Bond though, he’s been relying on luck for quite a while now so what happens when it runs out? That’s something Bond’s going to have to think about here as the leader of SPECTRE finally gets to appear. Ultimately this film is more of the same in many respects. It is going for a new element by having Bond stay in Japan for a while but I would say the core of the film is basically the same.

The movie starts with Bond having yet another affair. This one ends a little differently than most as the girl quickly calls in her goons and they all shoot Bond down. Seeing Bond get murdered within the opening minutes was definitely a chilling experience. After Bond gets back into the sub where we find out he faked his death, he is given a new mission. Some kind of space creature/machine has been eating up every rocket sent into space. The U.S. thinks Russia did it while Russia is blaming them. Bond has to find out who the true culprit is before World War III commences. The heroes believe the rocket may have originated from Japan so that’s where Bond is going. Will he be able to crack the case?

I don’t think anyone honestly thought for a second that Bond died in the opening scene but it definitely would have been a pretty interesting twist I gotta say. His distractions would have finally cost him everything. This film is not kind to Bond for the most part though. He looks pretty bad as expected but not just physically here. Lets start with what had to be the most entertaining scene in the film. Bond is faced off with one of the big villains and they slowly start to walk towards each other.

Sizing each other up and all. Then the guy just throws out a punch real suddenly that knocks Bond for a loop. Bond was completely unprepared for the punch and you would have thought that it wouldn’t have been a surprise since a fight was about to start. I guess his reaction times just weren’t on point. Then there’s the fact that he is still confident as ever so he doesn’t mind his surroundings anymore. He meets with one of the big suspects and just assumes he can casually leave.

If not for the heroine showing up in time he would have been gunned in the back without suspecting a thing. There’s another scene where his informant is stabbed to death while Bond was having his drink. You can’t blame him for that one but at least he knows to watch his back because the enemies are everywhere right? Well, that’s not exactly the case either. Bond goes to sleep real quick later on and nearly gets poisoned to death if not for the heroine stepping in once again. This really isn’t Bond’s best day but he hasn’t had one of those in a while so it’s not too surprising.

The action scenes are okay when they happen but I wouldn’t say there are a whole lot of them in this film. The movie tries an interesting sky view for one of the larger action scenes but I wouldn’t say it works particularly well. It feels less like a battle and when the villains jump backwards it doesn’t even seem like Bond connects with them. The Japan backdrop for the movie was nice but they definitely didn’t paint the place in a really flattering light. Bond’s liaison there goes out of his way to say that women are second over here and has what equates to a bunch of female servants working for him. This is one of the heroes we’re supposed to root for eh? Bond fits right in with all of these guys.

You Only Live Twice has more dead time than the average Bond film so at times things can almost get a little dull. I’d hesitate to say that the movie actually gets boring at any points but I would say that it is just a bit more aimless than some of the others. I also thought the countries looked pretty awful just sending their rockets up without a plan. Maybe the first time but sending it again after the others were captured and you don’t even give the pilots guns? The whole thing just made SPECTRE look good of course but at the expense of everyone else.

The leader was decent even if he’s not very smart. You’d think that as the big boss he would have everything going according to plan but Bond plays him like a fiddle. Aki does well as the main heroine and is one of the better ones in the Bond films. That being said, while she does make Bond look poor in comparison with how she keeps on saving him, she also hurt’s Bond’s character further. After the villains get to her Bond wastes almost 0 time in going for the next girl so once again you see how he doesn’t take anyone seriously.

In a way this feels like it should end the SPECTRE arc. I suppose the villain got away but at this point he won’t have the same mysterious aura anymore. Well, I suppose hopefully he can come up with another good plan. This bond film suffers from poor romance, fanservice, and an unlikable cast so the rest of the review would be rather par for the course. It could be a while til the next Bond film but at least as of this point you can’t say that Bond forgot its fundamentals. It delivered consistent performances through and through.

Overall, You Only Live Twice is definitely a pretty interesting title. Bond does act like he has multiple lives most of the time so it’s pretty fitting. As always I feel like the Bond films would be so much better if they would focus on the secret agent stuff and leave Bond’s hobbies alone. Have him act professional once in a while even if it’s just to be a change of pace. I dare say that would go quite a long way. Maybe the Bond films will be able to do this in the future or at least that’s the hope.