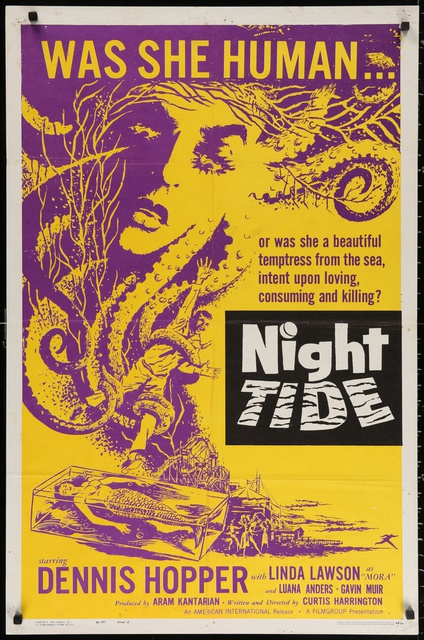 Night Tide is pretty much bonkers. As the film is going on you are wondering what the point is. On Wikipedia I see this is sometimes labeled as a horror film but don’t buy into that. Nothing could be farther from the truth. This is as much a horror film as the Maze Runner. There are some ideas here that are decent at best but then you have to contend with a slow moving plot and a climax that just isn’t nearly as dynamic as it could have been. I wouldn’t call it a bad film but it’s really right in the middle.

Johnny has finally gotten a break from being in the navy for a bit so he heads to a bar to try and find a girl. His useful pretense here is that he came for the music. Well, he quickly meets a lady named Mora and desperately begs her to go out with him. She eventually concedes and the two get close but Johnny finds out there are ominous rumors about her. She had two other boyfriends recently and both ended up being drowned. There’s no evidence that she did it…but it’s a bit suspicious all the same. So, what can ole Johnny do now? He is still desperate to be with Mora so he decides to just roll with it but this could be his last decision.

I think we can all assume from the start that something fishy is going on here. The thing is, Johnny just isn’t a likable character in the slightest. Aside from being desperate for romance he’s not the sharpest tool in the shed. He knows that at the very least he needs to be careful when there’s a full moon out. Don’t go near water but Mora asks him to go with her to the deepest part of the ocean so naturally he says yes. Johnny only has his main character plot armor to protect him because his decisions certainly don’t put him in a great spot. Then you’ve also got the fact that his feelings are very weak. Let’s just say that he’s very quick on the rebound so he doesn’t seem to even care which girl he is with.

Not the kind of lead you want to see. I wasn’t a big fan of the heroine Mora either. Of course I can’t say if she is truly a heroine or an antagonist as the film wants you to figure that out, but either way she really gets tricked pretty easily. Surely she should have known something was up in previous incidents. I think it’s fair to say she was probably a bit loopy but she seemed sane enough to be able to connect the dots if you ask me. Instead she just kept on sinking. Even when you have a mysterious lady hurling some kind of threat at her, Mora is quick to leave instead of seeing what this is all about.

The only other big character here is Murdock and he’s definitely one of those guys who likes to spread rumors. He talks a lot about the ocean and such but also slips in some more suspicious things about Mora. There’s nothing much to say about this guy but in his final scene he helps to make Johnny more unlikable as well by convincing the lead to see his point of view. There really wasn’t anything to see here though which is why it doesn’t quite work out so well.

I wouldn’t say the writing is that bad, but it feels like there was no ending in mind. Throughout the movie there’s a bit of a suspenseful feeling in the air. The color scheme is rather dark for the film and the beach can look pretty ominous at that point. In the climax it’s raining and pitch black out so when Johnny enters the tent you know that something’s going to happen. The film excels with these moments as you should be pretty interested in what’s going to happen next. With a more satisfying ending I dare say that this would have worked out well.

The issue is that the ending just feels pointless. Nothing was really accomplished and then the film decided to take the easy way out by leaving all kinds of possibilities open. So you can effectively choose your own ending here and that’s never the route you want to go. A film should be confident in its choice from start to finish. An ambiguous ending on its own isn’t bad but the execution here was poor. The final scene will probably make you roll your eyes when you consider that not a lot of time has passed since a recent tragedy but the characters don’t seem to care much. That may be indictive of the film itself though. In general the film’s biggest weakness was just not having enough strengths. It’s not a bad movie but it’s not a good one either. It just coasts by with a lot of soulless scenes that can be decent at times but never end up connecting into something better. The movie has some dream scenes that show you what the film could have been like though. Those tend to be pretty intense and more like the posters the film was advertised with. If the film had gone down that route I’m sure it would have at least been more exciting.

Overall, Night Tide is a unique film. It’s suspenseful and keeps you engaged just long enough where the film will just fly by. On the other hand, the ending makes sure you don’t enjoy the journey as much as you could have and holds the whole thing back. A better main character would have gone a long way as Johnny evidently just wasn’t ready for the big stage like this. The movie does squeeze in a quick action scene at the very end though so that was pretty neat. I was beginning to think we probably weren’t going to have any so that was good at least.