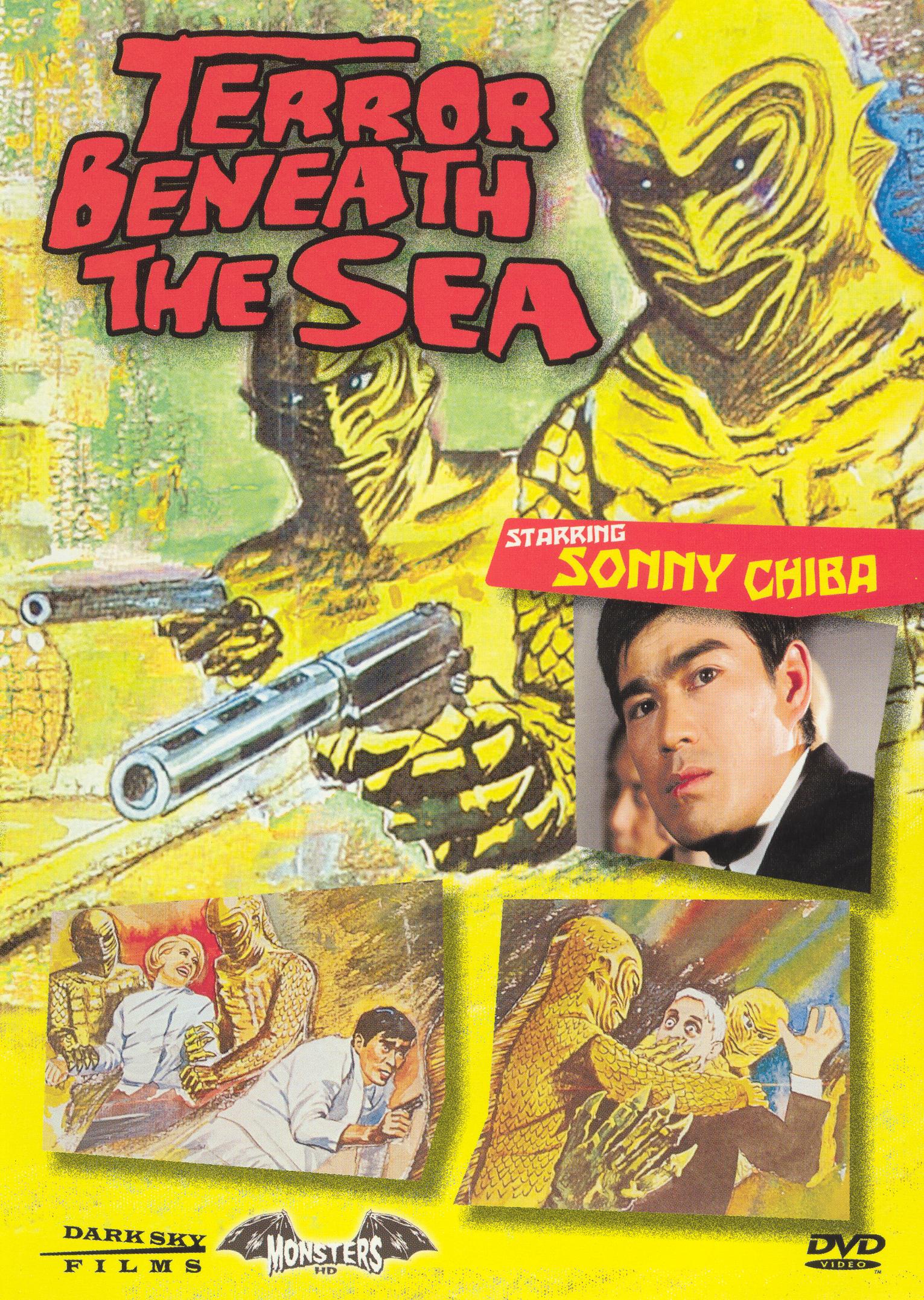 When you think of creature features you’re probably thinking of something along the lines of The Creature from the Black Lagoon or something like that. Well, this one definitely holds its own with those and even beats a lot of the classics. The monsters are actually pretty impressive here and the main character can really fight well in hand to hand combat. Mix those things together and you’ve certainly got a winner on your hands.

The movie starts with the Navy demonstrating their new torpedo’s to a bunch of reporters and government workers. It’s a torpedo that hones in on a target and has amazing power. It’s 99% accurate which sounds pretty impressive. During the demonstration they see what looks to be like an alien life form. Of course the government doesn’t want to confirm this so reporters Ken and Jenny decide to check things out for themselves. Unfortunately they’ve stumbled upon something that may be bigger than they could have dreamed.

In a way the film is blending your usual creature feature type film with more of a martial arts adventure. To an extent this feels more like a classic Godzilla film than the creature that couldn’t die or any number of films like that. The writing is excellent here with a lot of solid lines and characters. You may not remember a lot of the specific character names (I had to look them up for the leads) but they are solid characters. Just seeing Ken go out and start fighting these creatures instead of just falling over was a nice improvement from the usual lead in these films.

Ken’s a very solid main character. As I mentioned, he isn’t afraid to go out and fight these guys head on. He’s brave throughout and was also quick to go to Jenny’s defense when the admiral was taking shots at her. He’s a standup guy and someone who isn’t afraid to risk his life for a good story.

Jenny is also pretty solid here. Dropping the camera was pretty unfortunate but she was always willing to go with Ken on the dangerous diving tasks to find the cave. Even when the admiral was basically insulting her to her face like asking if she had seen a psychiatrist or saying that she was hysterical. Jenny took this in stride and continues to back up that she had seen something down there. The government also basically knows that she is right but can’t admit it in case of bad PR. I’m not even sure what the government’s plan was long term since the truth was going to come out at some point anyway.

Now it’s a rather small thing but there’s a scene near the middle/end of the film that drags on a lot. It’s when the movie is showing us the process of creating these creatures. It’s a bit of a grotesque transformation as they turn from humans into these aquatic beings. It’s certainly a rather unfortunate fate for these poor guys. Sometimes earning powers feels like it’s worth it but not in this case especially since it’s not like you can change your appearance back to what it used to be.

The actual design for the creatures is great once you get past the transformation though. They look sort of like the Gill Man. They have a design that allows them to fight rather well and the film takes advantage of it with some real fight scenes. Both hand to hand action scenes as well as gun fights. It’s a solid mix so you’ll be engaged from start to finish. Even the final climax gets more intense than you’d expect with a last run for safety and a big battle against high odds.

There’s one plot in the film that feels rather pointless though to be honest. So after the subs locate the monsters from the opening scenes…they don’t do anything. The navy basically tells the captain that they are not allowed to make a move. So throughout the film the captain says he’s going to go down anyway and the guy reminds him that he is not allowed to make a move. This scene is effectively repeated 3-4 different times with variations of the same conversation. By the end the guy still hasn’t done anything so I just wonder what the point was. If it was meant to be a humor plot…I don’t think it really worked.

This movie’s just a little over an hour so it’s a very short one. It makes for an easy watch and that’s why it’s impressive that it stood out so much. I dare say that you will remember this film a whole lot more than your average creature feature. The main villain is also pretty memorable and leaves an impression. He’s one of those guys who always wears sunglasses, even when indoors and in a bright room. He does let his guard down rather easily at the end of the film which is pretty much fatal though. Just a few more minutes and he would have made it to the end.

Overall, The Terror Beneath the Sea is a film that certainly surpasses expectations. I’d say you can look forward to a very fun experience here when you check out the film. It’s got a good story, a solid cast, and great writing. Throw in the good battle scenes and this movie has everything you can possibly want. The line delivery is always on point and it’s a film with high replay value thanks to the length and battles. This is the kind of film I’d like to see more of nowadays. The title is also a keeper because it’s just so direct so right away you get the right idea about what is going to happen here. If we could have actually had some progression on the whole captain plot in the sub that would have been ideal though. I still find it hard to believe that the plot didn’t go anywhere and wonder if there were some extra scenes that didn’t make the final cut.

2 thoughts on “The Terror Beneath the Sea Review”