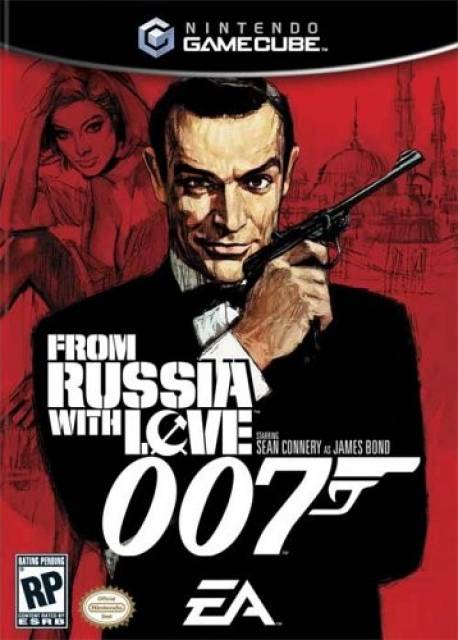 From Russia With Love certainly left quite an impact to even get its own video game eventually. Bond has had quite a few games which tend to range from being first person shooters to third person. Fortunately this one is the latter as I tend to prefer that style. It’s a pretty good retelling of the movie’s story and even throws in some extra moments to extend the playthrough. The game’s at a reasonable length and has some bonus levels to strive for as well.

The basic plot is that the villains at Octopus (Yeah that’s their new name now instead of Spectre) have decided to trick Bond once again. They get a former Russian agent known as Tatiana to pretend to work with Bond and get him to take many risks in obtaining a device. She believes this is a legitimate mission from Russia and doesn’t realize that it’s a trap. Bond knows it’s a trap but wants to enjoy himself so he looks the other way. The characters are now on a collision course and Bond will have to watch out for an assassin that is coming after him. Will Bond be able to survive?

There are around 22 levels in the game and the goal is usually to grab some intel or just make it to the end in time. Each level has a few different objectives and once you complete them all then the mission is over. Pro tip, if you’re close to dying but about to clear the objective, just run as fast as you can. If you complete it even for a second before dying, it will create a new checkpoint so you recover all of your health when you wake up. This saved me quite a few times.

The game is rather difficult so you really need to make each shot count. Just go in guns blazing and don’t worry about the rest. The toughest enemy to deal with is a big guy who runs in with a machine gun. He can completely destroy you with just a few hits so you desperately need to pepper him with assault rifle rounds of your own or it’s game over. It’s really impressive just how daunting of an opponent he is to fight. If you lower your guard that’s it. He’s even stronger than most bosses.

Most of my losses in the game are due to this guy showing up. You can switch through your weapons and gadgets during gameplay so always try to keep an eye on which one has ammo. Another tip is that most guns have a second kind of ammo so if you run out of the first, go into the menu to switch to the other one. For that reason you should start with the backup ammo since when you finish it automatically cycles back to the normal one. It’s a pretty good way to do things.

The stealth mechanics are also handy. If you sneak up on an opponent from behind you can take him out in a single blow. This can often be very handy since you don’t have to use up any health. It’s also worth noting that the game has an upgrades section. You can build up your guns or even your armor by spending achievement points. I never quite figured out how you earn those points but by the end of the game you should have a good amount. I highly recommend using these on your armor since it extends the health bar which is incredibly useful.

If you ever do end up getting stuck in the game you could probably go back to old levels to earn more points. I assume that would work and the more level ups you get the easier the game would be. That being said, you should be in a good spot for most of these levels. The toughest level in the game by far is the first boat level. I lost that one many times before finally winning. It’s definitely difficult when you’re not at the wheel. The driver really tends to turn at the worst moments.

The graphics are definitely sharp. The game felt rather cinematic as it used cutscenes to reenact a lot of big moments from the film. We even get true fight scenes in the cutscenes which is impressive. The game put in a lot of effort and I’d say it was rewarded since the game is rather well known. This may be based on a movie but it’s no cash-in. The soundtrack is good as well with the classic Bond theme playing a few times. Aside from Bond’s voice sounding noticeably older, the game really sounds just like the movie.

So the base game is probably around 5-7 hours and then with the extra levels you can bump that up a bit. Earning all achievements should take a while too and then the game also has a big multiplayer mode. That really helps to amp up the replay value since you can have a blast staying there for hours. I’d expect no less from a big Gamecube game that’s for sure. The game was very well done and I look forward to seeing what Bond comes up with next. The series lends itself well to a third person shooter style.

I’d like the next ones to keep in the upgrading system as I always like things like that. It incentivizes you to grind the old levels to get stronger and stronger. If I had my way then all games would have some kind of level up system since it’s just so much fun to have. You never truly feel stuck when you can go back and get even stronger.

Overall, From Russia With Love is a pretty fun game. It’s a title that should be nostalgic for long time Bond fans. Even if you haven’t seen the movies you should be pretty well set here though since the game adapts the whole movie so it’s pretty new user friendly. At its core this is a story about agents from different countries all being manipulated by the villain organization. That’s a plot that you can dive into without any issues.