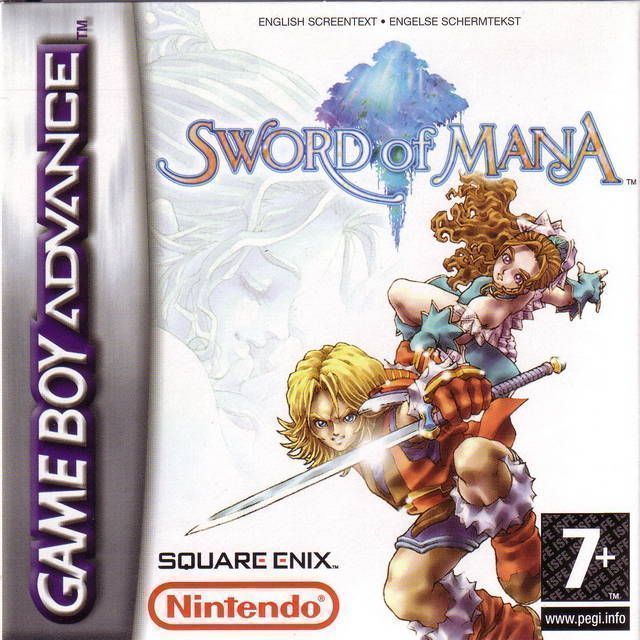 The Sword of Mana is a game I’ve owned for many years at this point. It just kept getting passed by other games but no longer. I finally went in and completed it. The game certainly played really well and lives up to the Mana brand. The real time action is a nice touch and the story got rather intense with a lot of twists and turns along the way. It’s a good reminder as always on why I like the RPG genre so much. There’s always so much to do in these games.

The two main characters don’t have formal names so I just called them Terry and Daisy. Well, the game starts out with the two characters on the run as their parents are hunted by the Dark Lord. Unfortunately Terry ends up tripping so the two get split up. We fast forward a bunch of years to where Terry is now forced to fight as a gladiator for the villain’s amusement. One day he manages to escape and meets up with a girl who looks just like Daisy. Together, the two of them will find the legendary Granz and take the Dark Lord down!

Of course for an RPG like this you already know there is a lot more to the story than just that. The Dark Lord is not so easily defeated after all. The heroes meet up with a man named Bogard who was a friend of Terry’s parents and a lot of other characters. Along the path to saving the world the heroes will see other kingdoms, meet a demon, and other villains are also along the way.

This RPG isn’t quite as long as some others as it’s a little under 20 hours but you still get to do a lot. I would say you’ll end up pretty satisfied here to be sure. Not every game needs to be crazy long after all, although I will admit that for RPGs I like to see them 20+ hours long. For normal games I strive for at least 10 but of course each genre tends to have their specialties in that respect.

Sword of Mana also has a lot of replay value with the side quests going on. I assume some are probably skippable so you’ll want to do them as you play through the game rather than just waiting until the end. There does not seem to be a post game though as the game just freezes after beating it so you have to turn it off at that point. Perhaps that triggers something to change within the game itself so you do unlock the post game but I’m not sure of that myself. Either way there’s enough to keep you busy.

As expected the graphics are quite sharp here. The sprites are well animated and also have a lot of depth to them such as the characters whisking out their swords and even sitting down for dinner. The developers added a lot of extra animations to really make this as realistic as possible which was cool. This was clearly not the kind of game that was thrown together at the last second but had a lot of effort.

The soundtrack is also pretty solid. Now, I wouldn’t say it quite matches up to a lot of the all time greats when it comes to RPGs but there are enough quality tunes for this one to still hold its own at the end of the day. The main boss theme for example is a pretty solid one.

As for the gameplay, it’s a real time combat title as I mentioned earlier. You obtain many different weapons during the course of the game but you’ll get the most mileage out of the Sword, Bow/Arrow, and your long baton of sorts that extends. You will use this to cross large chasms. Perhaps you will grow a liking to another weapon along the way but I just can’t go wrong with swords. They’re always just so much fun to use.

I will say that the game’s way of letting you power up your sword can be a little complicated. You need a lot of materials and have to find a blacksmith. So due to that I just used the basic level 1 sword for the whole game until the final boss where I finally got a really cool one. I can tell you that I felt the immense difference as soon as I picked that one up. Now that was true power right there.

Whenever you level up you are given one point which you can put to any attribute. This will determine what your stat boost will be so choose carefully. You also unlock classes depending on what your focus is. If you don’t have a focus then it could get a little tricky for you. I went for one of the warrior classes which means putting the points away into strength, random, and a little into magic I think. It’s worth it because you get a crazy power boost which really served me well.

The game knows that you’ll be focusing on the sword though so there are quite a few bosses where you can’t even attack the bosses that way. A lot of them fly away so you have to use a projectile weapon. This could be a little cheesy but they probably knew that otherwise you would really be steam rolling through these guys. That’s how insanely powerful the sword is. There’s no enemy or boss who can last for very long against it.

My final note would be if you’re ever in doubt, grab some level ups. The EXP system here is pretty well balanced so leveling up doesn’t take too long. As soon as you get $10,000 make sure you buy the EXP brace to double your EXP. Trust me that is worth the purchase because it makes a huge difference immediately. There are a few puzzles that can be tough near the end of the game so brace yourself for them. In particular Dime Tower doesn’t hold back. If you see that a light isn’t showing up to signify that you completed a puzzle on the floor, go back down. For some reason puzzles can be on the wrong floor to trip you up so don’t fall for it!

Overall, Sword of Mana was definitely a lot of fun. It’s a very well balanced RPG and one that had a really wide cast. The story certainly shifts a lot by the end with all the new villains and plot twists. The Dark Lord was a really fun character throughout it all and he got quite a few battles with Terry. The game wasn’t afraid to have the hero lose a few fights that’s for sure since he took quite a few Ls as the game went on. If you’re looking for an old RPG that has aged incredibly well, look no further than this title. The Sword of Mana is just what you’re looking for.