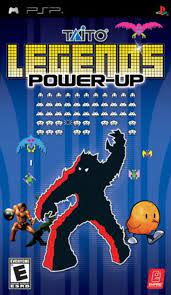 This is a game that I sort of got out of the blue because I wanted to finally check out the original Legend of Kage. Not only did this collection have the original but it also had the remade version that had a more 3D look to it. There’s a pretty solid collection of games here as well so it’s got some pretty decent value. At the end of the day it’s hard to really deny that this title has a lot of replay value. Surely you should be able to enjoy most if not all of the titles here.

None of the games really have much of a story mode of course since these are really arcade titles. Mainly the point of the game is to play all of these titles out and get your high scores in there. You’ve got sci-fi games, ninja titles, and even a game that’s sort of like Monkey Ball. The amount of variety here is impressive and while you may not put these games up against the true classics like Mario and Pac-Man, they hold up well enough.

Super old games are usually not really my thing since I can only play them so long before I need a break. That being said, I’ll still have fun while I’m along for the ride. Since Legend of Kage is the reason I was buying the game in the first place lets lead off with that. The game involves you throwing stars and slashing away at the enemies. The goal is to make it to the end of the game before they take you down. It’s a rather difficult game but with enough tries you should be able to conquer it. When you lose you can restart as many times as needed so you don’t need to worry about getting a game over. That would have definitely hurt the momentum.

You’ve got games that feature skiing, monkey ball, a bunch of sci-fi shooters, and a game that works a lot like Pac-Man. Basically you have to race around the stage and get all of the pellets before these opposing airships tag you. It’s very difficult because they are much faster than you. I don’t want to say that the game is luck based…but it sure feels that way at times. Escaping these guys is really hard to be sure.

As a collection Taito Legends accomplished what it set out to do. None of the games may stand out on their own but when together they make for a decent game. The graphics are pretty solid here so the quality of the old sprites is on point. The soundtracks are good too. I wouldn’t say they are particularly notable but they do have a lot of energy so they fit right in while you’re playing through the game. You probably won’t even notice the tracks a lot of the time. Maybe if there was some extra rock or something.

Since a few of the games have the original version as well as the enhanced remake it’ll be interesting to see if any of the originals can beat their powered up versions. I find it is usually very difficult to beat a newer version but that doesn’t mean it’s impossible. Sometimes the new version may try too hard in trying to be better and miss something that gave the original its charm. This title allows you to try both versions back to back to see how it really stands up.

There isn’t a whole lot more to say about the collection due to the nature of the game. Really this will either be your style or it won’t be but you should know right away based on the kinds of games you enjoy. That is really the deciding factor here. I’m not sure I would buy a future Taito collection but if they ever decided to bundle up a lot of very new games that could have a lot of potential.

Overall, Taito Legends Power-Up is a good game. I’d recommend checking it out if you like playing the classic Arcade Games. Naturally you would want to skip it if you’re more into the modern titles with story and cinematics. That’s mainly where I’m at but at the same time it can be fun to relive how the games used to be. After all, for their time I’m sure these were considered to be top notch.