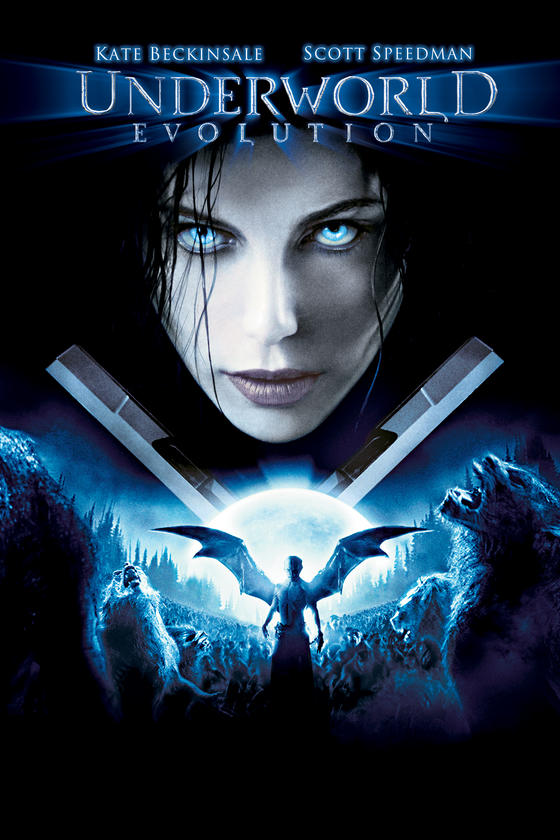 Time to delve into the sequel to the original Underworld film. It was a film with a very interesting concept. While the movie ultimately ran into a lot of issues, it did capture your attention. Evolution switches things up quite a bit. Ultimately I would say the first film wins but it’s fairly close and the film did some unexpected moves which I thought was admirable.

The movie picks up right away with Selene and Michael still on the run from the vampires. They need to find Markus since he is the last remaining elder alive. Now….they know for a fact he is back at the mansion where the first film’s climax is so why are they searching? Presumably Selene is suckering Michael so she can leave him at the safe house and go on a solo mission but it seemed at least for a bit like they were going to legitimately search. I dunno, just one of those things I guess.

Well, either way they won’t have to search for long. Markus awakens and murders Kraven before attacking Selene. Fortunately she and Michael are able to fight him off. Markus’ main objective is to awaken his brother, the king of the werewolves known as William. Together they can rule the world and create an army of hybrid warriors. Can Selene possibly stop such a powerful threat?

Compared to the first film, this one’s more of an isolated adventure. The war isn’t really the focus here so it’s more of a direct “Stop Markus at all costs” adventure for the heroes. I suppose without Lucian the Werewolves don’t really have a whole lot of backup anyway though so it’s in their best interests to let the vampires destroy themselves. Selene is a little more distracted here than in the first film since Michael still plays a main role. They need to bump that guy off already.

He hasn’t really improved from the first film. Additionally, he may be a hybrid but the guy is still getting absolutely wrecked when he fights another powered up fighter. His super speed from the first film appears to be gone as well. None of the fights in this film are quite able to match up to the climax of the first and I miss some of the bigger gun fights but we do have more battles between the metahumans hybrids so that’s always nice to see.

There’s still quite a bit of action here to be sure. Hopefully Michael ends up getting more of a personality for the third film. Getting weakened and having to drain Selene’s blood isn’t really doing him any favors. As for Selene, she finally gets a power up here which is nice to see. I can only see this being a net positive for her since it means she should be able to dominate most of the cast now. Very few fighters should be able to match up to this level of strength.

As for Markus, he’s not nearly as impressive as Viktor. The guy is strong but you don’t get the feeling that he is worlds away from the others as you did with Viktor. His final fight with Selene is pretty good though. The guy may not seem like much of a hero but I suppose at the very least I’ll give him points for being very consistent about wanting to help William. The poor guy’s been locked up for hundreds of years which is crazy when you think about it. I suppose Werewolves don’t need food the way that vampires do or he would have really been shriveled up by now. William doesn’t really have any character though as he’s a pure wolf meaning he is basically mindless. He only has just enough of a mind to know not to attack Markus.

Underworld: Evolution falls into most of the same cinematic traps as the first film. The violence is quite over the top with all of the characters being hacked to pieces and dying in rather gruesome ways. Nobody ever gets a really happy ending in these things when you consider just how much they had to go through first. The fact that the film’s about Vampires and Werewolves means you’re going to see both species biting into each other the whole time.

There’s also a lot of blood sucking which is always annoying and rather gruesome. Now that this film shows it as the main way to see memories you can expect to see it a whole lot more often than usual. Mix in Michael’s low stamina and you’ll have more scenes of it as well. Some horses even get mixed up in the action which is sure to have you shaking your head.

The memory absorption also creates a rather big plot hole to the first film I have to say. Viktor did not believe Selene initially about Kraven because the transfer was blurry. All right…so he could have bitten her at any time to read her mind and didn’t? Clearly this wasn’t thought of until the sequel but it definitely creates a bit of an issue there. Not the biggest thing of course but it’s an element that still sticks out.

One of the biggest disappointments has to be Alexander here though. So this guy has a whole government force working for him as he silences the truth about the war between the supernatural forces. As the father to both leaders he wants to stay neutral. That’s all well and good but he should have incredible abilities right? Well, not really since the guy goes down to a single hit and never even looks slightly intimidating. Now that’s a quick way to make this guy as underwhelming as possible. If he doesn’t want to fight that’s fine, but allowing yourself to get messed up like that? It’s pretty unfortunate to the men who worked for him. I’m still waiting to see a true human force show up to mess with both sides.

Overall, Underworld: Evolution is pretty similar to the first film. So if you liked the original then you should like this one as well. It’s not trying to tackle a lot of the more ambitious plot setups as the first one and is going for more of an outdoorsy vibe than the cool city aesthetic with the characters prowling around. I’d like to see more of a return to form when the sequel comes up but I suppose it’s rather relative since I don’t see the film fixing any of its core issues in the near future. For now this is still a series to skip. With all of the vampire elders down for the count I’m expecting some secret Vampire King or something. If not, perhaps Selene can rule them now since there’s nobody who could possibly oppose her right? Have Michael rule the Wolves and then just like that they will rule the whole planet. Having them join forces against aliens or something would be awesome.