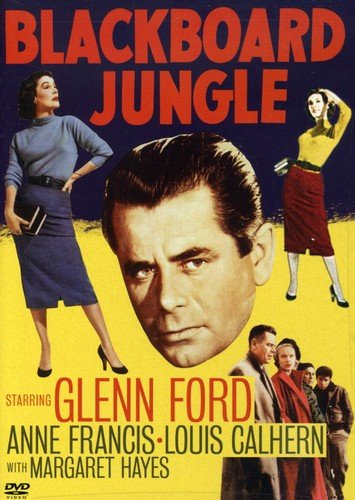 Public School has always had a reputation for getting rather tough depending on what schools you go to. You see bullies in all kinds of media that take place at school but the extent to which the bullies attack will certainly vary from place to place. Blackboard Jungle takes you to one of the more intense classes and certainly means trouble for the main guy. You do feel like the bullies get away with a whole lot here though and everyone turns a blind eye which can get annoying.

So the film starts with Richard finally getting his first teaching job. It’s something he’s been looking forward to for a long time since this is the career he wants to follow. Joshua and Lois will also be starting their tenures at the same time. Why so many open spots? Well, nobody wants to teach at this school because it has a reputation for housing the worst students possible. You’ll likely leave in an ambulance and so the vacancies keep piling on. Richard figures he can handle this but is he really ready for this school?

Within a week of teaching Lois gets assaulted, Richard gets severely beaten, and Joshua’s priceless record collection gets utterly smashed. Yeah this school lives up to its reputation for sure. Richard figures out that Gregory seems to be the class leader to an extent and figures that if he can win him over, the rest will follow. It’ll be difficult though since Richard isn’t exactly the most subtle guy around and if Gregory does a 180 just like that things are going to get dangerous. With both of them on different sides there are no easy paths.

My main issues with the film definitely come from the faculty though. All right so first off lets touch on the scene where Richard gets completely beaten up in the alley. He’s jumped by around 7 kids so he and Joshua are quickly taken down for the count. The next day when the police arrive Richard doesn’t want to cooperate. Now he figures that getting sent to jail or reform school will do a lot of harm to these kids…but these kids are doing a lot of harm to others right now.

I can’t get behind the lead’s decision to act as though nothing happened. We later see a few of these kids jump a pair of deliverymen who hopefully live through the ordeal but at the very least their truck was taken away. Those are injuries and possible deaths that are now directly on Richard’s shoulders. In effect he’s enabling this behavior to continue by not helping.

Then you have Joshua who at this point knows a lot about how dangerous the class is. Yet…he’s going to bring his priceless record collection into work? Why?…that makes no sense. He must have known how this was going to go. Instead he’s man handled by the kids as they break all of his records and he can’t do a thing about it. It’s the kids’ fault of course but I also have to shake my head at Joshua having such an idea in the first place. Common Sense alone would tell you that this is a really bad idea.

Next up one of the kids also attacks Lois and things could have really gotten ugly if Richard hadn’t noticed in time. Bear in mind that the kids attacked Richard later on as revenge for getting this kid into prison. If the kids are sticking up for this guy then they’re just as bad so even more reason for Richard not to look the other way. This scene is especially dark even for this film also. The school looks pretty bad for allowing this situation to even come into play.

Lois is a rather shady character throughout the film with how she goes after Richard but still didn’t deserve this kind of scare. The worst part is that one of the other teachers foreshadowed that this might happen and yet evidently nobody took any steps to help out. This is where I bring in the principal in my blame game. The guy seems to be completely oblivious to everything going on in his school. It’s like he doesn’t even realize the reputation his classes have or that none of the teachers take their jobs seriously. That means the principal isn’t doing his job well either to be so out of the loop.

He needs to get in some safety features and actually take an active role. Otherwise it’s all just talk on his part. While most of the kids here are pretty awful Artie is shown to be one of the worst ones. That buy is constantly trying to get the kids to go in as bad a direction as possible. Unfortunately pretty much all of the kids are ready to follow his lead. The only kid shown to even be somewhat decent is Gregory.

That’s considering that Gregory is on board with most of this the whole time but at least he tries to help Richard out when possible. It’s clear that he has more heart than the others. Finally you have Richard’s wife Anne who is trying to have a baby but it’s tough with all the constant stress. Naturally the kids go after her with some incriminating notes to get after Richard. It’s a shame that she didn’t reach out to Richard about it right away since it would have helped at least remove one trouble but it’s also too bad nobody noticed the kids heading to the mailbox each day.

At the end of the day I was on Anne’s side in terms of telling Richard to just get another job. This one’s clearly too dangerous and at times Richard was lucky to get away with his life. These weren’t just teen delinquents like in an old comedy film or something. These guys were straight up assaulting people in broad daylight and carried knives/were willing to murder. That’s a little far beyond the pale for a teacher to deal with.

I would where Blackboard Jungle falters is that it’s so dark it starts to get a little unrealistic. The rest of the town seems so nice but with crimes being committed on the regular it feels like the place would be quite a bit different. If you’re the cops why don’t you have someone around the school if things like this are happening every day? I guess if the teachers all act like Richard with refusing help then it’s easy to see why that would happen though.

Overall, Blackboard Jungle has the characters making horror movie type decisions which always put them in the worst spot possible. Working at the most dangerous school in the city? All right, time to get drunk out of your mind and then take a shortcut through an abandoned dark alley. First days on the job in a school of delinquents? Time to stay at school after class and seduce the main guy while nobody’s around. Receiving threatening calls and letters from someone? Don’t tell the cops and instead head to the crazy school all by yourself….the decisions just keep on coming right after the other. I would definitely say to just give this one a pass. If you want to watch a film about Teachers vs Rebellious students, watch Ferris Bueller’s Day Off instead.