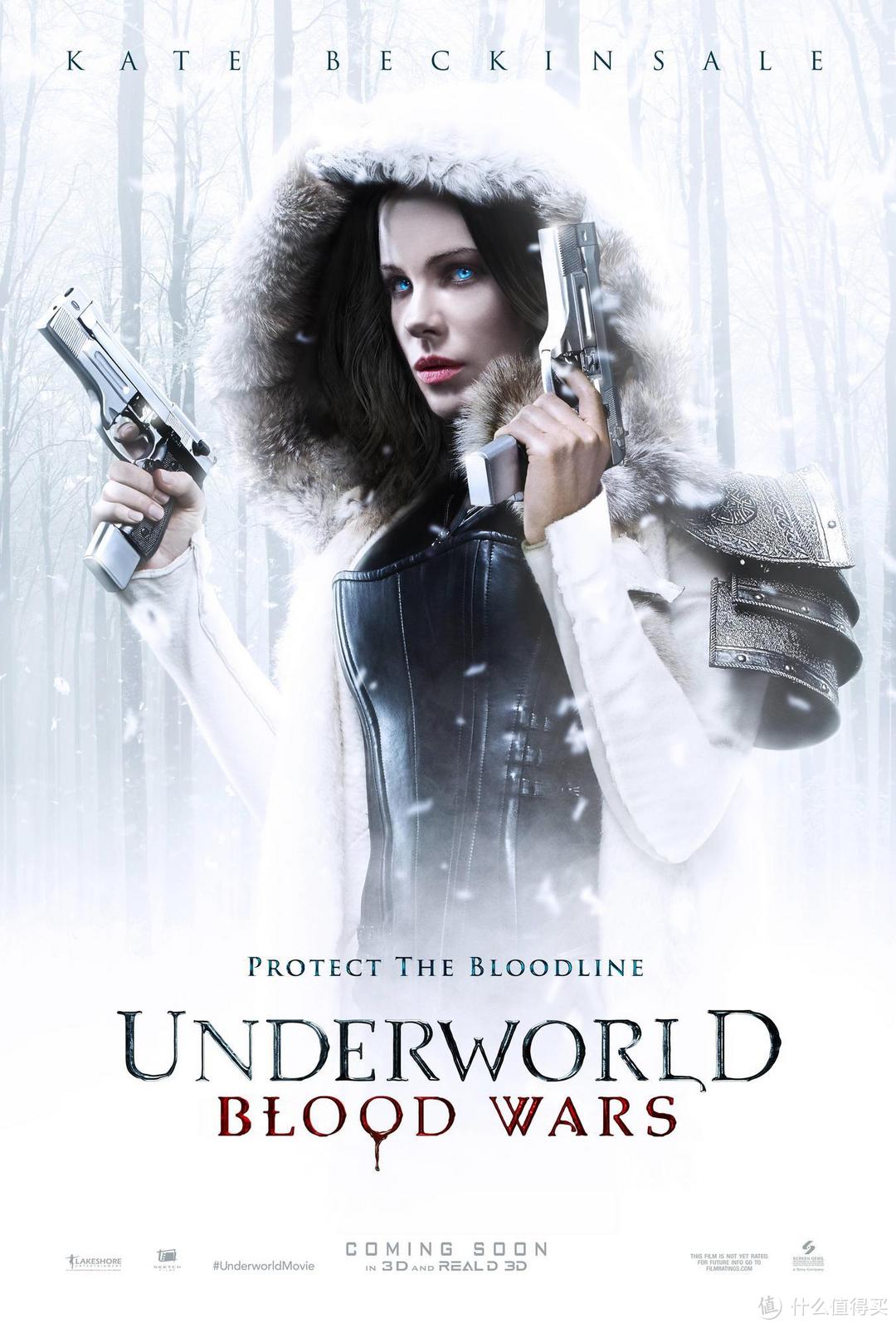 It’s the end of an era, I have made it to the final Underworld film. Blood Wars wraps things up although there’s enough still going where you could easily have many more sequels. Still, it’s fair to say that one side has basically claimed victory in the war at this point unless the government steps in again. They basically miss this film since to their view they’ve already won.

The movie starts with Selene on the run from a pack of wolves. She may be an elder powered vampire death dealer but she isn’t ready for a pack of normal wolves…..fortunately David steps in and she manages to keep her life. Additionally the villains only wanted to capture her. Selene has no time to dwell on how weak she has become because she’s very defensive at having to be alone again. Eve has been written out of the film and wants nothing to do with Selene anymore so now the heroine really has nobody left to turn too.

Meanwhile the vampires are once again on the brink of extinction. There are only two bases left and one’s very small so nobody cares about it. The other one is fairly powerful so they’re confident that nobody can break in. The issue is that the Lycans have a new leader, Marius. This guy will stop at nothing in order to destroy the vampires and wants Eve to accomplish this goal. Fortunately nobody knows where Eve is but the guy intends to take down Selene in order to find her. David’s father and one member of the cabal convince the council to pardon Selene so she can train their new recruits how to fight. Will this really allow them to claim victory?

It’s a pretty good premise and a nice way to bring the war back. My main issue is with Selene’s character regression. There’s no way someone of her power should be losing to random Lycan. Additionally, I thought the plot point of why she was separated from Eve to be very forced. There’s no logical reason to split up. The only difference is that now if Eve is found then there will be nobody to protect her. Sure, she will end up being the strongest vampire ever but being on your own is always risky regardless.

Underworld has had a very shaky history with power levels as it is though. As it stands you have Humans<Vampires<Lycans<Vampire Elders<Hybrids<Tri-Warriors in terms of overall battle potential. Physical strength-wise a human can never overpower a vampire and likewise as you go through the list. Eve is the only true tri-warrior here as she has everyone’s blood at this point. I would argue that Michael should count as well although the film seems to suggest he only counts as a Hybrid.

Despite this rather clear power structure, it doesn’t always play out like that. Selene’s power level seems to fluctuate the most to the point where she needed another power up in this film. It’s a great upgrade to be sure but it’s almost too good. Here’s the issue. She can now move with incredible speed to the point where even Quicksilver would be proud. Yet a lot of the time she forgets she has it and still takes a lot of hits. The worst part was when she started day dreaming about her times with Michaerl so the villain lands a 16 piece combo on her. He just keeps whacking away at her until she wakes up and ends the fight in an instant.

With her speed she could have taken out every Lycan warrior in an instant and prevented a lot of lives from being shed at the end. Her power was completely broken which is also tricky. You just know that if we get another film she will either be incredibly nerfed or will just get wrecked anyway. Needless to say it wasn’t her best film. In the last film she was resolute with her mission to murder anyone in her path and save Michael while here she seems to have just given up on everything and doesn’t even want to fight anymore.

She even gets punked by Varga, a random vampire with no enhancements. How could she let herself get stabbed like that? Yeah this was a rough film for her. I’d still say she’s a fun lead but one who has seen better days. David gets a fairly big role here as well. Now that he has some of Selene’s blood that means he no longer has to fear the daylight which is a really good power boost for him. He also gets to fight some important battles and is around a lot so he looks pretty good here.

Semira is one of the new villains for the film. One thing I can appreciate a lot about this installment as a final film is that there are just so many characters running around. You have Semira and her traitorous ambitions, the Lycans led by Marius, the corrupt council, and a vampire who is secretly working with Marius. There are so many traitors and subplots here that the film is always keeping you busy with something going on.

Back to Semira though, she worked rather well as a traitor. She had some decent plans even if they were a bit short sighted. With all of the trainees dead, how would she possibly stop the Lycan threat? Even if her plan succeeded that would just mean that the vampires are without their most powerful asset and would quickly be destroyed. Her abilities are impressive though as she was even able to take on an elder like Thomas.

Thomas looked good here. He was at least ready to help David and Selene even if he ultimately didn’t last too long in the 2 v 1. Considering that Semira was amped up I suppose that makes sense but I would have liked to have seen him dominate the two for a while longer. Varga’s more of a weak character though. I can’t take him seriously and the guy is always willing to debase himself when Semira is around. Even by the end it was far too late for him to go up.

Marius doesn’t really get a whole lot to do so I would say he has less character than Lucian. Still, he does make for a good leader as he keeps the Lycans united and reminds them not to quarrel among themselves. He was utterly crushing Selene during their fight though which felt like a bit much. This guy was that much stronger than her once he had Michael’s blood? Well, good show to him I suppose. Once Selene ascended into her godlike abilities by the end though then the tables turned pretty fast.

Finally, shoutout to Lena who looked really good. Considering that she is a normal vampire, her speed is incredible. The movie seemed to treat this part of the clan sort of like the Valkyries. They had mysterious powers and rituals allowing you to bypass death. Now she looks really impressive but it’s another thing that kind of breaks the power balance of the series since nobody should be hitting her with speed like that. Anyone who would try should just be crushed. My head canon is that there’s some kind of super strict time limit that seals your movements.

As a final film I wouldn’t say it’s the strongest one as it loses to films 1 and 4 but it beats films 2 and 3. Ultimately it’s a satisfying way to close things out even if it will leave you with some plot directions that make you shake your head. In the end Underworld has a long history that it can be proud of as getting 5 films isn’t easy. Now you’ve probably been waiting for the inevitable comparison to Resident Evil. Ultimately I would say that series won. Pretty much area by area Resident Evil is the stronger series. It’s fairly close I suppose but Resident Evil really tackled a lot of the same themes but just executed on them in a much stronger way.

As far as negatives for Blood Wars goes…you know the drill. We’ve got the usual super violence everywhere with characters even getting tortured. Fortunately Michael’s was mostly off screen as it definitely looked quite painful. You have a Mortal Kombat finishing move used at the end of the film which was pretty intense to be sure. The film doesn’t really have any romance this time around except for villains manipulating other villains. Those scenes are usually worth a cringe. Underworld has a good enough story where the films could really excel if they just got past these elements.

Of course if you want to make the films truly great you’d also just need to rework the story a bit. Vampires and Werewolves inevitably lead to blood sucking and eating their opponents. To get those elements out you would need to change the structure of the mythos a bit to make that unnecessary. It shouldn’t be all that hard to do though and it’s an easy way to boost the series.

Overall, This is the end for now. Hopefully the series gets more sequels soon since it’s always fun to have more installments. In the meantime though we can just assume that the status quo at the end didn’t change so we finally have a full winner in the war between the Vampires and the Lycan. I certainly had one side I supported from the start just because I’ve always thought them to be a lot stronger in the mythos. Still, both sides got their hits in and of course if they get out of control then the government will probably take them out again.