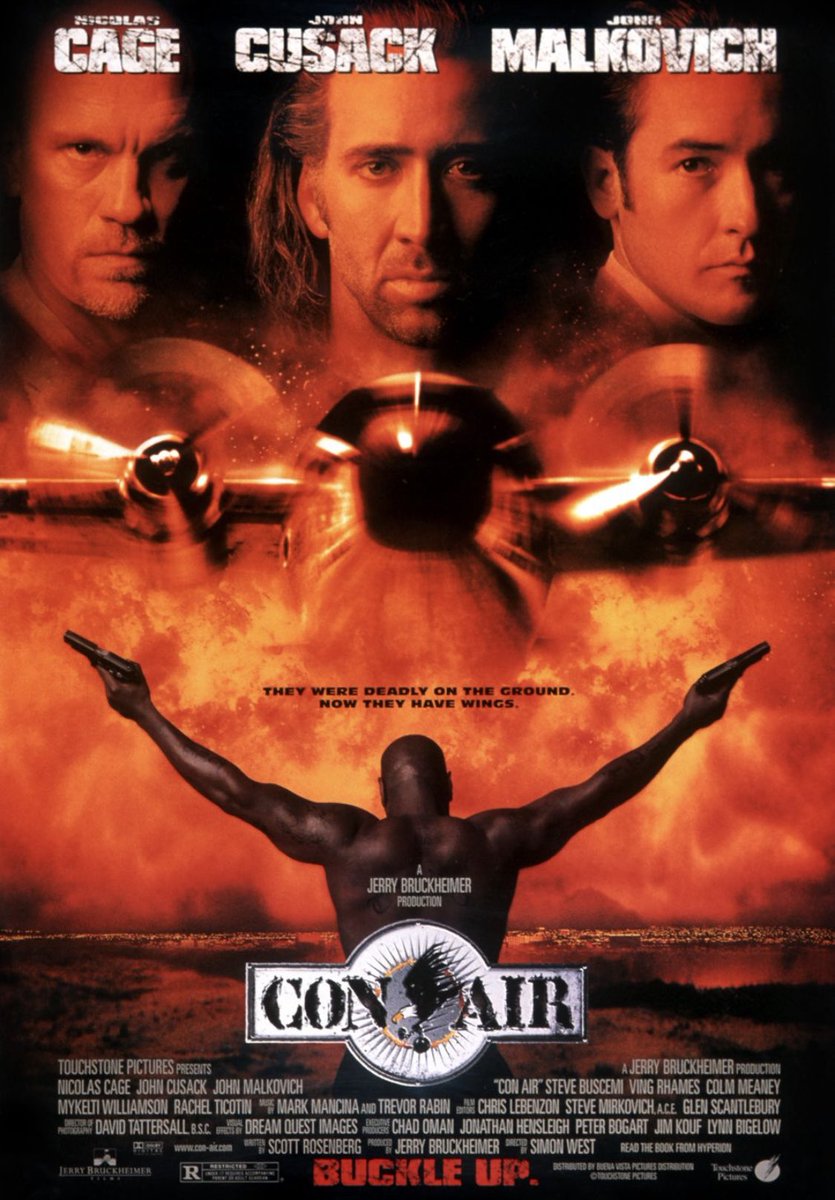 Con Air is one of those films where a whole lot has to go just perfect for the villains to even have a chance at kicking things off. While you will have to suspend some disbelief, I suppose the idea is that 99% of the time this fails so the film is about the one time that things do work out for them. It’s a good movie that I can’t help but feel could have been even better.

The movie starts with Cameron finally back home from the army and ready to have a good time with his wife and future kid. Unfortunately he is attacked by 3 hooligans and ends up murdering one of them in self defense. Despite this obviously being the only course of action available at the time, he is close to 10 years. Seriously? That definitely seems pretty iffy considering that his only other course of action would have been to die. Stopping these guys without accidentally murdering them would be incredibly difficult.

Well, the years pass and Cameron is finally about ready to be released. Unfortunately the government wants to save a few bucks so they’re going to put him on the jet that will be storing all of the max criminals on it. They don’t trust their own guys with any guns so there is only one that is located in the pilot room and some weapons on the basement level. All of the criminals are handcuffed so they figure that it’s all good. What could go wrong right?

Well, unfortunately the crew handles this really poorly. They let the criminals take control of the plane almost immediately and fall for every trick in the book. They’re overwhelmed with ease and now Cameron is stuck on the plane with these guys. He’s really trying to get home to his daughter before it’s too late but he knows that first he has a job to do. He can’t turn his back and let these criminals go free.

Initially I thought this might be a film where Cameron is knocking off the criminals one by one to thin out the herd before making his move. Instead it’s more about lying low and trying to get word out to the proper authorities. Of course, Cameron does do his share of big damage by taking out several of his opponents.

Cameron’s definitely a great main character. At the end of the day he’s a hero who does his best to try and save the day even when it would have been easier to leave. Especially once one of the prisoners ends up getting really sick because he needs his insulin shot. Cameron won’t leave without helping him out and it’s lucky for the heroes since they would have been absolutely doomed without him.

As a side note, the accent may be trying a little too hard but it’s fun. Half the time it just felt like Cameron was being sarcastic to everyone rather than him actually having the accent. This kind of action hero just doesn’t get old and since we had the intro scene as a way to know just how tough he is, it’s not surprising when Cameron keeps on taking his opponents down.

Of course a lot of these guys are absolutely terrible characters. It may be expected and even intentional since they’re villains but it immediately lowers the odds of good character banter. You’ve got Johnny who is just a disgraceful character. Any scene with him is painful. You’ve got Pinball who doesn’t have much personality beyond the fact that he definitely wasted too much time chatting which cost him big time. Earl doesn’t show up until the second half but I suppose he was a lot more interesting than some of the other villains. The fact that he could pilot the ship was also very convenient. Without him there the villains would have been in for a tougher time.

The main villain here would be Cyrus. He’s the leader of the crew and the one who comes up with the big plan. The other villains definitely fear him as he has quite the reputation. That said, at this point it’s not like any of them are master fighters or anything so I wouldn’t necessarily say that any of the villains look all that tough. Cyrus talks tough but that’s about it. Same with Diamond Dog. The whole time you’re waiting for him to do something or attack Cyrus but it doesn’t really play out that way.

The villain who got the most hype throughout the film was a guy called Garland. He’s supposed to be the worst of the worst which is where the film builds some of its tension from. I would have cut him out entirely though. Most of his scenes are to build up some tension as we know what a bad guy he is and then he finds a kid unattended. The film knows exactly what it’s doing with all the long drawn out shots with these two characters and it definitely needed to tread carefully.

I have to say if anything happened to the kid the film was going to lose major stars because it’s just such an unnecessarily dark avenue to go down. It’s no exaggeration to say that the film avoided utter disaster by not having things go badly there. Still, there’s no reason to have Garland around so I would have definitely cut him off the team.

As for the other humans, well you’ve got Duncan who handled everything really badly. The guy is an agent who was sent on board to try and get some intel out of one of the prisoners. The whole idea was extremely suspect from the start though and it’s hard to picture it working. Still, the guy has a gun so he should be ready but he takes it out immediately and then panics. Look, in this situation where you’re effectively surrounded you have to use the gun if you take it out. There’s no time to play chicken or talk tough with the villains.

This guy didn’t feel very professional. Vince is his boss and that guy’s pretty entertaining. He’s certainly very eager to always blow stuff up but I suppose that strategy has worked out well for him thus far. He gets into a lot of arguments with Mike on how to handle things so expect a lot of banter there. Those are some of the more enjoyable parts of the movie though so it was good to see them. Neither one of them were particularly impressive though and didn’t help much.

Cameron’s really on his own here no matter how you slice it. The film has a lot of solid action and get ready for a ton of explosions. You’ll be feeling bad for the army the whole time though as it seems like they really can’t catch a break here. The villains are blowing up their cars left and right. I like to think that proper military strategy is never this awful in real life because in films it makes the strategist look awful.

The military literally walks in a straight line to where the villains are. Naturally they keep getting blown up and picked off. Surely someone would have said that this was a bad idea right? So it’s not a case of the villains looking smart but the heroes just looking terrible. There has to be a better way to assault a heavily armed villain base than to walk in a straight line like that.

Overall, Con Air is definitely an intense film. It’s got a good hero and good writing to keep it on the positive path. It would have been nice if the villains weren’t all so edgy the whole time though. The only decent one appeared to be Mike. Now, this is a bunch of max prison offenders so of course they would be the worst of the worst but it’d be nice if they at least acted normal at times. Instead you just keep agreeing with Cameron’s one liners about how this was an awful plan from the start. Once he gets on the plane there aren’t really many times for breaks so get ready for a whole lot of action scenes. If you want a pretty entertaining film about hijacking then this is a good one to check out.