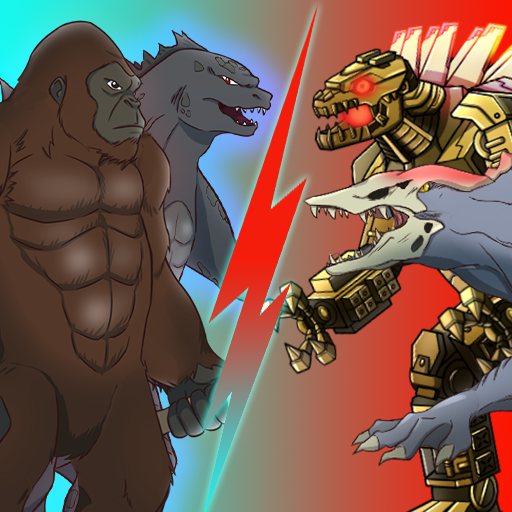 Over the years there have been quite a few Godzilla app games. One of them was really quite great while a lot of the others have been fairly mid to even awful. Unfortunately this one’s not very good either. It definitely does beat some of the others I’ve played but it’s weighed down by constant ads and glitches. Not exactly the mobile atmosphere you were hoping for. I’ll give the developers credit for actually getting this published though because it does not look official in the slightest.

The game has 2 real modes, Arcade Mode and Survival Mode. Survival puts you in nonstop matches against monsters while Arcade mode is sets of 3 rounds. When you clear them all you’ve completed the first level, then rinse and repeat as you go through. The game only has a small handful of monsters so expect to be fighting them over and over again. You have King Kong, Godzilla, Mecha Godzilla, the Skullcrawlers, and some jello thing. That’s it, so each level you will see one of these guys.

As for the gameplay, it’s a 2D brawler. You move the character by tapping on the screen and then you can use a few moves. You have the close quarters combat attack which is what you will mainly be using. If you wait a bit, your special meter will charge and then you can fire your ultimate attack which does a good deal of damage. The final button lets you jump but there’s no scenario where that is even slightly helpful so you don’t need to bother using it.

There’s not much point to playing Survival mode but I made it through around 10 rounds to be safe. You get money to level up your characters so that’s a start. Arcade Mode is where you feel like there is at least some progression. I think there are 60 sets available in the game currently so clearing all of those should take some time. The main issue is that after playing 1 set you will already have seen exactly what the game has in store for you. It’s not a very elaborate title.

Now that’s not a bad thing per say but the game also feels very low budget. It crashes quite a bit and sometimes the icons will disappear from the game. You won’t be able to see your level or attack meters so you have to hope for the best. It doesn’t look like the game was formatted all that well to the screen size so some things will usually get cut off. That’s all the tip of the iceberg though. I could get around that but not the next part.

After each set you have to watch an unskippable commercial for another app game. This is also true if you click the wrong button after finishing a survival mode or when trying to navigate the menus. If this happens you have to either wait or just close the app and re-open. The game feels incredibly greedy with how frequent the ads are. The ads should be something you watch as a bonus but not something you have to watch. That’s an easy way to take someone out of the game immediately. Ads have no place being an intrusive mechanic when you’re just trying to play for a bit.

That alone meant that this game wasn’t going to get a positive score. Still, it had help from all the other aspects of the game being underwhelming. Just take a look at the graphics, it’s not that good. I’ll give them credit for the drawings I suppose as someone probably had to work on those characters models but it doesn’t look nearly as good and detailed as it should. The lack of content is also quite telling since the game has to throw a bunch of levels in just to inflate the count.

There are no good themes to listen to hear so you can forget about that. The menu says there is a Story Mode coming soon but I have serious doubts on that. It’s one of those “I’ll believe it when I see it” kind of things. Not that I’ll have the game still downloaded on my phone by the time this review pops up though. Space isn’t exactly unlimited so these games get the boot as soon as I’m done. The only nice thing about the ads was I found another Godzilla ripoff game so I’ll be checking that one at some point.

What does the game do well? Well, I suppose the actual combat gameplay is really not that bad. It actually has some reasonable mechanics to it even if it’s extremely basic. Like I said earlier, I could get behind this if you just take away all of the negative aspects. Then you would really have something here. Maybe if they worked on it another year or so to add content before throwing it in the app store then I’d be singing a different tune.

Overall, As it stands there just isn’t anything to really keep me here. A story mode of some kind would have really helped. There isn’t a lot of replay value and earning coins seems like a long process from what I got so far so unlocking the other characters without paying the big bucks would take way more of an investment then I was planning to give. If you want to play a Godzilla mobile game definitely give this one a pass.