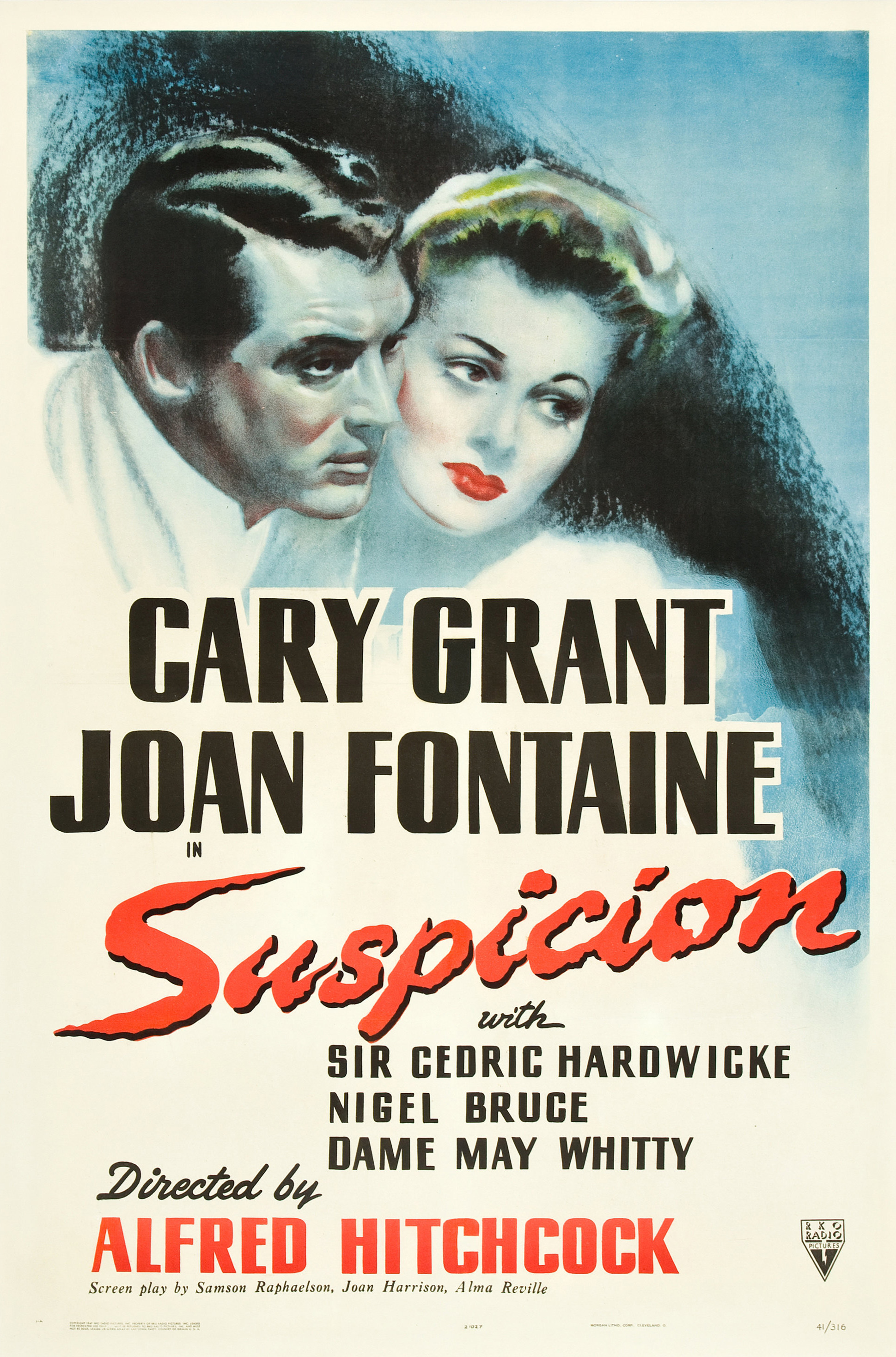 Suspicion is a good reminder that you never want to take things too quickly. If you meet someone you probably shouldn’t get married the next week because you still don’t truly know the person. You have to give yourself some time or else you’ll be starring in your own Hitchcock thriller as you get stressed out at all times.

The movie starts with a drunk Johnnie getting on a train. Unfortunately he went to the first class section despite only having a third class ticket. He manages to save himself from disaster by snatching a stamp from the girl sitting across from him. Her name is Lina and while she wasn’t thrilled about this, she allows it to happen. She figures they’ll never meet again at least.

Unfortunately their paths do cross again. Johnnie convinces her to skip Church which shows what kind of example he is setting already and teases/insults her a bunch. She finds this charming though but then he vanishes again. She waits a while and eventually he turns up and asks her to marry him. She agrees…of course. Well, now things should be on the up and up but after they’re married he drops the biggest bombshell. He is broke without a penny to his name. He hopes they can live off of her inheritance but she explains that it still won’t be enough to afford this big house.

Their marriage continues to get bumpier and bumpier as she finds out that he has been lying about everything. He sells her chairs without permission, goes gambling and even steals some money. All of these acts add up but Lina decides to allow them because she’ll allow just about anything. The only issue is…she begins to think that he may be out to murder her. Can Lina escape this situation?

Suspicion does a good job of gradually raising the stakes throughout the film. At first Johnnie is just a playful bully who messes with her hair. Gradually he moves on to breaking and entering, but he does it in a charismatic way where it’s supposed to be quirky as opposed to dangerous. Then he starts lying constantly but each time it is seemingly to Lina’s benefit in the end or so he claims. Then we go to theft and that’s starting to get more serious. Even the cops may have to show up. Finally when you reach the murder tier, it looks insane that Lina is still around but because this all happened gradually, to her it never felt like a sudden rise.

As with many Hitchcock films there is also a lot that is left to your imagination here. You can really read the ending in a two main ways and a lot of sub paths from that branch. The first is that Johnnie is still lying. Certain incidents to which he should not have had a part in involving brandy and a sudden accident would have been his doings. If this is the path you believe happened then he is definitely an extremely dangerous character and Lina is not out of the woods.

If you’re on the second path and do think he was at least genuine at the end then that means Lina isn’t in danger and Johnnie at least had some lines he wouldn’t cross. I’m inclined to believe the second path is what happened, it at least feels that way but I dunno. I wouldn’t say it with a lot of confidence, it’s my pick but you could make rather strong cases for both. Naturally it would change the atmosphere of the ending. If Hitchcock wanted to make it obvious the final scene would be Johnnie offering Lina a glass of milk but that would be rather on the nose.

Suspicion’s greatest strength is how engaging the story is. The extra details also give it a good amount of replay value. There’s a lot to think about here. The writing is good as always and the movie is reasonably long so a lot of things get to happen during the run time. Nothing is rushed in the slightest and the ending is satisfying either way.

It’s a credit to the film that it succeeded despite my not liking either of the two protagonists. I didn’t like Lina because she gets pushed around way too easily. She fell in love with Johnnie right away but it’s hard to see how since both of her first impressions with him weren’t great. In the first he basically steals money from her and in the next he tricks her out of not going to Church and then tries to pull a fast one on her in the garden. He suckers her so many times and she doesn’t seem to care.

She even gets upset at Beaky despite his story making complete sense the whole time. I didn’t like the way she handled some of these moments that’s for sure. Then we have Johnnie as the lead. Well, there’s not much to like about him. He’s a playboy who’s apparently been in numerous affairs already. He is completely untrustworthy and you can’t have a true relationship without trust. It just doesn’t work and would always be doomed to fail.

The whole reason why Lina gets these suspicions about Johnnie is because she knows that she can’t trust him. He is directly responsible for every bad thing that happens in the film. There’s just no excusing the lying all the time. Selling the chairs without telling Lina was also really bad since she kept explaining that they were family heirlooms and could not be replaced. Then you have his whole stealing 2000 pounds from his employer. The list goes on and on and he gets rather terse with Lina for no good reason.

So in a way both main characters made quite the match here but I really didn’t like either one of them. The only good character here was Beaky. He added a lot of fun to the adventure and kept the characters on their toes. He was not smart in the slightest though considering his allergy to drinking. A single sip causes him to have seizures to the point where he nearly dies. In that case why does he continue to drink? You’d think that he would give it a rest then and not put himself in those situations. It’s a shame that he didn’t think things through.

Overall, Suspicion is definitely a very solid film. I would certainly recommend checking it out and see how you interpret the ending. There’s a lot to think about so pay attention to each detail as this goes through to the end. You may find it hard to like or sympathize with the two main characters but just hang in there until Beaky arrives and he shows them what’s up.