This review is of the edited TV-14 version of the film. All thoughts below should be addressed as such as an unedited version would be more negative 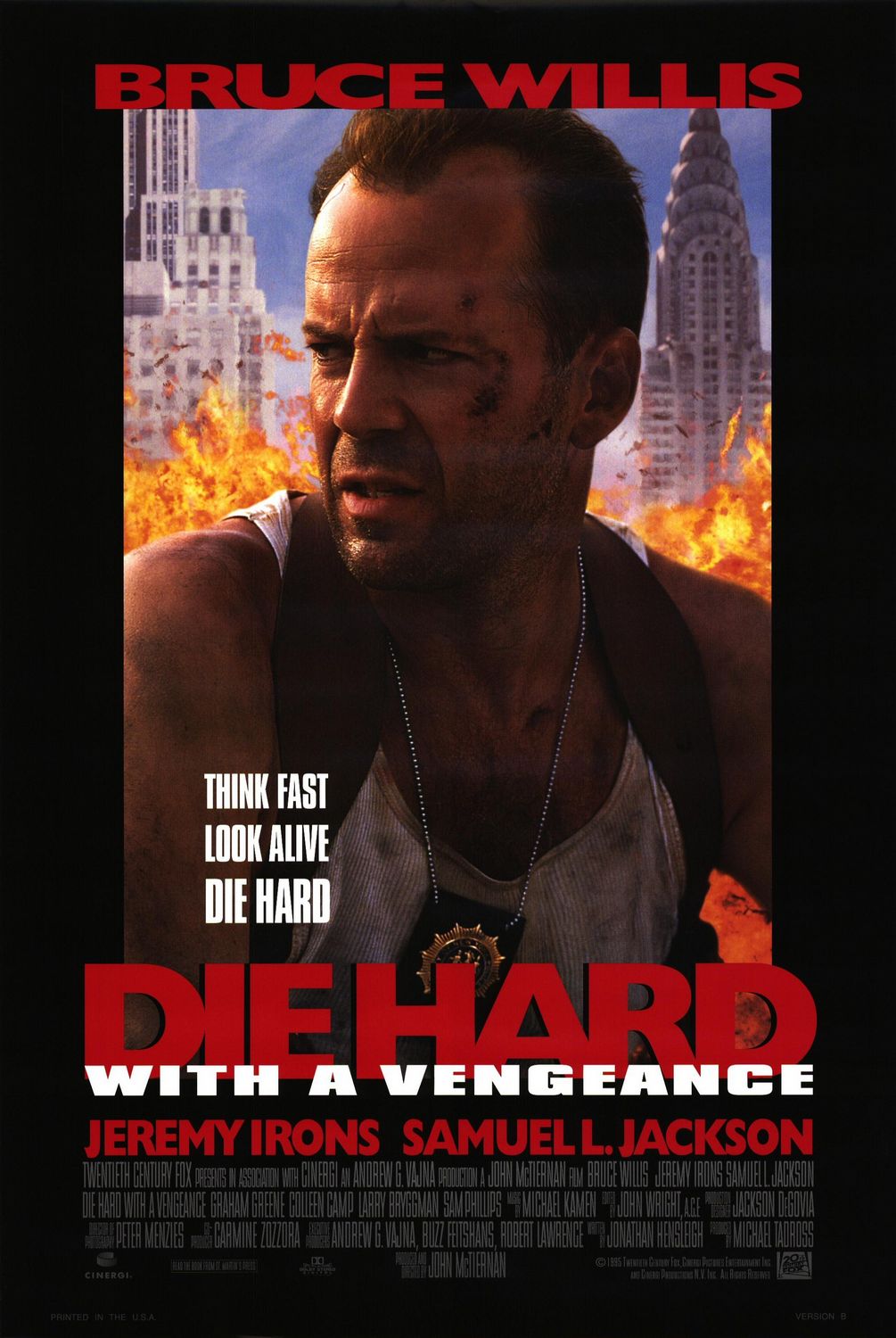 Die Hard returns for the third film in the series. This one takes things in a different direction as the first two were complete action thrillers while this one is more of a series of runarounds. The villain loves messing with the heroes and so we don’t have time for a true confrontation until near the very end of the film. It loses sight of the franchise’s normal goal but is an okay film.

We open with a bomb going off and a mysterious guy named Simon calling the cops. He explains that unless John McClane shows up to Harlem wearing a sign with the offensive language, he will blow up more bombs. The police figure they need to comply with this request or more people will die. John realizes this is a suicide mission so he also takes a gun with him. Fortunately a guy called Zeus shows up and they manage to just barely escape with their lives. Simon doesn’t like this so he decides that now both of them have to follow all of the missions. This ranges from solving math equations to catching trains on time. Can the heroes complete all of the missions? The tough thing they also have to wrestle with is that there may not be an end to the missions. They just have to keep on complying and hopefully things will go well.

In a film like this you can see how that’s the most frustrating part for the heroes. The villain has all of the leverage at the moment. He has bombs everywhere and there are no leads onw here he really is. As a result he can just keep having the heroes go on various missions all day until one finishes them off. If the heroes are a minute too slow then one of the bombs will go off after all. Sure, Simon loses some leverage but he has enough extra bombs where it won’t make a difference.

It’s a never ending story and that’s why it can feel futile. It’s why I say if you are ever held at gun point and told to get in a car, just make a break for it or try to tackle the guy. What’s he gonna do..shoot you? He’s going to that or worse if you get in the car anyway so you might as well take your chances. Now in Die Hard 3 it’s a little more complicated since the bombs will be affecting a lot of innocent people. So John and Zeus are doing the right thing in complying with the missions but you wish they would get some real backup at the same time. It just doesn’t feel like they are making any real headway throughout the film.

The individual challenges are okay. They’re not as thrilling as they could be but it’s fun to see the city and the shortcuts that are used to get to each destination. One puzzle was also like something directly out of Professor Layton with the characters having to measure to containers and try to get the right amount of liquid into one of them when one container is too large and the other is too small. It’s definitely a tough puzzle to solve under any circumstance, much less when your lives are in danger.

As for the main characters, the banter between them isn’t nearly as good as most buddy cop kind of films. Zeus is a guy with a big chip on his shoulder and he’s constantly playing the race card and trying to bait John. Then you have John who doesn’t really care about this and tries to reason with Zeus as he would anyone else but to get around the tough talk he lies a few times as well. Things end up blowing up from both characters but by the end they get along well enough. It just doesn’t make for nearly as entertaining a dynamic as most films in this genre though.

Zeus gets better by the end but I wouldn’t say I was really a fan. He does step up and do the right thing when needed but it does take a while. John’s good as always even if his plan is ultimately pretty risky. At one point he decides to just forget the mission and try to capture the villains but when they’ve made it clear that they have cameras on 24/7, isn’t that basically just sacrificing all of the hostages? Things work out with a little plot armor at the ready but just running off was never an option. When he decides to take this route it’s treated as a big deal but it just doesn’t seem like it would work.

It reminds me of the classic situation where a villain says “Don’t move” while holding a hostage and the hero moves anyway. If it works out then I guess that’s good but hindsight doesn’t make it a great decision. At least it does give us a proper climax with some fights and everything though. It’s what you’ve been waiting for the entire film so it does end things on a high note.

As always John is having some difficulties with his wife Holly again. This almost feels like a running gag in the films at this point. No matter how often they patch things up it just doesn’t work out. If things still aren’t working out by now I don’t see it changing but we’ll see if this gets brought up in the 4th film as well.

The effects are on point as expected. While the heroes getting foiled at every turn and having to repeat the tasks may get a bit repetitive, I’d say the pacing of the movie is on point. Simon’s an okay villain. He may not stand out a lot but he had a good plan at the end and almost came out on top. If he didn’t make a James Bond type speech and choose to let the heroes live near the end he really may have gotten away with everything. At the end of the day his own overconfidence was his down fall.

Overall, Die Hard With A Vengeance will get lost among the many action films out there. It just feels like it’s lacking in action despite that being the genre. Technically a lot of the chase scenes and such would be considered action but you won’t get the hand to hand/shooting matches that you had in the first two films. The banter with Zeus and John also tends to be more on the annoying side compared to entertaining. It seemed like they really didn’t like each other compared to most where they talk tough but still have each other’s back. I’d say you can give this one a skip but if you want to see more of John McClane’s adventures then you may as well check it out.