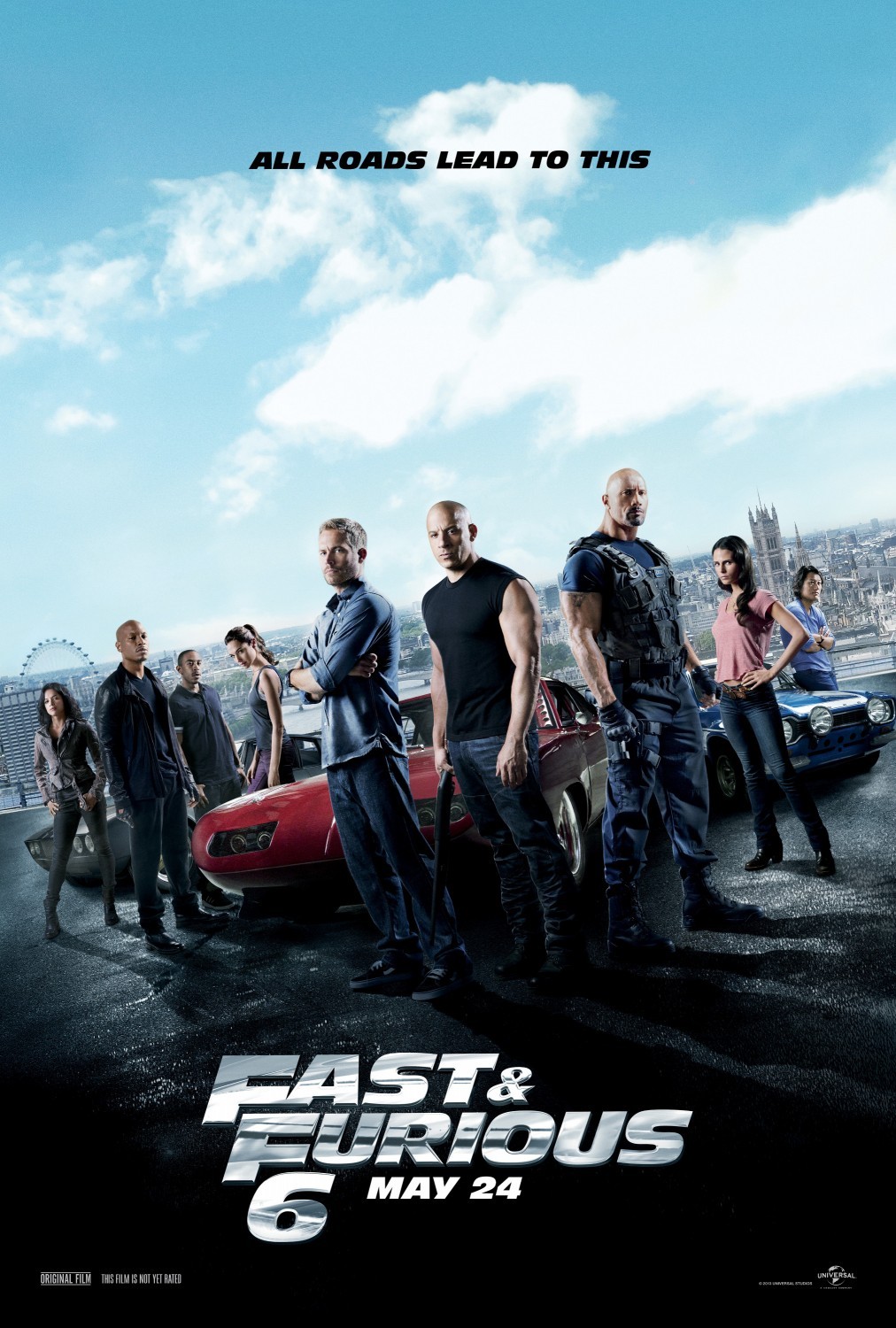 The ride must go on. Fast Five ended up being my favorite title in the series but little did I suspect that it would get surpassed so quickly. 6 takes everything I liked in the 5th film and then adds on to it. We get a lot of great fight scenes and character moments here. The series holds onto its strong family values and makes it across the finish line in record time.

The movie starts out with Hobbs realizing that he’s up against a villain group that can’t be taken down easily. Usually he doesn’t need any help but this time is an exception. He grabs some intel from one of the villains pretty easily and then sets about recruiting Dom and the old gang for one last ride.

Dom and friends are all millionaires who are having fun around the globe so it may seem hard to recruit them right? Well, not when you have the right ace up your sleeve and Hobbs has a doozy. See, there’s a photo of Dom’s old wife Letty around and it seems like she’s riding with the villains. That should be impossible since she is dead but if there’s even the slightest chance that she is still alive, Dom can’t waste it. He quickly agrees to help. Still, can these heroes stop this new villain group or are they simply outmatched here?

One thing I really liked here was how quickly everyone dropped what they were doing to help Dom. It shows that the money didn’t change them. They’re still a very close knit group and show up when the call goes out. Dom doesn’t have to talk to them for more than an instant to get them on his side. There’s no complaining, whining, or any of that. They’re just ready for action no matter what it takes.

It keeps on reinforcing the family aspect of the series. Dom always explains that these guys are his family and you don’t give up on family. You help out whenever you can with no second doubts. It’s hard to think of any series where the main characters have such a close bond. It’s just nice to see and immediately puts the film in a good spot so far as knowing who to root for and getting you personally engaged in the fight.

As always Dom is a great character here. He really doesn’t waver and hasn’t gotten sloppy in his driving skills. It’s safe to say that the film still portrays him as the best racer in the series. You could maybe make a case for Brian matching him but under pressure you want Dom on your side at all times. When the chips are down he won’t fail. The guy is also the better hand to hand fighter. Dom is a natural leader and just doesn’t back down. One of the more impressive scenes is when he’s face to face with Shaw and doesn’t even flinch when a gun is pointed at him.

Brian has his own subplot here where he breaks into a jail to try and find out what happened to Letty. Ultimately he doesn’t learn a whole lot to the point where he comes back and Dom doesn’t even want to hear what he learned. That said, it was a huge risk and Brian proved that he was willing to do whatever it took to find her again. He also proved himself in a fight as he took on several opponents at once.

Brian’s always been a fun character. He gets overshadowed by Dom but I like the guy and it’ll be sad once he’s gone. His wife Mia doesn’t get to appear much this time around but she encourages Brian to help the team out. She’s still a team player for sure. Elena also doesn’t do much here but you can pretty much see why. With Letty back on the table you can basically confirm that her romance with Dom can’t last.

It’s why I was never on board with that romance either way. It seemed like a rebound no matter how you slice it. Letty would certainly have good reason to be upset about this as well although everyone takes it in stride. Hopefully Elena returns and we can see her in more of an action setting next time.

Of course Hobbs has a big role as you’d expect. He sets the tone right away with how he beat up one of the minions in the interrogation room. That was pretty impressive and it showed that he is just as obsessed as ever with bringing crooks down. He may be a lot more by the book compared to Dom’s crew but he’s willing to be flexible. He has a pretty fun scene with Tej when they have to round up some cars. Most importantly, Hobbs can still fight and comes in clutch during the climax of the film with the 2 vs 2. As a driver he’s slightly below Dom’s crew but holds his own surprisingly well considering that isn’t really his thing.

His new teammate in this film is Riley. She’s pretty solid and gave us the first big fight scene of the film against Letty. I would have to say that was one of the better fights in the movie, there was a ton of back and forth there. It’s definitely not The best fight of course since the climax threw in some big ones but it was a blast. Riley’s also no nonsense and can fight really well. She also knows how to take a hit and keep on going. She left an excellent first impression and always leaves the opponents guessing.

Tej is pretty good at getting the cars set up and planning things out as always. He may not get quite as much to do as some of the other characters but always has good banter with Roman. Likewise, Roman is a pretty charismatic guy. Not all of his jokes land but he does have a lot of fun moments. His lack of fighting skills do get exposed at one point but he does keep getting up so you can’t doubt his determination.

Han may not get a big role during the film but it’s certainly a memorable one. He’s always got a lot of confidence in Gisele and lets her do her own thing. When she moves in on a villain he just moves onto the next one because he knows she has this covered. Gisele does well with her gun and consistently makes accurate shots from long range. She has to be the best shooter on the team by far.

Then of course you have Letty. She isn’t quite herself during the film due to some memory loss. Of course you’ll be wondering how she survived. The film explains how this happened which will answer any questions on that. It doesn’t really make sense why someone did something which allowed her to live though. She makes for a good antagonist and definitely has a lot of fighting skills. I can see a lot of potential for battles in future films as a result. She has a solid character arc.

As for Shaw, he’s a solid main villain. After watching the trailer for Hobbs & Shaw the whole time though I was waiting for a certain twist that never happened. It makes the experience pretty unique to be sure but he still stands up well as a villain in his own right. He can’t fight but is a smart villain who plans for every contingency. The heroes never make a move without him being ready for it. His futuristic cars were also impressive both in how fast they were and also for their raw strength.

The rest of his villain group wasn’t too memorable though. The one who gave Roman and Han a good fight was impressive but good luck remembering his name. The rest of the group doesn’t get a whole lot of dialogue or anything beyond their initial scene though. It is cool that the film set them up as a dark version of the main characters though. They may not have had a proper team fight but it was still cool.

The battle scenes are the best that they’ve been. My favorite fight out of all the films is probably Hobbs vs Dom from Fast Five but this one just has many fights on that level back to back. There is a lot of nonstop action here so something is always going on. You’ve got different climaxes and high tension moments with both sides making move after move. It’s all extremely entertaining and also high quality. This is definitely what you would expect from the series.

The only weakness I would say the series has is the never ending fanservice. As always whenever the heroes go for a rare drive you’ve got everyone dancing on the cars or walking right into the camera. It’d be nice if the films could tone down this aspect and just focus on the fights. It’s not as heavy as in other titles though and the positives still outweigh this negative to a pretty high degree so it shouldn’t hurt your enjoyment of the title.

The writing is on point and has a lot of good humor moments throughout. The film is fairly long and since it has a fast pace that means you can expect a whole lot of adventures here. Fast & Furious 6 just keeps you on the edge of your seat throughout. It’s sort of like the non comic book version of the Avengers (2012) in terms of tone and action. Things even get pretty serious by the end as the film actually does have a body count. While the movies always end on a high note, the gang certainly goes through their share of trials. The soundtrack is also on point. The series always has a lot of different tunes that bring a lot of energy to each scene.

Finally, we can’t miss talking about the end credits scene. This was pretty hype and I always believe you should end your film with a cliffhanger like this one. It’s probably the most hype end scene since Tokyo Drift. We see an event from that film in a new light. Turns out that what happened to Han was a lot more personal than expected. It may be a retroactive change but it’s a solid way to make Tokyo Drift even more important all of a sudden. The new villain is also immediately going to be one of the better FF villains. You can tell from this scene that he means business.

Overall, Fast & Furious 6 was very impressive. This one is going to be extremely tough to defeat but I look forward to seeing how good 7 is. We’ve still got the full cast here so I am expecting it to be pretty good. I wonder if Brian will get a bit of a power up to keep up with Dom and Hobbs or if he will still mostly be more of a support fighter. With that stinger at the end you definitely know that 7 is about to get personal. Dom’s family will need to be ready to meet this challenge.