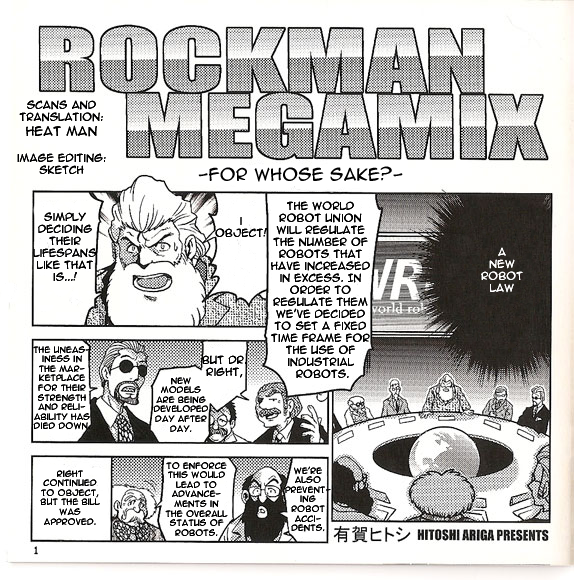 This is a very quick one shot but an interesting one without a doubt. It serves as a prequel to Mega Man 9 and shows why a lot of robots are upset. For once it isn’t that they are being manipulated by Wily or anything like that. At 16 pages it can only give us the general premise but it makes the heroes look shifty. So the government has passed a new law that the robots all must lose their individuality. Additionally, they will be given an expiration date at which point they will no longer function. Additionally they will be personally dismantling a lot of the older robots.

A lot of the robots have already been burned and destroyed so various robot masters from the original games have decided to fight against this. They pick up their blasters and basically jump into action. Dr. Light is arrested as well since a lot of these robots used to be his so the government figures he is an easy target. Light even tells Mega Man not to interfere since he shouldn’t fight for the humans anymore. Mega Man doesn’t agree and the one shot ends with him about to jump in.

The government are definitely the villains in this story. The fact that they want to just dismantle all of the robots just like that is crazy. These aren’t some random robots without emotions or anything. These are robots that are top of the line and have demonstrated a lot of unique personalities. In fact, that’s pretty much why the law was in effect so the government is trying to stamp out all of these robots just like that? It’s definitely a little concerning to say the least.

This also isn’t Dr. Light’s best look. I’m usually not a big fan of the guy but at least he is usually trying to be reasonable. Not here. Telling Mega Man to stay out of the fight is really counter productive since the robots are going to need him at the ready. Additionally he seems to be saying that the humans aren’t worth fighting for and that’s really a jump. Yes, don’t fight for these humans but Mega Man still has a job to do. Ideally I would like to see him jump in and help the Robots that are about to be dismantled.

They definitely look like the antagonists here but they’re just fighting for their right to survive. It is cool to see some of the older robot masters going up against the new ones but Mega Man should be helping them out in order to balance out the scales as well as defend their rights. I feel like Mega Man would absolutely be on their side in this battle. It just doesn’t feel right that he would oppose them. There are only a few pages here but I’d also like to see if there is more reason behind the law coming out now as opposed to the humans just being super scared as normal. I wouldn’t be surprised if that is it though.

The art here looks really good. The artist definitely has a great feel for how Mega Man is drawn by this point and all of the illustrations are clear. It makes this one shot really easy to read as you blast through to the end. If it ever got a full adaption that would be great since Mega Man 9 wasn’t exactly filled with story content. So developing it through a manga would really be ideal. Cossack and Wily are also around so it would be interesting to have the 3 of them there. Have Bass and Proto Man show up as well. They certainly wouldn’t want to be destroyed either but if the government is smart they would be put on the Exempt list along with Mega Man, Cut Man, and a few others.

Overall, For Whose Sake is a very interesting Mega Man story. Even from the title you can see how the story will test on whose side you’re on. The robots trying to survive or the government trying to destroy them? Complicating matters is that the Robots have started attacking cities in retaliation after finding out that thousands of them have already been destroyed. Once things escalate to violence it’s hard to turn back. Regardless, if you’re a Mega Man fan then you definitely will want to check this one out.