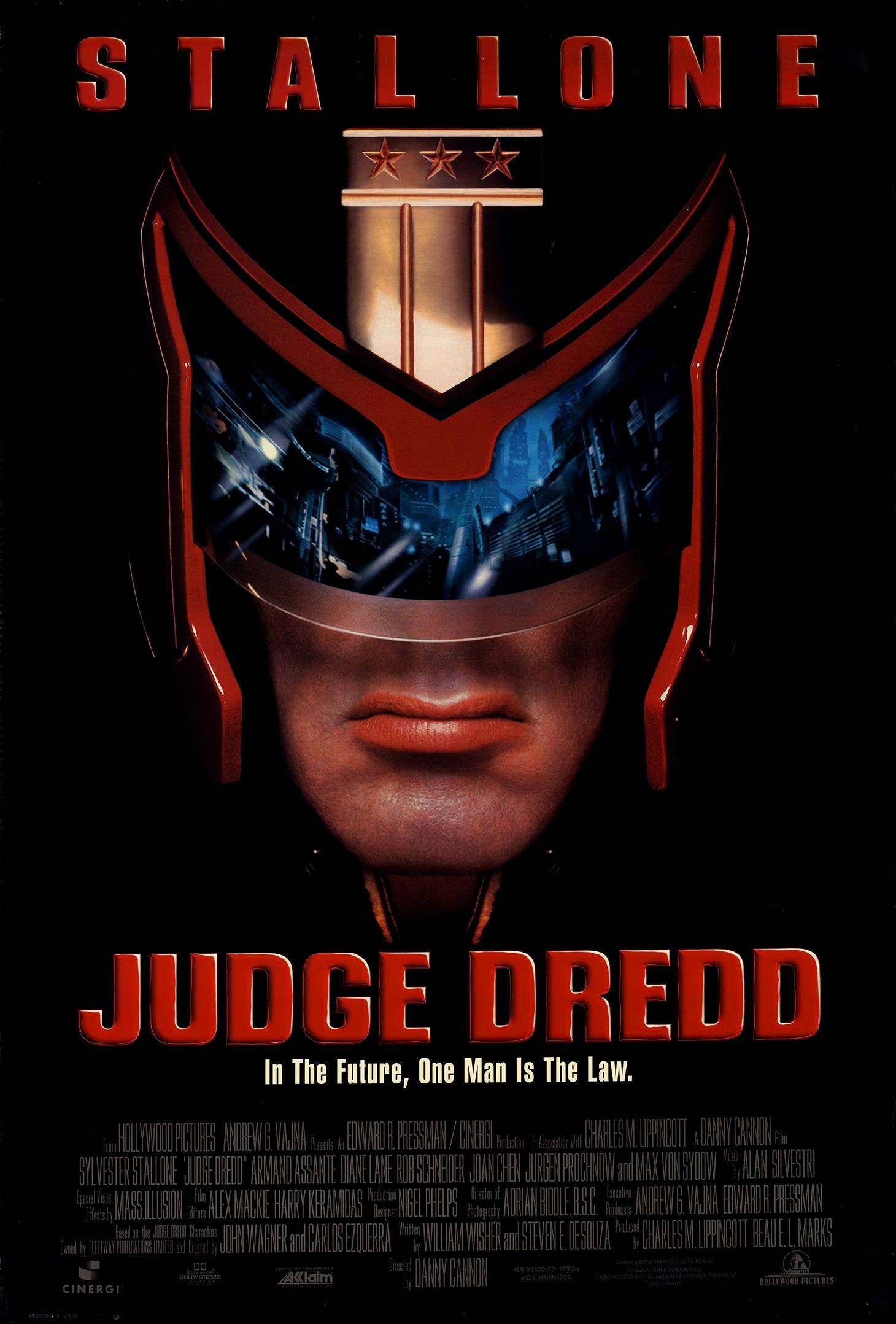 Judge Dredd always had a pretty interesting setting. To an extent it’s sort of like what would happen if Gotham City didn’t have Batman and had to exist that way for another 50-100 years. By the time we did get a true crime fighter then the place would probably be too far gone to actually be saved. That’s the kind of environment the film takes place in and it actually works rather well. The film does a really good job on the effects.

The movie starts by showing us another gang war in the streets. Fergie got roped into this by being in the wrong place at the wrong time. So when Judge Dredd shows up and takes everyone down, Fergie is sent off to jail as well. See, there’s no court system or anything like that (Unless you are a Judge) so if you’re taken in by the law that’s game over. Gone are all of those legal establishments. In this distant future, the Judges serve as jury and executioner. What they say will go and so the world is perpetually unhappy and in a lot of inner wars.

To really illustrate the kind of place this is, the first scene has everyone using giant blasters. Given how unsurprised everyone is, you also see how this is a fairly regular occurrence. You’re either able to try and stay out of the spotlight or you better have good gun skills because it’s game over otherwise. There’s an opening message at the beginning of the film that explains the lore a bit as well.

Then you have the city backdrop which is really nice. Mix that in with the cool sci-fi guns that are coded to your DNA and the effects team should definitely be given a thumbs up here. It’s all aged rather well and the Judge costumes are also on point. I dare say that it will be very difficult for the next films to top them here. They’re really on point and my only complaint is that they aren’t used very often.

It’s what I call the “Adam West” syndrome where you have a great concept but don’t actually use it for most of the film. This came into being with how they made two animated Adam West films and in one film Batman turned evil while I think Robin turned evil in the other one. As a result you really didn’t get to have the fun dynamic/type of story you were hoping for. It’s like this with Judge Dredd as well. It’s a great kind of adventure story to see him patrolling the streets and taking down criminals but after the first chunk of the film that is gone forever.

This is due in part to the main plot. See, the general plot of Judge Dredd is that he has been framed. Someone is using his weapons and since they are tied to DNA that means he must be the one who has been murdering people and committing crimes. Dredd believes in the law 100% so he’s also not really sure how to defend himself. A good chunk of the film is Dredd learning that maybe the law isn’t infallible and trying to work his way back into the city.

So the second half is still a pretty fun adventure but it isn’t really “Judge Dredd” the way that the first chunk was. I dare say that the film would have risen up to great status if it had just stayed like the opening bit. Ah well, maybe next time. The action stays solid in both halves although you do feel like the other Judges should be a little stronger.

Basically if you aren’t Judge Dredd then you won’t be doing very well here at all. We see around 100 Judges get destroyed by sneak attacks, bombs, and a giant robot. Given how Dredd is able to handle all of these guys you would just expect a little better. The film does warn you early on that some of these guys are weak though with how the cadet goes down.

So Dredd’s a great main character. He’s definitely all about the law even if he is rather strict with it. The guy was practically made for the job and takes it extremely seriously. Even when he is asked to go back to school the guy assumes it’s for some more hand to hand skills. He’s eager and that’s what you want to see in a main character. I definitely had no complaints.

Then you have Barbara who is the main heroine here. She’s a Judge as well and can certainly fight better than most of the others. I’d give her a thumbs up as well. She’s someone that Dredd could actually count on and that’s big in this kind of world. She did her best in the trial and gets a lot of good moments. The cast is fairly small so it’s important that the big characters did well.

Then you have Fergie who is the main comic relief. He gets a lot of good lines as well. The guy’s at his best when he’s rubbing the situation in to Dredd since he got captured early on. Fergie is not the kind of guy to drop a grudge, I can definitely tell you that. It gets a little cheesy when he actually defeats an opponent later on though so I always say you should keep comic relief characters away from the actual battling. Still, he served his role well enough.

Finally you have the main villain Rico. He’s the only one I wasn’t sold on. I think it’s in part because the guy relies on a ton of luck in order to win his battles. Without things going perfectly he should have lost early on. I find it hard to believe that he was even able to escape prison. That whole sequence will leave you shaking your head. It’s a good thing one of the villainesses liked him to get some babies ready for the experiments or that would have been another hurdle.

All of the villains seem to trust Rico despite the fact that he is completely insane. It just makes you wonder why. The worst is the villainous judge who was on board with the plan from the start and directly caused the deaths of 100+ judges. At the last second he suddenly wants to have some second thoughts. Cmon now, Rico was definitely not going to allow that to happen and this guy should have known that.

The only other decent judge was Judge Fargo and even he was a little too quick to believe in Dredd’s guilt. The guy needed to stand by his pupil through thick and thin. There are also a few random bounty hunters and thugs running around but these are all of the important characters to make note of. The rest are there to flesh things out of course.

Overall, The writing is on point with the film and with the fast pacing it is over in the blink of an eye. There are definitely some violent moments when people get blown apart but surprisingly it’s quite a bit more mild than you might have expected going in. Get ready for one character to go down shockingly quick after they show up near the end though. It’s almost funny in an ironic kind of sense since you were expecting big things here. If you want to check out a classic comic book film with some good action and adventure then I would recommend checking this one out. It’s aged pretty well.