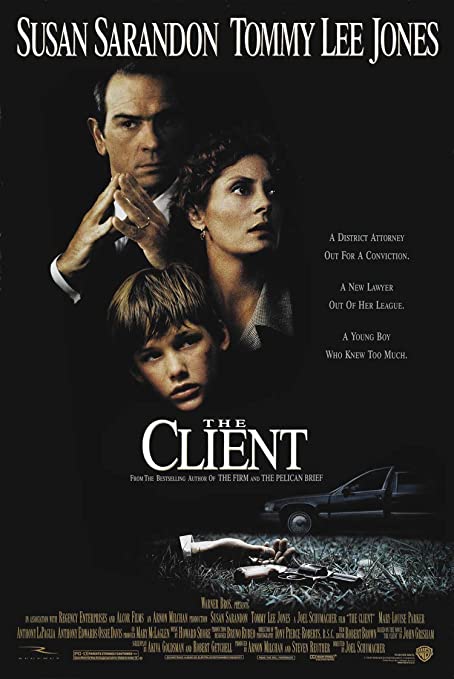 The Client is one of those films where you have different factions who are both technically good guys but they’re at odds with each other so you have to choose who to root for. Meanwhile the real villains are still on the loose so you have to hope that the heroes can take them down in time. The Client is definitely a solid film, one that would have been even better if the main character was older but still good all the same.

The movie starts with Mark and his brother Rick out in the woods when they see a guy trying to destroy himself using fumes from his car. Mark decides to prevent this from happening but ends up being caught. Fortunately he is able to escape right as the guy is blown up but this traumatizes Rick so that he can no longer talk. This ends up being a big deal because the guy who destroyed himself had the big testimony that was going to seal the case for Reverend Roy. Roy figures that he may have told the kid the location of the missing body that would be the ultimate proof to convict one of the gang heads known as Muldano.

Mark is approached by the mob and told not to say anything though or they will destroy him and his family. As evidence of their sincerity they burn down his home but of course nobody can prove it. Mark figures that he will need an attorney and hires a lady named Reggie. She is nice enough to be doing this case for free but how much can she help Mark when the guy is keeping so many secrets from her? The trial is in a few days so everyone is on the clock.

The Mob and Roy both want to be the first ones to the body to destroy or salvage it and they each have a hurdle here. The Mob knows where the body is but have a hard time getting past security to find it. Roy wouldn’t have that trouble since he is security but doesn’t know where the body is. That’s why the whole situation with Mark keeping the secrets tends to be annoying. I’m often not a fan of kids being the main character in a film like this and this movie really reinforces why that is the case.

There are a lot of scenes here where if Mark was a grown up then the film would have ended early. Strike a deal with Roy to enter the witness protection program or something and then tell him about the body. That would have been the best way to do things and would have ended the film in minutes. The problem is that he won’t tell anyone including his own attorney. I thought Mark was very ungrateful to her considering that she doesn’t even need to be helping him. Reggie does everything that she can but Mark tends to storm off every other scene instead of actually helping.

Suffice to say, he was one of the worst characters in the film. Any scene with him was one where he was impeding the legal process and just putting everyone into more danger than they needed to be. Reggie would have wrapped this whole thing up a lot sooner otherwise. Maybe tell her that a member of the mob broke into the hospital so they could get some more security around the place? That would have been productive at least. His mother’s also rather mean to Reggie for no real reason either.

Reggie is really given a tough task here but she still does her best to get to the bottom of this in every scenario. She talks tough to Roy during each of their confrontations and usually comes out on top. Only time she is left on the defensive is when Mark withheld more crucial info from her that Roy was able to find. It’s tough to defend someone when they give you fake stories all the time. Ultimately she did go with him to the dangerous spot to find the body and really came in clutch each time.

As for Roy, he was a fun character. I like the levels of confidence he brought with him to each of the hearings. It’s easy to see why he is known as one of the best in the business. When he has an opening he takes it and just rides this all the way to the end. He does want to get more political power but it’s clear that he has earned the position that he has currently. He studied a lot to get to this point and it’s all paid off quite nicely. Even in his first questioning with Mark he was able to defeat the kid quite handily. A few more minutes and he would have won if not for Reggie showing up.

The villain Muldano is more on the forgettable side though. There’s not really a whole lot to him. He flies off the handle too much which is what gets him into these jams in the first place. When the alarm went off in the climax his only hope was to quickly charge the heroes since fleeing would confirm that they got the bodies. Ultimately he wasn’t quite brave enough for this and that’s why he’s not the top boss of the mob.

The Client is really solid because the writing is strong. Put the kids to the side and you can really focus on the solid banter between Reggie and Roy. They’re both professionals on opposite sides of the fence here so they really have to go at it. The court scenes with the judge were a lot of fun as well. These bits don’t take up most of the movie but the scenes that we do get are really presented well.

We also get a good amount of thriller elements and a reasonably tense atmosphere that works well here. I don’t really have any big negatives here aside from the main character who was just really grating the whole time. I would have written him out after the intro scene so most of the big scenes were with Reggie instead as the mob goes after her. It would switch the movie up a bit but also ensure that all of the characters are solid.

Overall, The Client is a good film and I’d recommend checking it out. You really get to see the dangers of being a witness and ensuring that you have a good deal set up before telling all that you know. If Reggie wasn’t there to make sure of that, it seems like Roy’s team would have left the witness off to dry. In a dangerous business like this you have to keep your guard up and wits about you at all time. I’m always up for a film that deals with the court room so this worked out nicely.