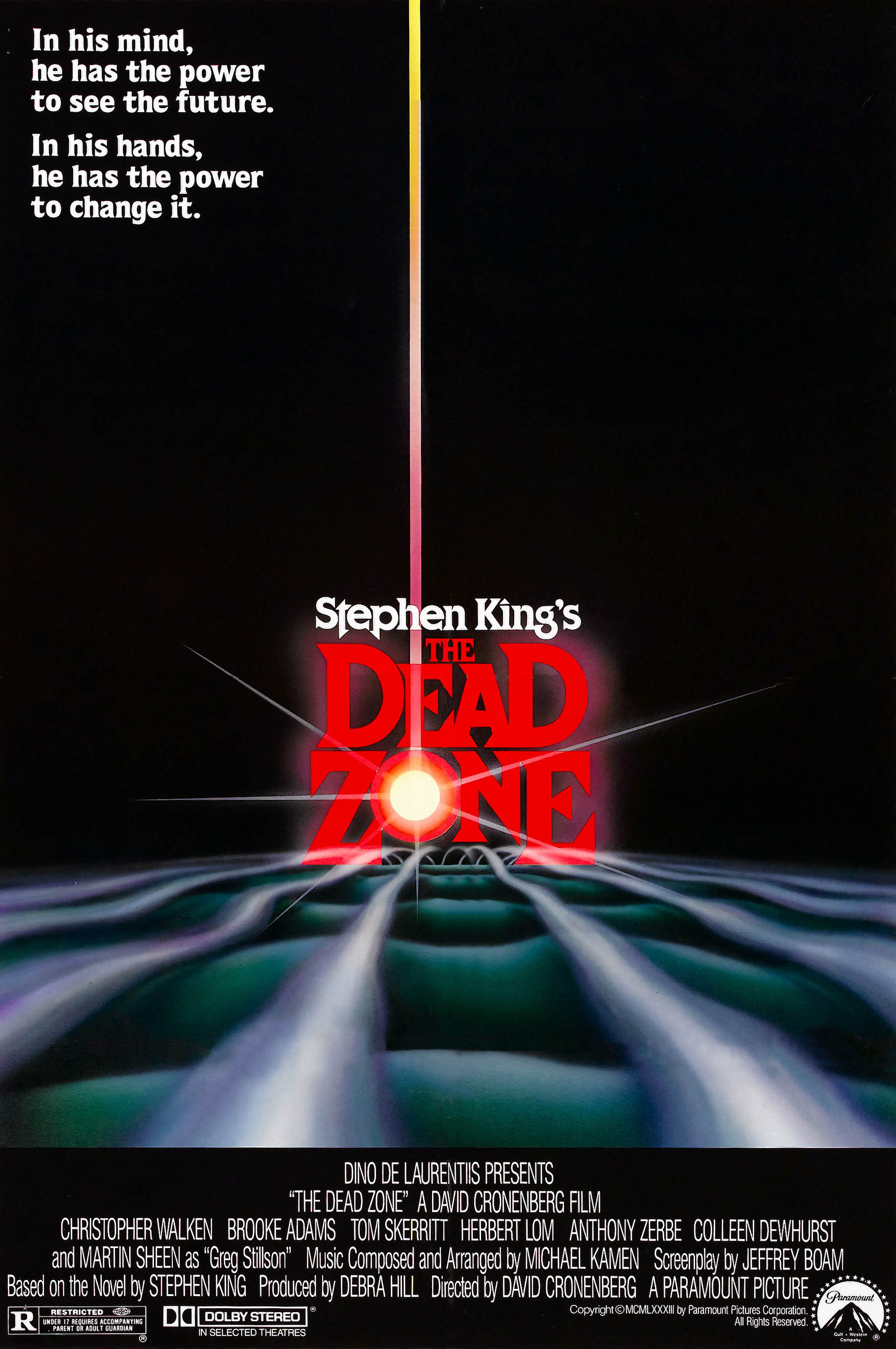 With a title like Dead Zone you are probably thinking of another world or a haunted area kind of movie. Well this one’s more about the block of time that the lead has to change the future. Of course this is difficult when you have no other superpowers since you have to really hope that your persuasion skill is on point. Otherwise nobody will believe you and bad things may ensue.

The movie starts with introducing us to Johnny who is a teacher that enjoys his job. He has a good position and a nice girlfriend in Sarah so everything is going well. One day he walks her home in a downpour and she reminds him to drive safely. With all of these red flags at the ready, Johnny embarks on this car ride and sure enough it ends up being a rather dangerous one. He crashes and falls into a coma for 5 years. When he wakes, Johnny is under the care of Dr. Sam and the guy explains that Johnny should be able to walk again soon.

Unfortunately this won’t be such a simple adventure for him as we find out that Sarah ended up marrying somebody else in the meantime. Additionally, Johnny now has super powers which allow him to see into the memories of anyone he touches. So if he grabs someone’s hand he can see a part of their past or future. It’s an incredibly useful ability in the right hands and a dangerous one in others. Can Johnny manage to utilize this well?

In a way the film serves as an anthology as he tries to help different people out whether by seeing the future or seeing the past. It’s a very versatile skill of his but you have to hope that he knows whether he is watching the future or the past as otherwise that could get a little tricky for him. Fortunately in the film all of the visions are obvious in that they are the past or future based on what is seen in the vision so that part isn’t really an issue.

Unfortunately Johnny is the wrong person to get these abilities. He was already a little unstable after waking up and this just made the issues even more pronounced. For starters, he cracks very quickly so when one reporter starts asking the hard questions Johnny goes straight into threatening mode. Then you have the mass murderer on the loose and Johnny decides not to help for a while.

Now granted, this is more understandable than the earlier panic attack because as part of how the powers work, he effectively relives the memory as a third party which can be pretty traumatic since he knows how the victims died. At least he does make the right call in the end even if he probably did get too aggressive in following the police officer. If he had stayed at his post and kept the mom under control then he would have been in the clear as far as injuries go.

Johnny also has a hard time letting go of his old flame Sarah to the point where she pretty much has a one night pity stand with him. Both of them are massively to blame on this because she’s married and both of them know it. Johnny really needed to find someone else because the 5 years may have felt like a day to him but it really wasn’t. Sarah is no longer on the market and so he shouldn’t even be trying for her.

Of course for Sarah this is inexcusable as well. There’s no way she should have even gone to his house if she had these intentions and bringing the kid along makes it even worse. It’s fully acknowledging that she is in a family and she is still doing this. As a result I would definitely say that the romance in this film is quite lacking. That aspect definitely could and should have been cut out since it doesn’t serve any purpose in the film other than to make the characters more unlivable.

So Sarah was no good and as you’ve probably guessed I didn’t like Johnny either. He doesn’t handle any of the situations very well at all. The security officer was good though, he was willing to try anything to put the mass murderer to justice. I’m sure he got a lot of heat for trying to use a psychic but that’s just how much he wanted to put this guy behind bars. He gets a lot of credit here.

Dead Zone holds itself back with how it has to add unnecessarily dark details though. The perfect example of this is how the victims die. Just have them be murdered in a normal way. That would be standard and would still capture all of the themes that the movie was trying to convey. Instead we are told they died in an incredibly gruesome way and it’s just details that we didn’t need to know and that should not have been included. It’s the extra details that tend to trip up films like this so sometimes just keep your plots general and it’s for the best.

In general Dead Zone isn’t even a super dark film. The case with Johnny trying to help the piano kid has a dark end but there is a silver lining in that he was able to help the main kid. So I wouldn’t consider it to be a very dark plot but has more of an ominous feeling since Johnny now knows exactly what his powers can do. This leads up to the final arc where he really begins to use his powers more actively. He comes up with a whole plan and everything. The fact that he is completely untrained and nearly comes out on top shows how different security was back then. You’re not getting anywhere close to the area with a big shotgun nowadays.

As for Stillson he’s a decent final boss to the movie. He certainly has a lot of ambition and keeps the characters in check. The scenes with him suddenly switch the whole movie to more of a gangster/mob type film which is interesting. Stillson has a lot of presence and makes for a good villain. I wouldn’t have minded seeing some more of him because he was just that interesting. The vision of the future also shows just how far he would have ultimately gone for his ambitions.

Dead Zone isn’t very violent for the most part. The early case with the mass murderer is really the only one with violence like when they catch the villain and of course the victims. The rest of the film is rather mild in that respect. The soundtrack isn’t all that memorable but I did like the camera effects for when Johnny was in a vision. It was a good way to quickly tell if you were in the present or somewhere else.

Overall, Dead Zone has an interesting premise since who wouldn’t like to have telepathic abilities right? Pure future sight isn’t super handy in this case though since you can’t use it on yourself and the film makes a decent case for why you would really not want to have this ability. If you just cut out the first case then I would say this was actually a decent film. Throw that in as well as Johnny’s relationship with Sarah and the cracks not only show themselves within the film but they burst it wide open. As a result I wouldn’t recommend checking this film out. Go watch something else instead.