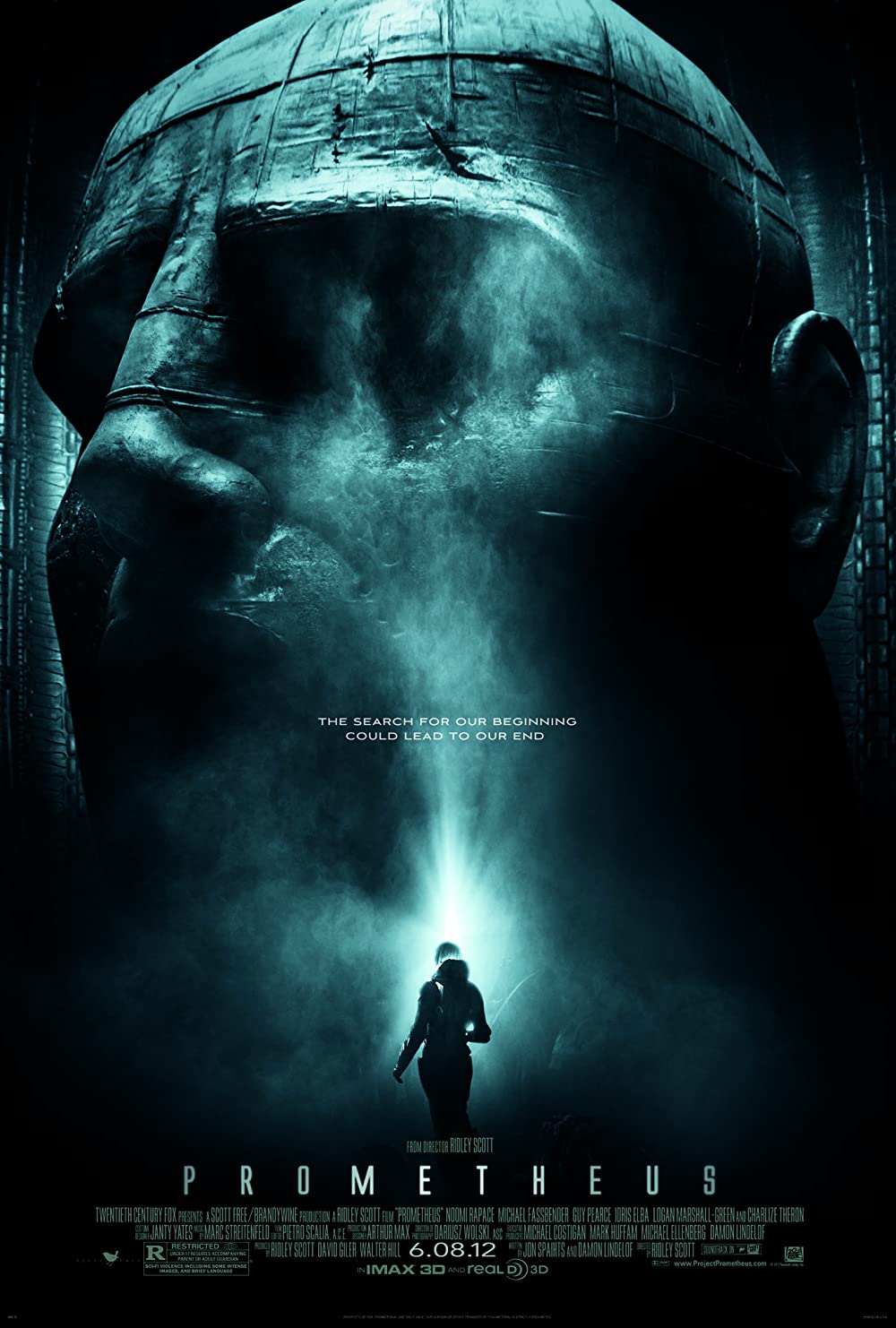 Prometheus is a film that I saw the trailer for more times than I can count. It just kept playing for every film in theaters and it always had a very ominous vibe. Creating a prequel to the alien franchise in general is a very move since the series is so well known for how cryptic and mysterious it is. This was definitely a very bold move and while it is interesting to see how the aliens were first developed, I don’t think the attempt was ultimately successful as you need Aliens in an alien film.

The movie starts off with a crew aboard the Prometheus getting ready to land on a planet to ideally meet their creators. They have a theory that the creators are here using some symbols from cave paintings. The evidence may seem flimsy but it’s the future so why not right? Meredith is the daughter of the guy who funded this expedition and she reminds them not to engage with any aliens they might meet and this is just a mission about exploring. She doesn’t think they will find anything though. Little does she realize that the team is about to run into something extremely dangerous.

Watching films like this where the heroes are stuck in space reminds me why I would never want to go on such an expedition. I’m quite fine on Earth and you have to be able to trust everyone 100% while in space. That seems like a difficult task for me because everyone always seems this close to cracking in these things. It doesn’t take long for the pressure to get to the characters after all.

In this movie the standout character is an android named David. Almost everyone on the crew seems to despise him because he isn’t human which I have to say does make them seem like jerks. David shrugs off the insults though and usually has a counter blow of his own. He makes for a very interesting character as it is hard to get a read on him. It’s also this trait that makes the humans distrust him as well. As the film goes on he continues to get more and more sinister.

The guy’s very interesting though and helps bring that horror element into the equation. At the same time, his super strength would be a good asset for fighting off these creatures. The only character who is actually kind to him is Elizabeth. She treats him like a real person and he saves her life at one point so she is grateful for that. Elizabeth is the real main character of the film. She’s definitely no Ripley but does well enough. She wants to get off of the island early on which was the right move but unfortunately the group doesn’t have such plans.

A strong positive for the film is also the impressive soundtrack. Not only is it the best soundtrack in the alien franchise but it’s one of the most impressive horror soundtracks I’ve heard. Aside from Resident Evil I’m not sure if any would beat it. The music is really grand and hammers home the surreal feeling of being on an alien planet. At all times you have some great tracks going so at least you will be having fun on the journey.

The movie does make the usual mistakes when it comes to alien films like this though. The violence is quite over the top with everyone getting destroyed once the aliens come out. The deaths tend to be quite painful as well as you have the chest bursters showing up as always and the aliens like to destroy the humans from the inside out. Much like the Carnage scene in the recent Venom movie, they tend to go in through the mouth at times with their attacks. I’d definitely rather they go for more conventional kills like with a bite or something instead.

Aside from Elizabeth and David, the cast isn’t all that good either. Meredith is basically just on the mission to prove herself as a high ranking officer but she doesn’t do a whole lot. Ironically I would say she had one of the most painless deaths in the film though. Surely getting squashed by thousands of tons of steel in an instant is better than living with an alien incubation or being torn to shreds right?

There’s Peter who is the old man in charge of the mission but the guy really should have known better than to come to this planet. There was a flaw in the plan all along. So the characters believe that humanity was created by a race of aliens and then abandoned to fend for themselves. Given this…why would the aliens be happy to see us? It should come as no surprise to see that they would be quite aggressive and that didn’t go over very well.

These guys are called the Engineers and it’s an interesting concept. So they are basically like androids that are more powerful than humans and have a good amount of geniuses on their team. That said, I think the film is trying to point out that creatures will always surpass electronics and so these guys don’t last too long against a creature. It opens the door for interesting side stories and maybe some Engineers vs Predator battles. I would assume the Predators would win that but it would be a fun fight.

The Engineer doesn’t do a lot and basically refuses to talk but this does make them an interesting enemy. There are a few more members of the crew but you already know that most of them aren’t going to survive. You’ve got the gung ho guy who is all set to learn about humanity but he’s quite mean to David which doesn’t bode well for him. You have the loud complainer who doesn’t even want to be here and the timid guy who is in over his head. Naturally things don’t go well for them.

There is one more likable character in Janek though. He’s the captain of the ship and knows when not to take orders from corporate. He’s willing to take big risks to help the characters and readily puts himself into harm’s way. I liked his determination and without him the Earth would have been in a lot of trouble. He gets some good credit for that and additionally even when he gets a lot of bad news, he never breaks down or cracks. He just keeps on going.

Overall, I’d say that the idea behind the prequel wasn’t bad. Seeing the start of how the aliens form is interesting but it also means that we don’t get to see any real aliens until the very end of the film which is really a shame. Classic Xenomorphs easily have some of the best designs in all of sci-fi. It’s really hard to top them and these little amoeba creatures don’t have the same impact. If you throw away a lot of the usual violence and everything then this could have been better but as it stands, it just isn’t able to break out into its own.