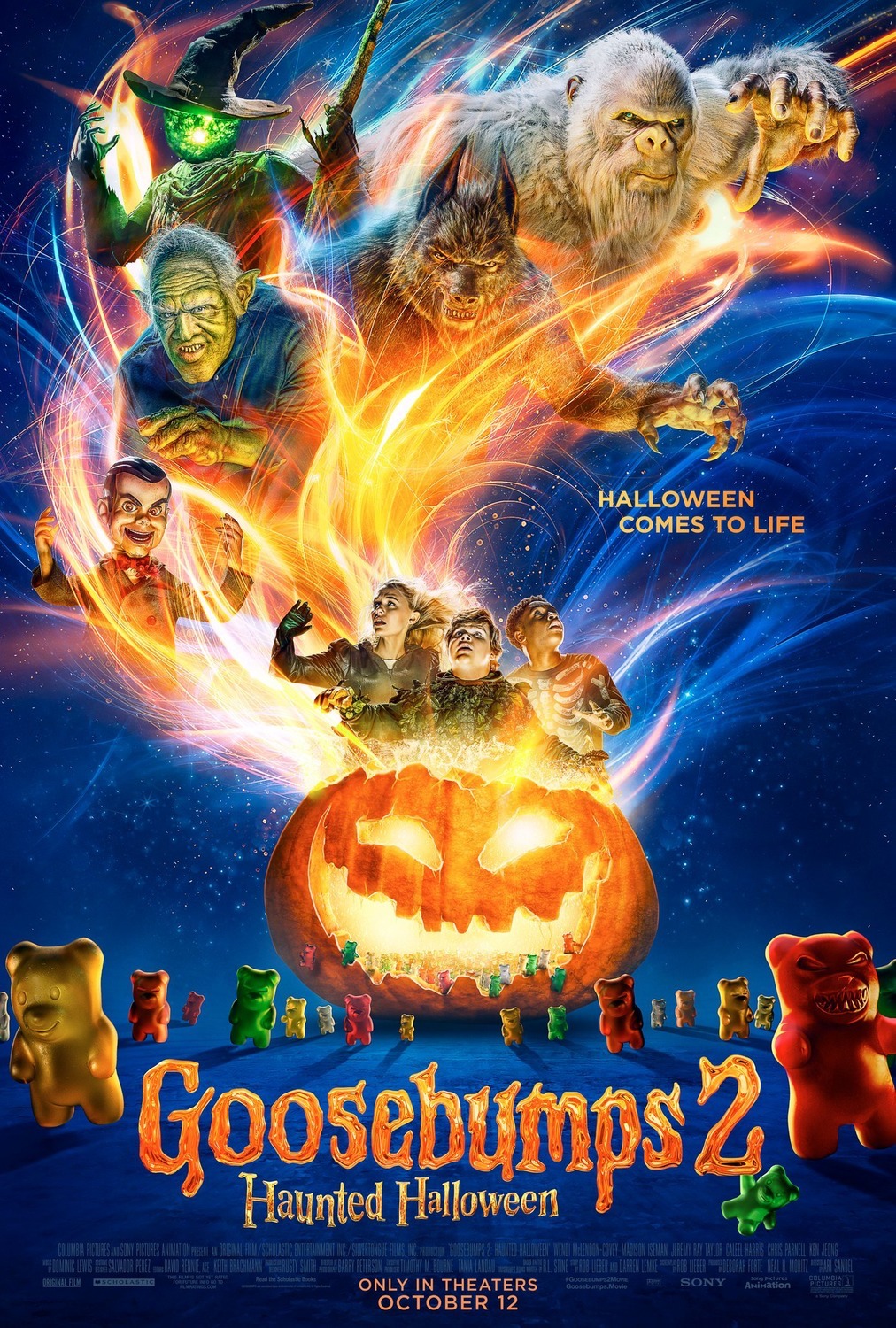 It’s been quite a while since I saw the first Goosebumps film, but now it was time to see how the sequel turned out. Slappy returns here with his biggest adventure yet. The kids will have to work hard in order to stop him and may even need Stine’s help for this round. It’s a fun Halloween title to check out and balances the action and comedy well.

The movie picks up with Sarah having trouble with her essay. She is usually good at writing but for some reason she just can’t seem to get into this assignment. Meanwhile her brother Sonny is working on a school project to demonstrate electricity but is having no luck with that either. His friend Sam suggests he takes a break on that to work on his new side job. Sam started a garbage picking up business in their name to earn some cash on the side although he has to work on his negotiating skills since he accepts the first job for free. They find a book and accidentally awaken the dummy known as Slappy. Slappy wants to just be a part of the family but does he have a hidden agenda her?

With a character like Slappy you’re always wondering if perhaps he could be on the side of the heroes if they let him into the family. Of course they have to be careful with this. The first red flag is that he wants the boys to keep him a secret from the others but also makes a lot of noises so people will notice Slappy. It’s a bit of an odd mismatch there and the main characters should have called him out on this.

Slappy quickly takes things to the extreme though as he humiliates some bullies and also beats up Sarah’s ex. The characters realize that Slappy is too dangerous for his own good and that’s really where the conflict starts. I will say Slappy definitely works as a solid villain. He really keeps the kids at bay and has a memorable laugh. It’s a catchy chuckle that you won’t forget by the time the movie is done. He may not have the same level of durability as someone like Chucky but this guy’s telepathic abilities are not to be underestimated.

Slappy summons up some minions to help him out as well but there’s never any doubt as to who is in charge. Most of the other villains don’t have much of a character. You have the store clerk who turns into a Hyde kind of monster. He’s the only other one with a role but I wasn’t a big fan of that guy. His romance with Kathy didn’t really work and felt a bit out of place in the film. As a monster he also didn’t seem quite as smart as he once was.

Stine’s role here is very small but it’s an effective one. I think the movie was having a bit of fun trolling the audience with how he is used. At the very least you won’t be forgetting his role by the time that it’s done which does show how memorable it was. The supporting character who really stole the show here was Mr. Chu. Chu takes all of the holidays extremely serious including Halloween. The guy has a whole army’s worth of costumes in his house and you feel a bit bad in how nobody really gives him any attention.

It’s clear that he would like someone to check out what he’s done with the place but the characters don’t give him the time of day until their lives are literally at stake. I thought they were a bit rude to be honest but Chu doesn’t take it personally and still helps them out the whole time. Definitely the kind of neighbor that you would want to have around when the city is in crisis mode.

As for the main characters, it’s a reasonable cast although I wouldn’t say I was a big fan of any of them. You have Sarah with her writing block issues and she isn’t the most responsible babysitter until she is betrayed by someone at school and then learns to put family above the others. She lands a good hit on Slappy and is more ready for physical confrontations than the other characters so she gets some points there.

Kathy is a bit oblivious to what is going on the whole time but granted, it is hard to jump to the conclusion that there are a bunch of monsters out there trying to take over the town. It is more sensible to think that they are all just wearing costumes as normal. After she is captured though I would have liked to have seen a little more urgency from her. Ultimately Kathy really goes down without a fight.

Then you have Sonny who is completely scared of Slappy right off the bat. I know a talking dummy is rather spooky but your best bet is absolutely rushing him and landing some quick combos before he can activate his tk abilities. Whether this is DBZ, One Punch Man, or Mob Psycho, overwhelming a mental specialist with physical blows is always the best way to stop this kind of fighter. Sonny just stays on the defensive the whole time which costs him. He also isn’t as pro active as Sam is in regard to earning money or even doing anything really.

When the bullies show up, Sonny is quick to surrender immediately while at least Sam is ready to fight back. So Sam gets a higher score here without a doubt. Sure he may not win the fight with the bullies but standing up to them is a very important first step. Now with the character critiques you do have to factor in that the movie is part comedy so of course the characters don’t tend to make the right moves a lot. Whether it’s a comedy or a thriller though, I’m still taking these decisions into account.

Slappy has the absolute edge in terms of ability an character over all of the heroes combined. They are really lucky that he didn’t pull out the win here because that very easily could and dare I say should have happened. There just isn’t any counter to him so as long as he keeps his guard up there isn’t anything they can do.

The film flies by very quickly and the pacing is on point. I was cool with the writing and while it isn’t earth shattering or anything, it was solid. I liked the various monster designs we got. The standout there had to be the gummy bear creatures. I liked the teamwork they used and their abilities are also versatile enough where you can see how they would be one of the more terrifying enemies to go up against. The first film has the edge in how sinister the designs were (The Werewolf was played more seriously in that film than any monster in this one) but this one went a little more all out with how crazy these creatures could be. It isn’t taken as seriously but there’s a lot of variety over here.

Overall, Goosebumps 2 is a pretty solid film. It makes for a pleasant watch and there are really no negatives here. The main cast may not be great but this is the kind of film where you are here for the villains anyway to see how they can scare the heroes at any point. The movie also has a true twist ending like a horror film and it sets up the third movie nicely. It’s really the perfect way to end the film and even if we don’t get a third film you can certainly imagine how things will go from here. I think it’s clear that it will be difficult or almost impossible to stop this threat.