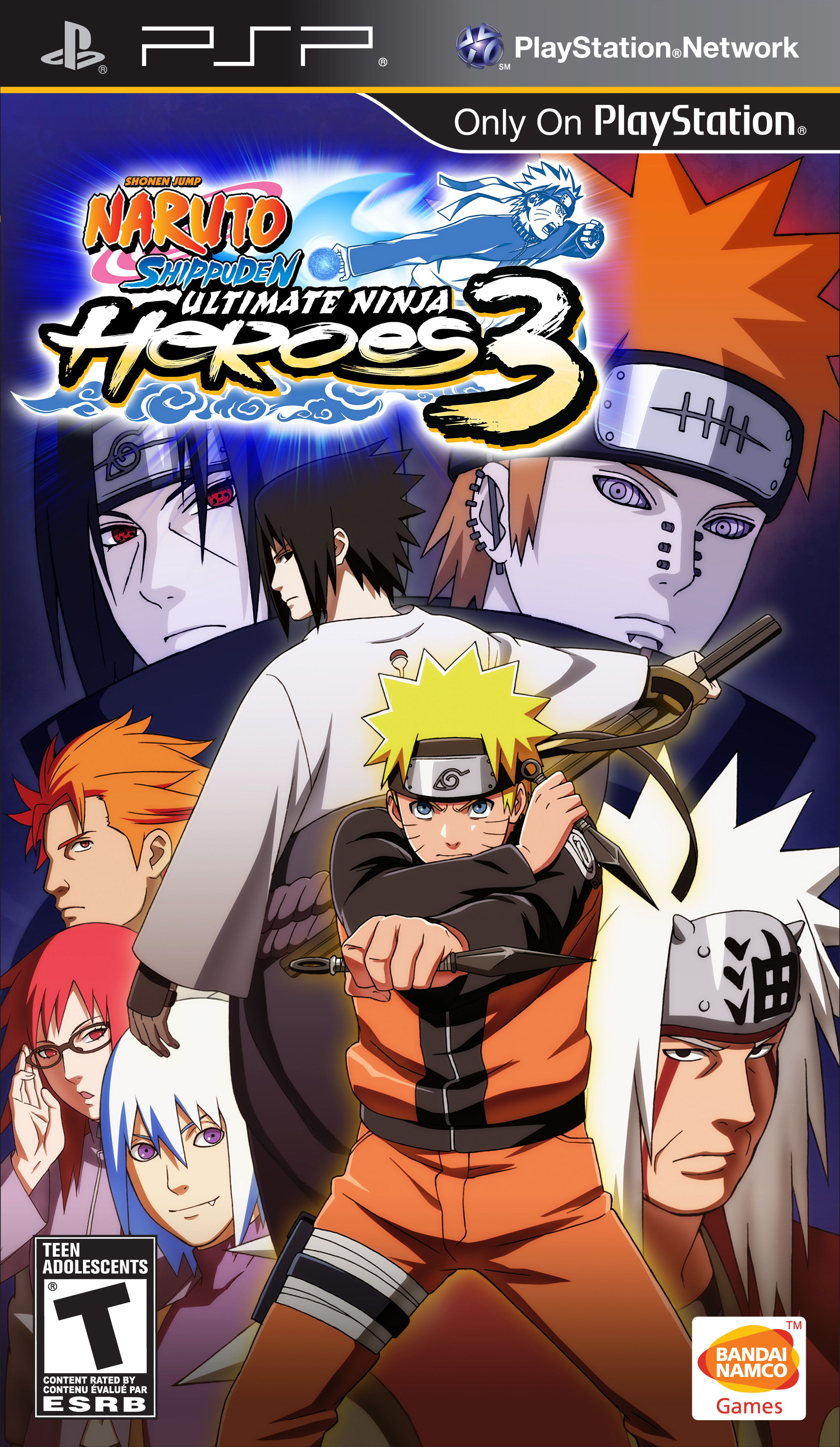 It’s been many years since I played the second Ultimate Ninja Heroes title but at long last it’s time to enter the third one. This one decided to add some platformer elements to the game which is a rather odd option but it reminds you of the old Ninja Council games on the GBA/DS. I don’t think it was necessary but it does help to pad the game out as with only fights it would have been really short.

The game follows the Shippuden story midway through Sasuke’s arc and also has an original story thrown into the middle where we have to fight a new villain group know as the Leaf Anbu. Unlike the normal Anbu who are some of the weakest guys you’ll meet in Naruto, these guys can actually fight rather well. They want to use their visual prowess to grab some of the secrets in the village and do something dangerous with them. Kakashi and Naruto will have to stop them from breaking in, but maybe it’s time that Naruto is told the truth about all of this?

The original story isn’t bad, it introduces some new characters and it’s all worth it for the climax where Naruto and Sasuke have a big team up. Yes, Bonds did it first where they had to team up in the movie but I was always underwhelmed by that title because it was so brief. It’s brief here as well but with the end of the world upon the characters, the stakes were so high that you can see why they went right down to business. The scene where Sasuke first shows up to taunt Naruto one last time was the highlight of the whole game. It just filled you with a great sense of excitement and you get to re live it later on when playing as Sasuke.

The game also deserves a lot of credit for having full voice acting. Every line is said out loud by the voice actors from the show and this is the kind of attention to detail that I like to see in any modern title. It’s crazy that even nowadays some titles don’t have full voice acting while the PSP pulled it off so many years ago. It really does enhance the experience and make the whole thing feel that much more real. The soundtrack also had some fairly good tunes. I wouldn’t say any of them are Earth shattering but they’re good enough to be noticed. The danger theme, Sasuke’s overworld theme, one of the battle tunes, etc. This was a very solid setup.

In terms of replay value the game is a little smaller in pure single player content. By playing through the game naturally I got over half of the collectibles in the game. The main story will take you around 10 hours to complete. Considering that this is most of the stages you should be able to clear everything within 14 hours or so I’d guess. Earning money will be the toughest thing in the end as you have to buy each collectible. That said, there is endless replay value for the multiplayer mode and as a fighting game you can always have fun just beating the A.I. since there are so many characters to choose from.

Naturally the graphics here are really solid. The character portraits are good and occasionally you’ll even get an illustration that looks just like a screenshot from the anime. The filler arc in particular was impressive here since you’d almost think there was an anime episode you might have missed. Most of the time there aren’t any true cutscenes but occasionally you will get a moving image like with Naruto and Sasuke’s combo attack at the end.

The gameplay remains rock solid from the first two games. It’s a 2D fighter where you try to overwhelm your opponent with ninjutsu and taijutsu. Use your combos well to win. The main thing that separates this from most fighting games is how you can use some energy to teleport away when being combo attacked and this can create a chain of teleports between you and your opponent as you both start teleporting everywhere. Your final smash uses up a lot of energy so while it does a lot of damage, you have to decide if it’s worth it since it will use up your teleport energy. Some good strategies to be had in the game for sure and some of the story levels can also be rather difficult when they pit you in a 1 vs 2 battle later on.

Then you have the platforming gameplay. You have to run to the goal, sometimes defeating enemies along the way. The actual platforming isn’t bad, you move and jump rather well with controls that are on point. That being said, it’s the combat in the platforming levels that isn’t very good. It’s hard to land any attacks because all minions have super armor and will just hit you through the blows. Your best bet is to use a ninjutsu on all enemies as it is the only consistent way to bring them down. There are spike balls and other kinds of classic platforming obstacles to content with but it’s very by the book. With most levels having a 60 second timer, you’re really done in a flash.

Overall, Naruto Ultimate Ninja Heroes 3 is a very fun game. It’s nostalgic in a sense as it reminds you of the old days of Naruto. It brings back all of the classic action you could want in a Naruto title and has solid voice acting, graphics, and soundtrack. This is the definition of a super solid game. At 10 hours it’s also the perfect length in that it’s just long enough where I wouldn’t say it’s too short. I’ll never turn down a game being longer but 10 hours is really the minimum length you should always strive for. It’s also good to see a fighting game with a proper story like this. It’s nothing new for anime related titles but many other franchises still struggle with this.