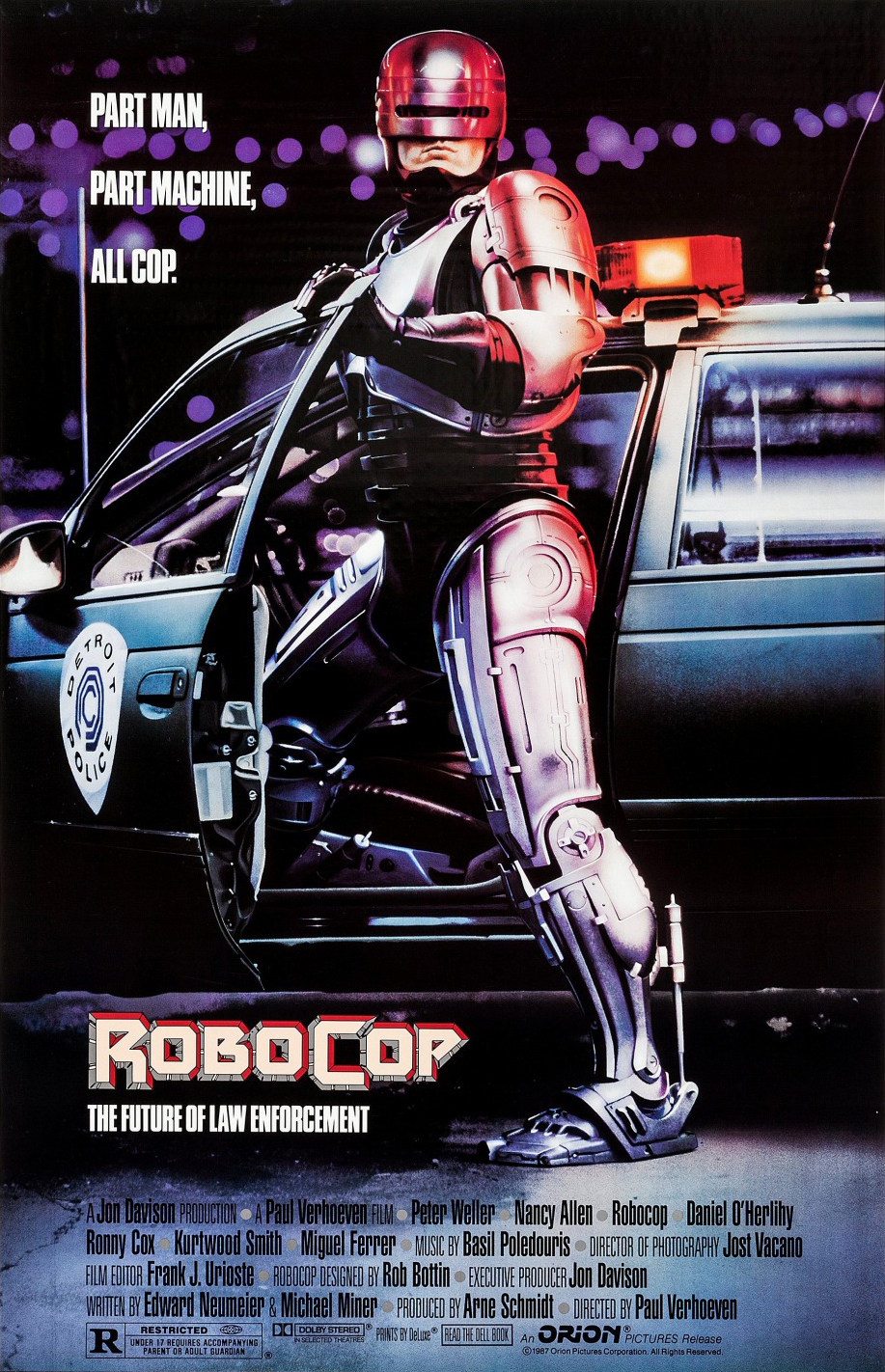 Robocop is a very famous character to be sure. Even if you haven’t seen the film you have likely heard of it in some way or another. It’s a movie that has aged rather well and I do agree with many that it beats the reboot. I enjoyed both the serious scenes of the movie as well as the moments that parody the media to an extent. Now those were some pretty fun commercials in there. All in all, it’s not a title you are likely to forget.

The movie starts off with corporate trying to find a way to cut costs. In this world they own the police force in Detroit but naturally they don’t want to pay them a whole lot. The police have even started organizing a strike. Their chief doesn’t like this but there isn’t a whole lot that he can do about it now that the union is on board. Unfortunately for Jones, his project doesn’t work so well and his robot murders someone. This allows Bob to get in and suggest his RoboCop project.

RoboCop is the process of basically turning the remains of a dead cop into this robotic police officer who will enforce the law. The timing couldn’t be better as officer Murphy was just gunned down by a group of gang members. While his memory should be wiped, RoboCop seems to remember his days as Murphy and his police partner Anne recognizes him as well. Will RoboCop be able to get past his sense of confusion to take down the gang and make the world a better place or is this game over for him? Additionally, with the OCP owning him and the cops, will he really be able to enact true justice?

I would really call this an action comedy because of how well the film executes on both genres. For starters you have the opening scene where the robot murders one of the board members. It’s a rough fate for the guy but I would say it’s still played for laughs and it works. These dark comedic moments are perfect in RoboCop and show how merciless the corporate world is. This scene doesn’t deter any of the workers there which is saying something.

I rather liked Bob quite a bit as an antagonist. He saw an opening and immediately jumped right in. He wasn’t afraid of Jones and talked tough right to his face. That’s the kind of resolve I want to see out of the up and coming villain. Things don’t turn out very well for him in the end but there wasn’t a lot he could have done. While I thought Jones would be a rather forgettable villain by the end, he impressed me with how he got his revenge later on. I’m telling you, this company does not play around and you don’t want to make an enemy out of anyone there. They all play for keeps.

The Chairman is also really good. He was extremely quick on the take during the climax which is ultimately how he kept his life. Otherwise that would have gone sideways for him very quickly and he would only be a memory. The actual main villain Clarence wasn’t as memorable though. He’s a rather unhinged guy who deeply enjoys his job but there still isn’t much more to him other than being a mobster. He’s like a C grade Joker. The guy does well in fights but he’s just not super interesting.

As for RoboCop, well he’s a fun character. I liked him quite a lot as Murphy so it was rather sad to see him go. The way Murphy dies in the intro was really effective. In large part because this is how you picture a lot of these encounters ending without any plot armor for the main character. You can’t just attack a whole gang on your own and expect to win. Murphy was just too hot headed in this case and it really ended up backfiring on him. It just felt very realistic, but definitely a painful way to go out.

In his transformed state, Murphy isn’t quite as hot headed as he used to be. He does keep some parts of his personality like twirling the gun but for the most part he is quite different now. He also has the disadvantage of being a robot owned by OCP so they can brainwash him at any point. Still, RoboCop does his best to dish out some peace to the villains and he does well. From the 3 films this is easily his best portrayal. He takes out a lot of thugs and is quite durable without being way too slow. He also thinks of good ways to get around his programming weaknesses. As for his partner Anne, she’s a good cop. Ultimately she wasn’t quite fast enough to help Murphy out but I would say she is solid. She just doesn’t get quite as big a role as you might be expecting. She provides moral support but that’s about it.

The effects are on point here and the movie has definitely aged well in that respect. If you’ve seen Judge Dredd, you’ll probably be thinking of that film a lot during this movie because of how similar they are. RoboCop is just a fun film all around. As mentioned earlier, the media parts are great too. If you focus on the news headlines behind the reporters you see a lot of interesting items and of course they report on quite a few stories. It shows how hopeless the world is with constant bad things happening. The movie really depicts a rather bleak world where corporate is running the Earth into the ground. Then you have the parody commercials as well which will give you some laughs.

Overall, RoboCop succeeds not just because it’s a fun action film but also because the writing is incredibly clever. It can give you a very powerful moment and then immediately hit you with a really funny moment. I like seeing corporate as the villains since they can be entertaining and this film adapts them well. We even get the full board meetings and the rushed version of RoboCop that isn’t quite so effective. I felt bad for the clunky robot by the end because he meant well but just wasn’t built for success. It even throws a bit of a tantrum on the stairs when trying to follow RoboCop. This just wasn’t his day. If you haven’t seen this film yet then you should definitely change that.