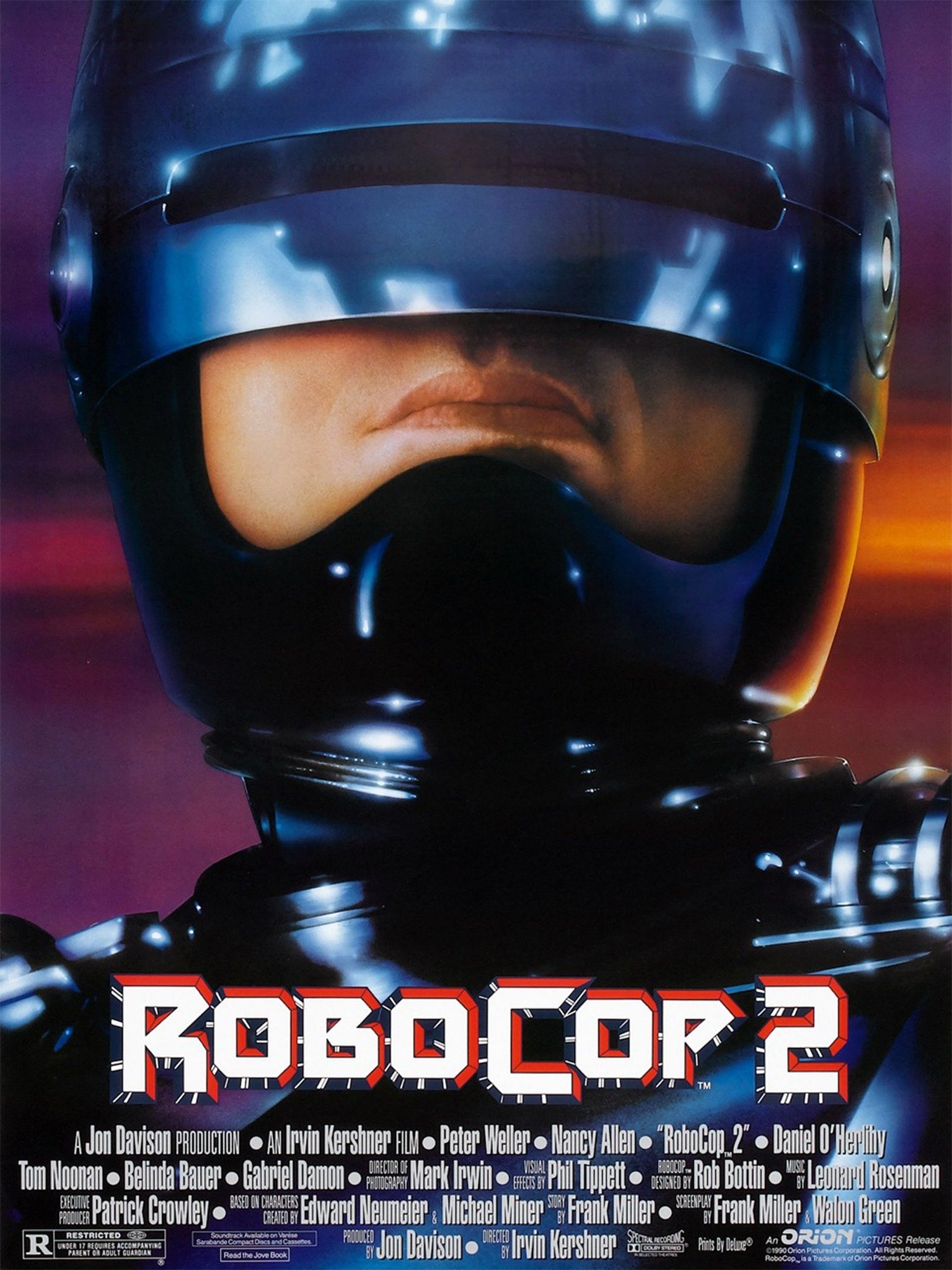 RoboCop 2 is the weakest film in the series. It still has its fun moments and memorable scenes but starts to show a lot of weaknesses that the first film just didn’t have. A lot of this you can trace back to the new main villain but it’s really a group effort in the end. He was only part of the problem, but I will say the film has a very solid group of opening scenes here which start the film off on the right note.

With RoboCop as the hot new item, OCP is pretty happy with how things have gone. Now Detroit is nearly penniless and they are ready to own the entire city. Still, RoboCop has been acting a little too much like an individual as opposed to a machine so it’s time to brainwash him again. (This guy seriously cannot catch a break!) After RoboCop is encouraged to break off ties with his old family for good, he’s beat up by the new gang in town led by Cain and a kid named Hob. If even RoboCop can’t stop these villains…who can?

First off, having a kid be one of the main villains is not a good idea. I can’t take Hob seriously at all. The fact that he is able to talk tough to the traitorous cop Duffy and some of the other villains just makes you shake your head. He acts like a big shot but he’s young enough where anyone could just slap him to the side. Of course RoboCop can’t do much against him due to the system blocking him from messing with a kid but it’s just an annoying way to go about it. At least have RoboCop grab him or something.

Of course, in this film RoboCop can only move with the speed of molasses so good luck with that. He walks into every trap imaginable and just doesn’t look impressive. Nobody should be scared of him if this is the extent of his abilities. Not only is he slow but he can take serious damage from even basic attacks. The villains just pull out some fancy guns and they have RoboCop on the defensive. That’s not a good look for the crime fighter at all and just takes away any hype he had built up before now.

The scene where the villains quite literally rip RoboCop to pieces is just annoying. Sure, I can buy into how RoboCop wasn’t able to break away since the magnet makes sense, but the scenes leading up to that are really something. It’s depressing to see his parts just thrown onto the street where the officers are on strike again. You want RoboCop to be treated with far more dignity than he is awarded there. The villains end up doing something similar to the traitor cop which is definitely a more graphic scene although mainly off screen so you just hear the buzz saw getting closer.

Can’t say Duffy was very sympathetic though considering how awful he was. Even RoboCop wasn’t really showing him any mercy during their fight like when he kept throwing the guy through walls over and over again. I guess he can at least flex against normal human opponents since they can’t really fight back. Anne doesn’t get a big role in this one. She tries to remind RoboCop of his humanity a bit but that’s all.

Meanwhile corporate has a new villain in Juliette since the old ones were bumped off. She is willing to do whatever it takes to get higher in the company whether it means having affairs, hiring thugs, or doing anything like that. She’s an effective villain even if she isn’t nearly as entertaining as the first ones. The corporate angle also appears a little less than in the first film but you still have the fun commercials and OCP just generally showing that they will cross any line to achieve their objective. That’s the kind of dedication among the villains that you need to see.

Cain is the main gangster even if I would argue the kid has a bigger role. There isn’t a lot to him though beyond just being a mean gangster. He makes the guy from film 1 look like a mastermind. Therein lies the problem here, every single part of this film is a downgrade from the first around the board. It even reuses some ideas like having RoboCop brainwashed again. Lets just say it won’t be the last time either. It’s why I would never want to be a robot since there are so many ways things can go sideways. It’s also bad when the company that created you is an evil one.

The kid is annoying as the villain and I would have liked the film to have moved forward and tried something different instead of just having the same kind of plot and nerfing RoboCop to make it work. A normal gang should not pose any kind of threat to RoboCop but of course it does since he is so slow and has no battle experience. It seems like he lost a lot of intelligence between films as well given how he falls for every trap. I would expect him to be able to carry himself way better than he does here.

The worst thing you can say about the film is that some scenes can almost be boring by the end. RoboCop gets to finally look decent by the end which is all well and good but it’s more of a consolation prize by that point. He’s looked so bad throughout the film that it’s just too late. Even the fact that he gets traumatized by the villains is odd. I know he can still feel things but getting traumatized by the shocks is a bit much. OCP’s local representative (Now he’s a fun character) isn’t exactly very helpful with this but the heroes shouldn’t need OCP for this. The first thing the heroes need to do is deactivate RoboCop’s pain sensors for next time unless OCP stops them.

Overall, RoboCop 2 is a big downgrade from the first film. It can still be fun at times and have good action scenes but for the most part it’s all about showing you how annoying it would be to become RoboCop. You have no control over yourself and would get crushed in every fight. Having the kid as a villain was really the last straw for the film. It’s bad enough for RoboCop to keep losing but it feels like he learns nothing from each encounter. Needless to say, things continue to happen to him in the third film which just shows that there was no lesson learned here. Lets not get ahead of ourselves though, that review will be next. I’d say you can safely skip this film but if you liked the first one a whole lot then you may as well check it out.