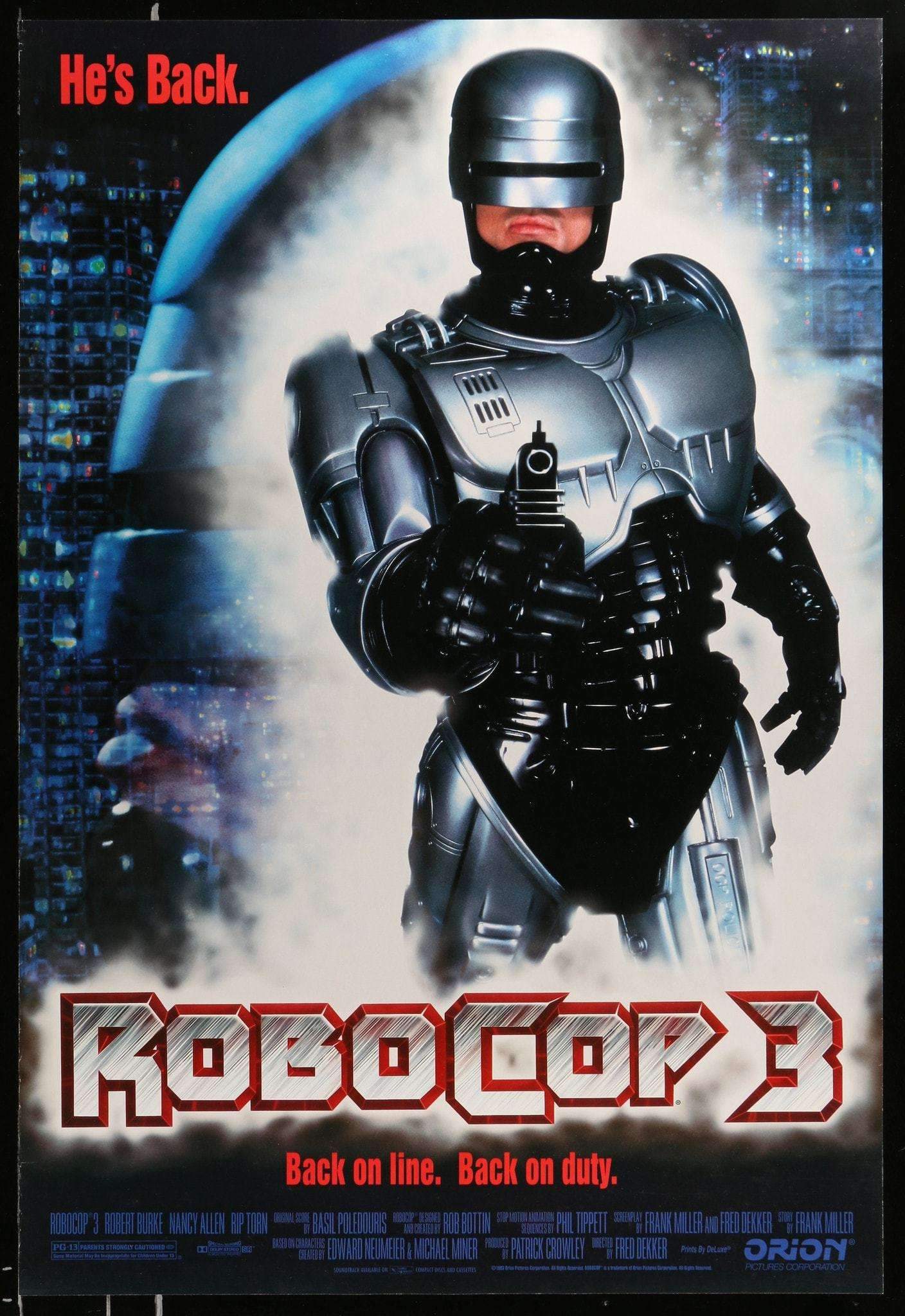 It’s time for the end of an era with RoboCop 3. The films have a strong continuity which I do like. We have seen OCP run the city of Detroit into the ground and by the 3rd film things are worse than ever. At this point the city seems beyond saving which leads into the current circumstances. We’ve now got another company in the running and the technology is finally catching up to RoboCop. It could be the end of the road for him.

The movie starts with OCP pretty much going out of business so they are forced to jump in with a Japanese company Kanemitsu who begins to take over really quickly. Together they create a more aggressive police unit that will strive to uphold the peace without robot members. Of course what they are really doing is pushing everyone out of their homes to try and earn more bucks by upgrading the places. Anyone who doesn’t want to move is taken away by force or destroyed. This leads to a little girl named Nikko losing her parents. Fortunately she is a computer genius so she is able to join the resistance and help them steals guns and other equipment.

One day, the army comes after her and the resistance so RoboCop defends them but of course he is easily dispatched and barely escapes with his life. He will need Lazarus to reprogram him so he can fight back against OCP agents but will even that be enough? He will have to get past Otomo, a Japanese android of unimaginable power who seems to be much faster than RoboCop. One thing’s for sure, he can’t afford to let his guard down.

Like with the last film we have a kid as a main focus here but this time it’s as one of the heroes. Nikko’s scenes are always rather cheesy though as she is somehow able to hack the greatest robots in the world with a few clicks of the button. She knows about Robocop’s specs and can even take out Otomo’s. There is nothing that she cannot do with her laptop which is supposed to be cool and all but it doesn’t seem likely. She really could have been cut out of the film entirely and that wouldn’t have been a bad thing.

The rest of the resistance members are around but the only big one is Keiko who serves as the main leader. She does well in rallying the troops. Without RoboCop around you get the sense that they would have been wiped off the map but it is hard to oppose the OCP so that makes sense. As it is, she kept them around for quite a while which is impressive. RoboCop’s partner Anne is around as well but her role is even smaller than in the second film. I doubt fans will appreciate how she looks here. It’s not a great appearance to be honest and even if her limited screen time is rather important to the film this time.

Otomo was very impressive, I think it’s about time we had a true robotic opponent for RoboCop. This guy was easily the most powerful opponent that RoboCop had faced thus far but there was definitely a big issue here. RoboCop is just too weak. It hurts the battle because it’s so lopsided that you know the only way for RoboCop to win is with significant plot armor. Look, a little plot armor can be fine but when you see how RoboCop isn’t even in the same league, it just makes you worry for how the fight will go. Sure enough, the ending isn’t very satisfying. Otomo was a great concept but in the end the execution was not on point.

McDaggett is one of the new villains and he’s fun enough. Definitely a step up over the last film. he’s one of those guys who certainly relishes being a villain and likes to do whatever he can to make everyone else’s lives worse. It’s hard to even say if he believes in his cause or if he’s just having fun with it on a power trip. Either way the guy is quite straight forward in how he acts around his goals and I prefer that over pretending to have some kind of high ground.

As for Lazarus, she’s a good scientist and it’s nice that Robo has at least one person in his corner. Ultimately she puts her career on the line to help him out and it shows that she is a loyal person who can be trusted. The fact that she is familiar with how his suit operates is really helpful since he now has someone who can run repairs on him consistently outside of OCP. Finally with RoboCop himself, well I still find the guy way too weak for his own good. He still walks into every fight as if he’s Superman. RoboCop doesn’t even try to dodge enemy attacks so he sits there and takes it every time. I would much rather he fights more tactically considering that he isn’t even all that durable.

He’s a good character but one who is way too overconfident. If you take away his battle performance, at least his intent is correct. Like when he decided to protect the civilians in the church. Yes he got wrecked in that fight but it was absolutely the correct move to save the there. Then you have the scene at the end which is something straight out of the DBS Broly film where he says that his friends call him Murphy but the villains can call him RoboCop. I thought that was a very epic way to end the film because he’s saying once and for all that he will oppose the OCP. You could do a lot of interesting sequels and such with this so it’s a shame that the films had to end now. I’m not sure if I would trust the mayor of Detroit if he is put back into power but surely he has to be better than the OCP right?

Overall, RoboCop 3 got back some of the shine it had been lacking in the second film. Not all of it mind you but this is a good start. It can be the cheesiest film though with the kid and even the media scene where one of the reporters finally has enough of this. That said, we get some fun fights and RoboCop’s jet pack was fun. The police going back on strike feels almost like a running gag at this point but at least this time they all walked out to oppose the villains which is good. In the final fight it felt like there was quite a body count though so hopefully they all went in with no regrets. None of the sequels may have caught up to the original but it was fun seeing all of these adventures. I’m glad that RoboCop was able to achieve a full trilogy since that is not an easy feat.