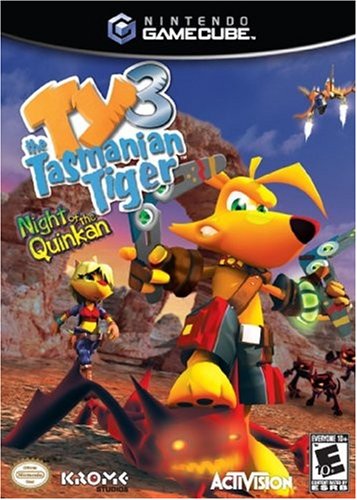 Ty and friends are back for another big adventure as we conclude the trilogy. This one takes elements from the first two games which is neat and I would even say that this is the best game in the trilogy. It’s really a good way to end things off and while there is one big quality of life update I would have liked to see, it makes for a very fun adventure all the way through.

The game starts with Ty and friends taking down a big alien invasion and it’s a very climactic opening. Just when it seems like the game is ending before it’s truly begun, Ty gets trapped in the wormhole due to an outside attack. By the time he returns to the real world, 6 months have passed. Bush Rescue is disbanded and the villains have basically taken over the world. It’s a shame how everyone has absolutely no heroic instincts without Ty. One of the members went off to be a professional racer while the world is falling apart! Well, Ty has to bring the band back together one last time to stop the Quinkan from taking over the world. Can he pull this off or is it already too late?

So from there you might expect a really focused plot with constant action but it turns back into game 2 where you have a bunch of stand alone quests from there. Where the game improves from game 2 though is that the missions feel far less like filler this time around. Usually they all end up tying into the story in some way or another. You’re always getting closer to the truth of the invasion and finding a way to stop the Quinkan. The hub world and map appears the same from game 2 so get ready for a lot of exploring. They’ve also brought the shop back but fortunately this time there are mobile vans where you can buy the upgrades at instead of having to go all the way back to base each time.

That does lead into my one main complaint though which is that we really should have had fast travel here. I guarantee that would have been an amazing quality of life update. See, you have to drive back and forth along a really big hub world after every single mission which can get old. The car isn’t super fast so you’ll be driving quite a bit and quick travel would have solved that entirely. I suppose you’d spend less time on the hub world but that’s fine by me. This just makes sense for any game with a hub world this big.

Not a super big deal and the game’s pretty short as it is so you’ll still be finishing quickly. The gameplay has some more combat moves this time around so aside from throwing the boomerangs you can also smack opponents. This does mean that sometimes you’ll punch an opponent instead of throwing your weapon by mistake since it’s the same button though. I would have put the different attacks to different buttons personally but you should be good since both attacks are strong anyway. I found the actual combat gameplay to be rather weak but fortunately it is rarely necessary. You can almost always just skip the enemies. There’s no level up system in the game so fighting them doesn’t really matter much.

The game is split up into several gameplay styles so you have the levels where you are in the ground but you also have plane levels and mech suit ones. For the plane levels, you typically have to bomb enemy installations and shoot at others. Then in the mech suits you have a lot of fights and powering up generators. My favorite levels were probably the mech suit ones, it’s just a lot of fun to be in the suit and spamming lasers the whole time. Now that’s a good way to just barrel through the levels.

The graphics are solid as expected. Some of the night levels can get a bit dark but the game knows how to build the atmosphere up well. The action in the cutscenes is really good too. I question how someone was able to outrun a laser in the final part of the game but sometimes adrenaline will help you pull off some really good feats I guess. Either way it worked and that’s the important thing. The soundtrack is good too, it’s really got that retro platformer feeling to it.

I also enjoyed the story. I think it would be even better if you would just continue the story each time without having to go through the missions structure, but at the same time it is really nice that every single cutscene is voice acted. I can’t state enough how impressive that is and it always makes me feel like the game had a good budget behind it. This makes the whole game so much more immersive than if there was no voice acting like that. Ty’s parents also get to step in near the end of the story but their role is super small so I wouldn’t blame you for wanting something more this time.

So in all this was just a fun all around game. The gameplay is fun and while the combat may not be the best, it is almost never necessary so you don’t have to worry about it. The level designs are fun and I liked the various bosses. The final boss in particular is quite a bit of fun even if I bluffed my way through most of it. I would definitely be up for a new Ty game someday. The boomerang gameplay would lend itself really well to some modern mechanics with that. I think they would be able to do a tremendous job of taking things to the next level.

Overall, Ty 3 is my favorite game in the trilogy and even has an emotional ending. If you are looking for a fun platformer or just want to see Ty and the gang again then you can’t afford to miss out on this game. It’s really got everything you could be looking for here and then some. There is also some replay value as you can buy the rest of the boomerangs. There aren’t a bunch of other levels to play but still enough where you can have fun running around the island and checking out all the sights.