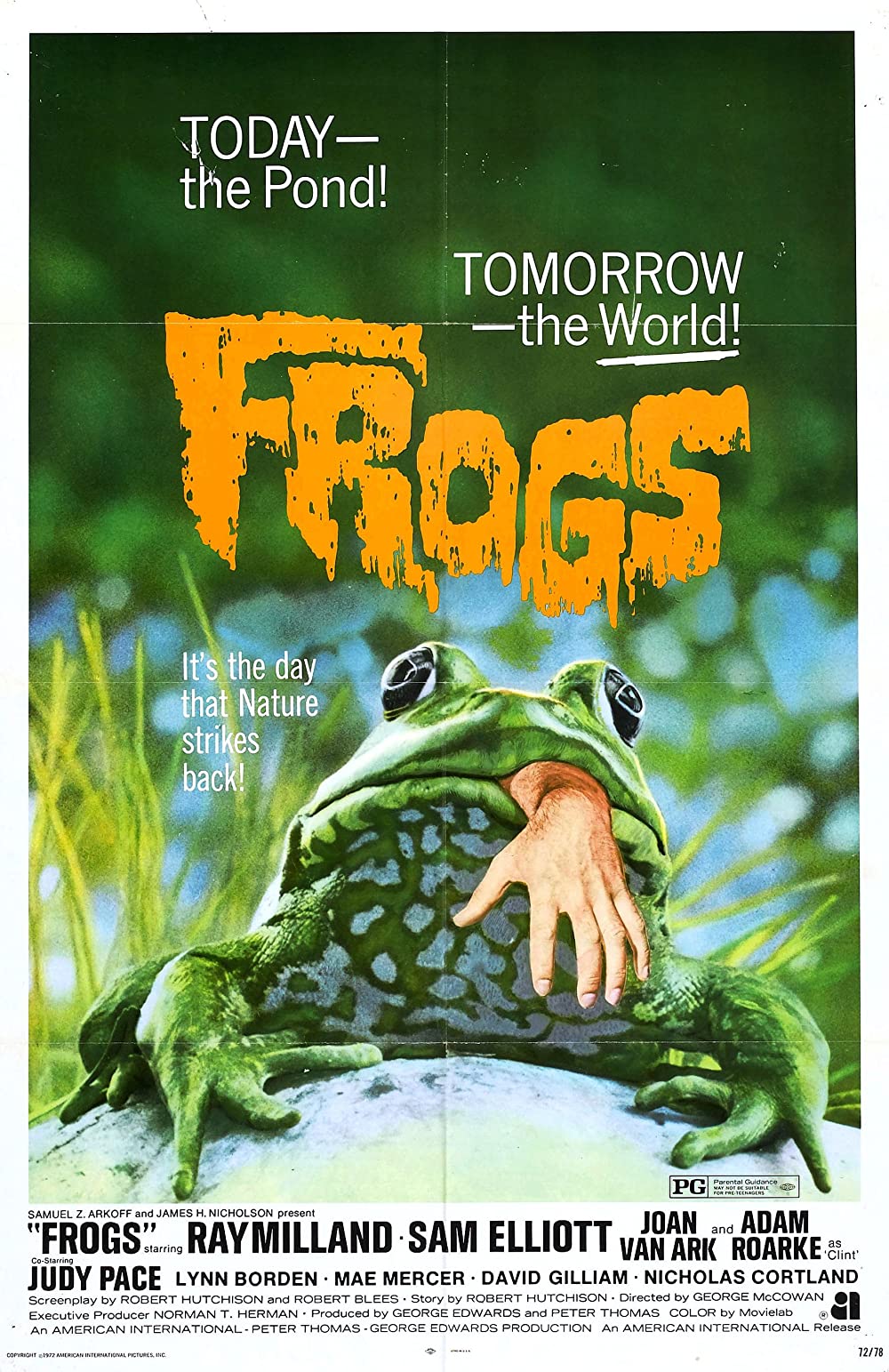 I have to say, I had my doubts about a horror film based on frogs. After all, that has a lot of potential for animal violence and generally not being a good film. Well, it ended up not falling into that trap so I was glad about that. I do think the title is incredibly misleading for the most part and I would have changed it personally. Not like a title is going to hurt the score though. I wouldn’t call Frogs a particularly good movie but it does enough to stay afloat which is far more than I thought possible from this sub genre.

The film starts off with Pickett minding his own business as he takes photographs of the local animals. Unfortunately his boat is tipped over by Clint and Karen who were enjoying a nice boat ride. They tell him to come to their private island so they can give him a nice meal to make up for this and send him on his way. This is actually a very special occasion as it’s Jason’s birthday and that guy is the captain of the family. When it’s his birthday everyone has to attend and make a big deal of it. Jason says that nothing will stop this birthday celebration. That is put to the test when the big family starts to get bumped off one by one. It couldn’t be….and yet….could it be the Frogs taking them out??

If you told me this film was part parody I would actually believe you. The way the characters react to their whole family being destroyed can feel unreal at times. Jason is absolutely true to his word about sticking to the party celebration. Even with multiple family members dead he keeps on with his plan. The guy is certainly the main human antagonist of the film but it’s so overdramatic that it’ll make you chuckle a bit. Absolutely nothing phases the guy which is really quite incredible. By the time he takes the threat seriously it’s far too late.

The death scenes are crazy though. One guy walks into the greenhouse. I forget why he was there, but it might have just been to mend the plants or he was looking for medicine. Well, a snake starts to slowly toss each of the ingredients to the ground which gradually causes a poisonous effect. Now this isn’t a subtle poison but an obvious one as the smoke ends up filling the room. This guy…..walks towards the poisonous smoke instead of away from it…even as he sees that the snake is dropping bottles. Sure enough, the snake keeps going so the bottles keep falling and that’s it. There’s just no escape at that point but it was probably the oddest way to go out.

A close second though is one lady is taken out by a snapping turtle. Basically she tripped and couldn’t get out of the way in time…but it’s a turtle! They’re so slow I dare say you could outrun one while crawling or being on the ground. Honestly you could probably even defend yourself really well unless I’m underestimating them. No comment on the leeches death though, I guess that one’s hard to get around if they’re draining you dry at a rapid pace. I can also say the alligator death would be incredibly difficult to get around. Once you’re in the water with it I don’t see a way out so I completely understand on that one. It’s very understandable that this is a fight you cannot win.

So each of the characters is bumped off but you’re probably wondering…what about the frogs? Well, the frogs are there but they just don’t do much of anything in the field. Instead they seem to give orders as they are constantly yelling to each other in that way frogs speak. It’s not terribly exciting but evidently it gets the job done so who am I to argue with the results right? Having the frogs be the masterminds behind this whole plot is definitely interesting but I would have liked to have seen them fight more. I think the writers were probably wondering just how a frog could destroy somebody. Personally I’d go the poison route, like it’s so strong that the person can’t break free. That would work well enough.

Knowing that the characters are mostly all doomed, it’s hard to get attached to any of them. Pickett is the main character here and he’s reasonable enough I guess. He tries to stay out of the family drama for the most part which is really a smart move. At the same time, he’s trapped on the same island as the rest of them so there really isn’t much of an escape either. He’s just going to have to ride this one out and it’s tough to get off of an island like this when your enemies are all over the ocean. That’s something he has to deal with right from the start.

Clint didn’t seem like a very good guy. He wants to please Jason so that he’ll get the inheritance and unfortunately he chooses that over defending his wife. Then you have Karen who is easily the most reasonable member of the group. Unfortunately she is also hesitant to stand up to Jason which means that she delays the group in leaving until the last possible moment. That definitely doesn’t help matters for their chances of survival.

The film has a good twist ending but the problem is that it’s before the actual ending. Usually you want to have the twist at the end, at least that’s how I figure you would want it right? That’s not actually the case here though. It’s still a really good twist and I like how nonchalantly it’s handled but this absolutely should have been the final scene in the film. That would have really left a huge impact with the audience. It sets up the sequel quite nicely and that’s really how you want a horror film to end.

So, is this film taking itself seriously or is it a parody? Well, ultimately I do think it’s taking itself seriously and the victims are unironically making all the horror movie mistakes. Splitting up, tripping, etc. It’s just some of these decisions will really be having you scratch your head at how it all plays out. It’s also just a little hard to take Frogs seriously as the main villains even if they are having the rest of the animal kingdom helping out.

Most of the deaths aren’t really that violent. This is still part horror-thriller though so you can expect some painful ends. It has more restraint than most titles like this though so it should get some credit there. The writing is okay, nothing spectacular but I thought the characters were decent enough. The film will manage to keep your attention the whole way through too. You’ll even feel sad when the frogs end up crushing the birthday cake and all of the festivities. Those guys really were not holding back here!

Overall, Frogs may be a film that will have you chuckling half the time but it really does mean well. I think you may like it partially in an ironic way but that’s still enough to get it some points. I wouldn’t call it a bad film even if it’s really not very good. That’s why I have it squarely in the middle. You’ll have some fun with it, the film’s got good pacing so it doesn’t drag on and the film really goes all in on what it’s trying to do here. At the same time there aren’t many memorable characters and even fewer likable ones. There’s nothing about it that particularly would make it stand out as a good title.