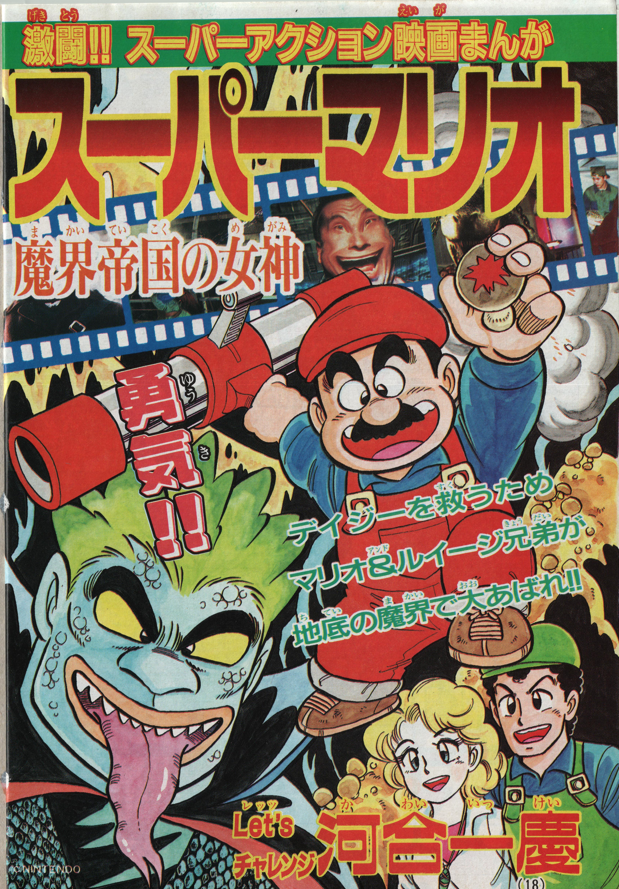 The title is a bit misleading I’d say. Daisy never comes close to being the goddess here but the title sounds epic I suppose. This oneshot is a quick adaption of the Mario movie and it’s pretty fun. It’s odd to see Luigi as the brave one of the group but perhaps it makes sense since Daisy is the main heroine here instead of Princess Peach. All in all, it probably won’t change your mind on the film if you’re not a big fan but it’s a decent story here. You’ll finish it very quickly without a doubt and while it may not feel a whole lot like the game versions, it’s a decent AU.

The story starts with Daisy calling Mario and Luigi over to fix her pipes. Unfortunately a pair of hooligans take the chance to kidnap her. They jump into a pipe and take her to meet King Koopa. See, Daisy is the daughter of the lady who stole a fragment of the meteor which split the human and dinosaur realms apart. If Koopa can grab a hold of that and put it inside an artifact, he can re-merge the two planets back together. He is confident that his army and weapons would then be enough to take over the world with ease. Mario and Luigi are humanity’s last hope now. Can they really defeat Koopa though?

While the story is short, there’s a lot going on here. The details are usually left out so you have to try and figure things out on your own. For example, why did the planets split into two dimensions when the meteor struck? You’d have thought that everything would have simply blown up so that didn’t make a lot of sense but it was interesting. Then with the key, it is apparently too potent for the villains to hold for a while as it burns two of them but why can all of the heroes hold onto it? We can try to say that it’s about good intentions or something but that’s pure speculation. I don’t know how Bowser had this contraption set up to re merge the worlds either.

Then with how easy it was for Bowser’s minions to go to the human world, why does he needs to merge the worlds anyway? I get that he wants to rule the world but it seems like he already rules the other world so in that case couldn’t he just rule both worlds? It would probably be easy to rule the humans with the advanced tech that he has at his disposal or it seems like that would be the case at least. So the manga will definitely give you a lot of questions but I suppose this isn’t all very important.

At the end of the day, the characters are fun and the writing is good enough so it makes for a decent oneshot. I think Bowser has the worst design though. Not only do they just keep calling him Koopa the whole time but he just looks like a guy with warts. There’s no real attempt to make this guy look like Bowser and it’s just sad. The design does not age well at all. At least Mario and Luigi have the general builds at the ready even if their caps are gone. As mentioned before, Luigi is the brave one this time. He was eager to jump into the pipe to save Daisy and didn’t hesitate during each part in the chase. Mario was the one who was unsure and needed to be dragged along.

Mario does get his battle with Bowser where he looks brave enough though. Using explosive mushrooms to take the guy down was clever and an interesting interpretation of the fire flower. Seeing Bowser get blown to bits is also surprisingly intense. Granted, Bowser is made of sludge here so that helps but even so, you see Mario just blasting away limbs which is intense. Apparently Bowser has high speed regeneration here which is interesting though. Then of course you have his gun which can send people back to their past selves which seems like an incredibly handy tool. It’s a 1 hit KO if you hit someone because you just keep the ray on and it keeps going until the person is no longer alive.

The art is okay even if I don’t like the designs. It can be a little hard to follow once in a while because of how the manga seems to skip ahead though. It doesn’t want to waste any time and as a oneshot I can definitely understand why that’s the case. At only around 30 pages you’ll be able to read through the story very quickly. The ending leaves room for a sequel although I can’t imagine any scenario where we ever get back to this continuity. There are just too many solid games to adapt and other styles to go with.

Overall, This story is okay. It’s certainly poor as an adaption of the Mario games but if you take it as a stand alone story then it works better. There isn’t anything that the manga does particularly well enough for it to be noteworthy though and that’s what keeps me from calling this one pretty good. It’s not bad but I just don’t see you ever going back to re read it. It’s an adventure that you read once for the novelty and then it’s gone. At best I can say that I do think it was going for a TMNT vibe in a lot of ways. It just doesn’t manage to capture that same level of charm and Bowser is a really weak antagonist here. I usually like the guy but not so much in this adventure. If you really want to relive the Mario movie experience then you should jump in and check this one out. It does have a little more action than the movie version which is always a nice plus.